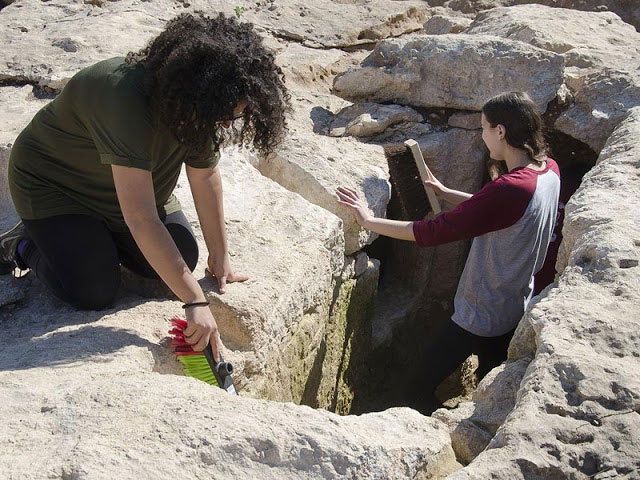 Some 240 eleventh-grade students from Jerusalem’s Boyer High School have discovered an original and rewarding way of reducing their travel costs to Poland: Working for an entire week on archaeological excavations at Ramat Bet Shemesh, far from their computers and air-conditioned classroom

The students have been involved in unearthing exciting archaeological finds at the site. In recent months, the remains of a Jewish settlement dating to the Second Temple period at the site have been found to include an extensive complex of ritual baths and underground hiding refuges. The excavations are being carried out with funding provided by the Ministry of construction and Housing prior to the building of a new residential neighborhood in Ramat Bet Shemesh, in cooperation with the Israel Antiquities Authority and with the participation of pre-army course cadets.

The settlement, whose ancient name is unknown, has so far yielded eight ritual baths, cisterns, and hiding refuges, along with rock-hewn industrial installations. The houses themselves have not survived and their stones were taken to construct buildings in later periods. According to Sarah Hirshberg, Shua Kisilevitz and Sarah Levevi-Eilat, excavation directors on behalf of the Israel Antiquities Authority, “The settlement’s extraordinary significance lies in its imposing array of private ritual baths, which were incorporated in the residential buildings. Each household had its own ritual bath and a cistern. Some of the baths uncovered are simple and others are more complex and include an otzar, or collecting basin, into which the rainwater would drain. It is interesting to note that the local inhabitants adhered strictly to the rules regarding purity and impurity.” Underneath the dwellings and rock-hewn installations, another surprising discovery was unearthed, dating to the time of the Bar Kokhba Revolt (2nd c. CE)—a winding labyrinth of hiding refuges connected to sophisticated and elaborate complexes. In some of the underground complexes, the rebels breached a cistern to provide those in hiding with access to water. One of the caves also yielded intact ceramic jars and cooking pots that were probably used by the rebels. The finds show that the settlement continued to exist even after the destruction of Jerusalem in 70 CE.

Minister of Construction and Housing, Yoav Galant: “Past and present are coming together in a city that has known division and now lives in harmony. We will soon be signing a roof agreement with Bet Shemesh to ensure future development. There is nothing more positive than the fact that students learning about the attempt to annihilate their people are involved in strengthening our ties with Israel and remembering the generations of the past.”

Israel Antiquities Authority Director Israel Hasson said, “Youth delegation visits to Poland are a way of raising awareness of our history as a people and strengthening values of commitment and mutual responsibility, but it is no secret that travel costs are high and some find them difficult to finance. As part of the Israel Antiquities Authority’s activities aimed at making young people more aware of their roots, in cooperation with the Ministry of Education, we invite schools to participate in the excavations and in this way significantly reduce travel costs. As well as learning about their heritage, the students are thus already learning valuable lessons about giving and mutual responsibility in Israel.”

According to Dudi Shokef, director of the Poland delegations program for the Ministry of Education, “The aim of this initiative is to impart the heritage of the past to Israeli students by integrating them into a valuable educational project, such as excavating an archaeological site.” He believes that participating in an archaeological dig, which involves the actual unearthing of archaeological finds, can help forge an emotional and experiential connection with the past and its heritage, developing a sense of belonging to the land and an awareness of the importance of preserving its antiquities.

According to Dafna Menashe Baruch, Principal of Boyer High School “This unique project, which connects the country’s past and Israel’s heritage with Holocaust studies and the journey to Poland, provides students with an educational experience in which they are exploring and investigating. By stepping outside the classroom and working in the field on an archaeological dig, students are exposed to many different worlds of knowledge; in addition to working with their hands, they get to know about a fascinating field of research. This is a great privilege and an unforgettable experience and we are full of appreciation and thanks to the staff of the Israel Antiquities Authority and to its director for initiating this valuable educational program that connects the past with the present”.

According to Dr. Amit Shadman, the IAA district archaeologist for Judah, “In consultation with the Ministry of Construction and Housing, we have decided that the excavations will be followed by the site’s preservation and development as an archaeological site in the heart of the new neighborhood.”

In antiquity, Judaism was already unique in its strict adherence to bodily cleanliness, as commanded in the Bible: “And bathe his body in water, and he shall be clean” (Leviticus 14:9). The act of bathing for purification purposes is also referred to in Hebrew as tvila, or ‘immersion’. During the Hasmonean period (second century BCE) there was an increased emphasis on observing purity (“ritual purity was widespread in Israel” – Tosefta, Tractate Shabbat 1:14) and a detailed code of religious laws was compiled to implement the biblical commandments in everyday life. It was during this period that special water installations, or ritual baths, began to be used for immersion.

The ritual bath is a water installation that is unique to the people of Israel. In order to fulfill their religious and spiritual purpose and cleanse a person of any impurities, the baths were installed according to Jewish religious rules. The bath has to be hewn in the bedrock or connected to the ground; it must be sealed so that its water will not seep out; and only rainwater or spring water must be used, as opposed to ‘drawn’ water.