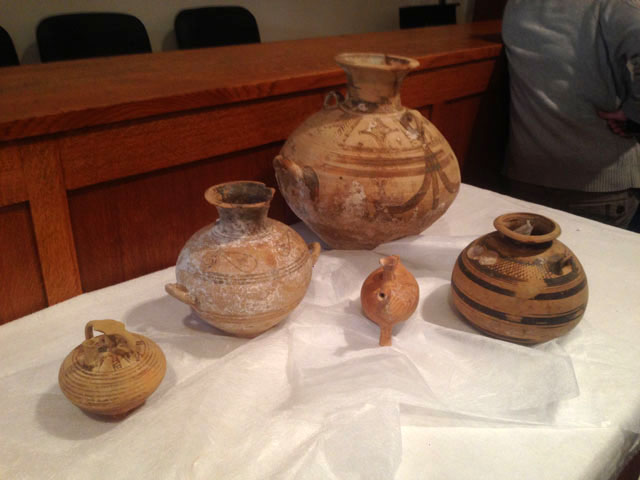 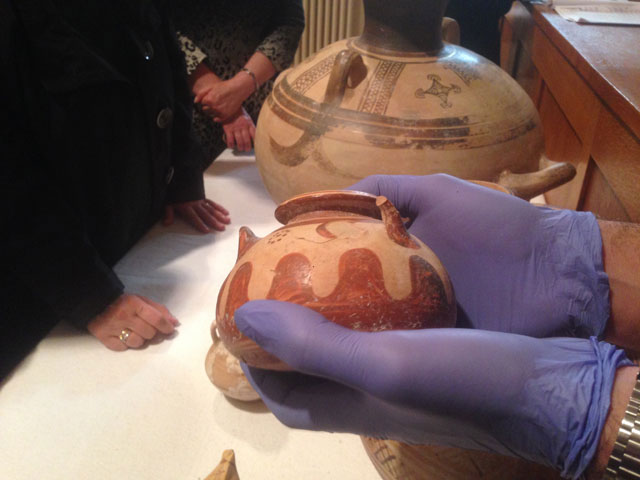 Archaeological treasures have been repatriated from Germany to Greece

They were transferred to the National Archaeological Museum

The 33 ancient artefacts and 600 coins, which have recently been confiscated  in Munich were presented last Friday for the first time at the National Archaeological Museum of Athens. The archaeological trove had fell into the hands of looters. The eight boxes containing the archaeological treasures, which were transferred in total secrecy from the German town, were opened in the museum’s amphitheater, in the presence of minister of Culture and Sports, Lydia Koniordou. The Greek news agency ANA-MPA has recorded the procedure of the boxes’ opening, where the objects had been carefully put, until their handing over to the museum’s conservators. It should be noted that most of the objects are in a very good state of preservation. These are mostly stirrup jars, bird vases, also a clay statue with charioteer and two jockeys, as well as miniature objects, the majority of which date back to the 12th and 13th c. BC (based on the preliminary evaluation of the archaeologists) and possibly come from graves of northwestern Peloponnese.

Mrs. Koniordou stressed that the confiscating and the repatriation of the artefacts and coins was a “very big success of the Greek and the German police, that have collaborated excellently well in a joint effort, in which the Consul General of Greece in Munich has significantly contributed”.

The minister specified that 33 of the artefacts date to the Late Bronze Age and have very interesting shapes and motifs, while the majority of them seem to have been produced by the same pottery workshop. Furthermore, there are miniature objects of the Geometric period, genuine masterpieces, and 600 coins. “It is an non-negotiable principle of the Greek state to stamp out looting and protect […] cultural heritage. It is our will that these illegally acquired treasures be returned to the places where they were stolen from. We are already discussing the presentation of these antiquities to the public, in due time and in the proper manner, so that they can be admired”, Mrs. Koniordou added.

The finds, which were linked with the antiquities smuggling ring that was “dismantled” last October in Patras, were transferred to the conservation workshop of the National Archaeological Museum. An evaluation committee has already been set up to deliver an opinion about the authenticity and value of the artefacts, in accordance to the provisions of the archaeological law.