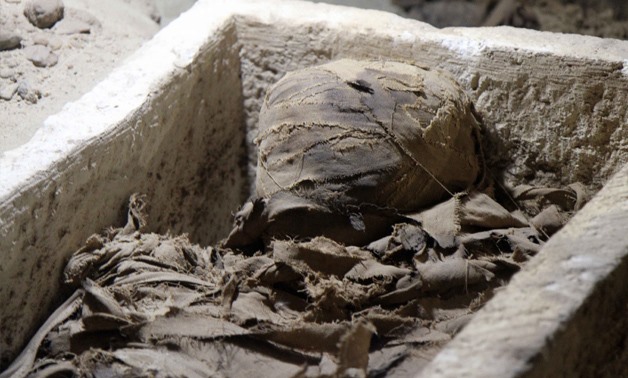 An archaeological team from Cairo University discovered a human necropolis, around 30 mummies and some coffins, vessels, demotic papyri  at the Tuna Al-Gebel archaeological site in the Upper Egyptian city of Al-Minya.

The discovery is the first of its kind since 1950 when Egyptologist Sami Gabra discovered a burial site of ibis and baboons. The official said the new discovery was made inside an eight-metre deep burial shaft in the desert.

The discovery was described by Cairo University professor of Egyptology Salah al-Kholi as the “first human necropolis found in central Egypt with so many mummies.”

The discovery can not be compared to that of the catacombs of Alexandria.

The finds include eighteen non-royal mummies.

During a press conference held near the in Touna el-Gebel district, which hosted the discovery, the ministry said that burial shafts were found in the area, adding that the shafts led to a number of corridors inside a cachette of mummies.

Tuna el-Gebel in the city of Mallawi was the necropolis of Khmun. It contains monuments from the Greek and Roman eras, as well as the Late Middle Ages.