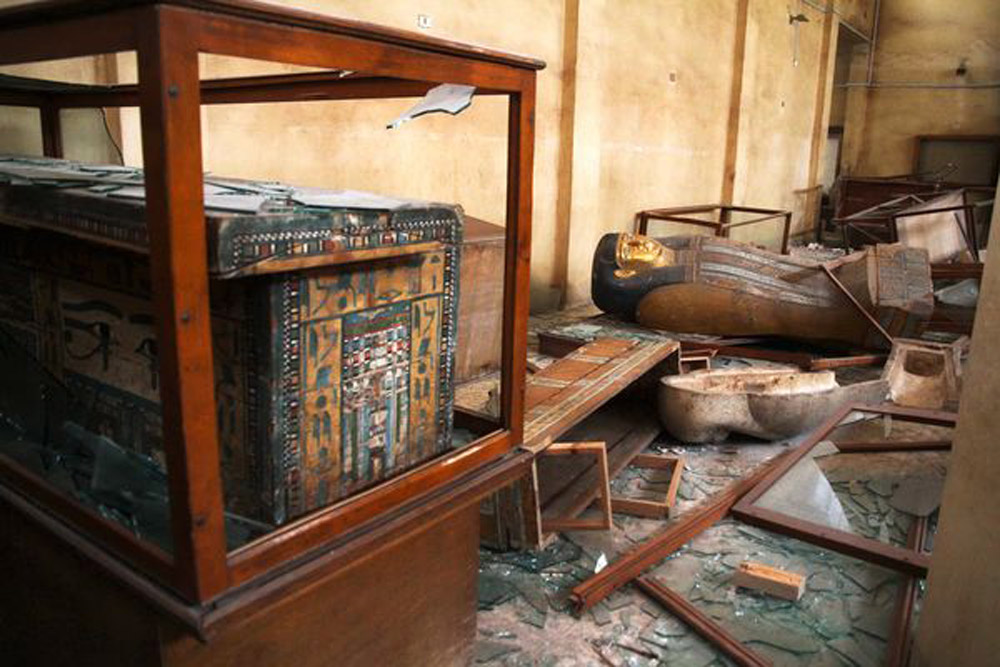 Some 16 objects reported missing from Malawi National Museum in Upper Egypt after it was looted 15 August have been recovered.

The museum was looted 15 August during deadly clashes that erupted across Egypt in the aftermath of the dispersal by police of two sit-ins held by supporters of ousted Islamist president Mohamed Morsi at Rabaa Al-Adawiya in Cairo’s Nasr City district and Al-Nahda Square in Giza.

On Saturday night, 24 August, five ancient Egyptian and Graeco-Roman artefacts were recovered by police. The objects include three Graeco-Roman reliefs made of marble and limestone. The first is broken into two parts and features a painting of a rabbit. The second has Graeco-Roman text while the third bears a deep engraving of two rabbits — the sign of Al-Minya in Graeco-Roman times.

The other two artefacts are carved in bronze, featuring Thot, the god of wisdom.

On Friday, 11 objects were recovered, among them two Graeco-Roman papyri in Demotic script (23 and 7 lines respectively) found by chance in a corner of the museum’s garden.

The rescued objects include three clay pots, a limestone statue of the god Thot in the shape of a sitting baboon, two bronze statues of the god Osiris and a rectangular relief bearing a drawing of an Ibis bird and the palm of goddess Maat.

Minister of State of Antiquities Mohamed Ibrahim is happy for the return of some of the museum’s collection, he told Ahram Online. The objects were restituted after the ministry promised Al-Minya inhabitants that no legal procedures would be taken against anyone returning a looted artefact.

Ibrahim asserted that security has been tightened at Al-Ashmounein archaeological site and galleries, to stop any illicit excavations there.