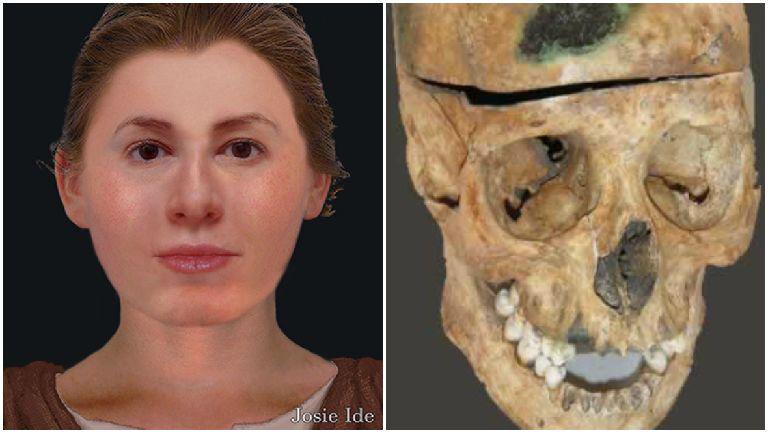 Shedding light on Edinburgh’s murky medical past, the face of an early autopsy patient has been unveiled for the first time.

Visitors to the City Art Centre’s new ‘Edinburgh Alphabet’(external link) exhibition, a major display spelling out an A-Z of the City’s Collections, will come face to face with an 18th Century resident under the letter O for ‘Old Town’.

The life-like reconstruction (pictured) is based on the skull of a skeleton unearthed in 1993. Identified by Council archaeologists as an Edinburgh woman in her mid-twenties to early-thirties, she was found within Lady Yester’s Church – now part of the University of Edinburgh’s Offices in Infirmary Street.

She was buried in a part of the church graveyard bought by the Old Royal Infirmary in 1749 to bury patients who were ‘unclaimed’ and her remains had undergone an autopsy.

Backing on to Surgeon’s Hall, the area lies 300 metres from the site of one of Edinburgh’s most notorious medical practitioners – Dr Knox. In findings reminiscent of the infamous physician, who traded with graverobbers Burke and Hare, the Council-found remains also bear evidence of ‘underground’ medical money-making.

Forensic analysis demonstrates that the subject’s front teeth were forcibly removed post-mortem. It is believed the teeth were stolen and sold to supply Scotland’s 18th Century industry for real ‘false’ teeth.

Her facial reconstruction, by Josie Ide from the University of Dundee, is based on modern forensic techniques and has been placed on display for the first time.

John Lawson, City of Edinburgh Council archaeologist, said: “In 18th Century Edinburgh, the Royal Infirmary became one of the UK’s most important hospitals. The city was quickly establishing a name for itself as a centre for medical excellence, and the findings of the hospital physicians significantly developed enlightened medical research.

“However, this quest to advance medical science had a well-known dark side. It could be difficult to trace a deceased patient’s relatives, and indeed many families were too poor to provide a proper burial. As the move towards graverobbing in the later 18th and early 19th Centuries tell us, such readily available bodies for research were in great demand. This led medics and hospital staff to meddle with Edinburgh’s criminal underworld.

“This woman’s teeth were almost certainly removed post-autopsy, most likely by one of the hospital porters. Help was possibly provided by one of the nurses or washerwomen charged with preparing the deceased for burial. These staff were poorly paid and corruption was commonplace. Such teeth, therefore, made a tempting and significant addition to a wage packet.”

Lynne Halfpenny, Director of Culture for the City of Edinburgh Council, added: “This is a wonderful opportunity to showcase Edinburgh’s history and collections in one, major display. Edinburgh Alphabet is a celebration of many decades of collecting, conserving and displaying artworks and artefacts with a connection to Edinburgh.

“We have chosen themes for each letter of the alphabet around which each exhibit can be grouped, allowing for a display of incredible variety and colour. The collection tells us so much about life in Edinburgh from the cradle to the grave.

“This exhibit reveals an early move towards criminal medical practice, with the subject’s teeth removed illicitly for money-making purposes. By putting a face to the finding, we hope to introduce visitors to this grisly but ultimately important part of the Old Town’s rich history.”

The facial reconstructions will be accompanied by artworks of the Old Town by Ned Holt, Walter Geikie and John Kay. The exhibition has been curated to highlight everyday objects, treasured items and unique paintings, drawings and sculpture from the collections of Edinburgh’s Museum and Gallery service.

The exhibition at the City of Edinburgh Council’s City Art Centre will run through October 8, 2017.

NOTES
1. The City of Edinburgh Council