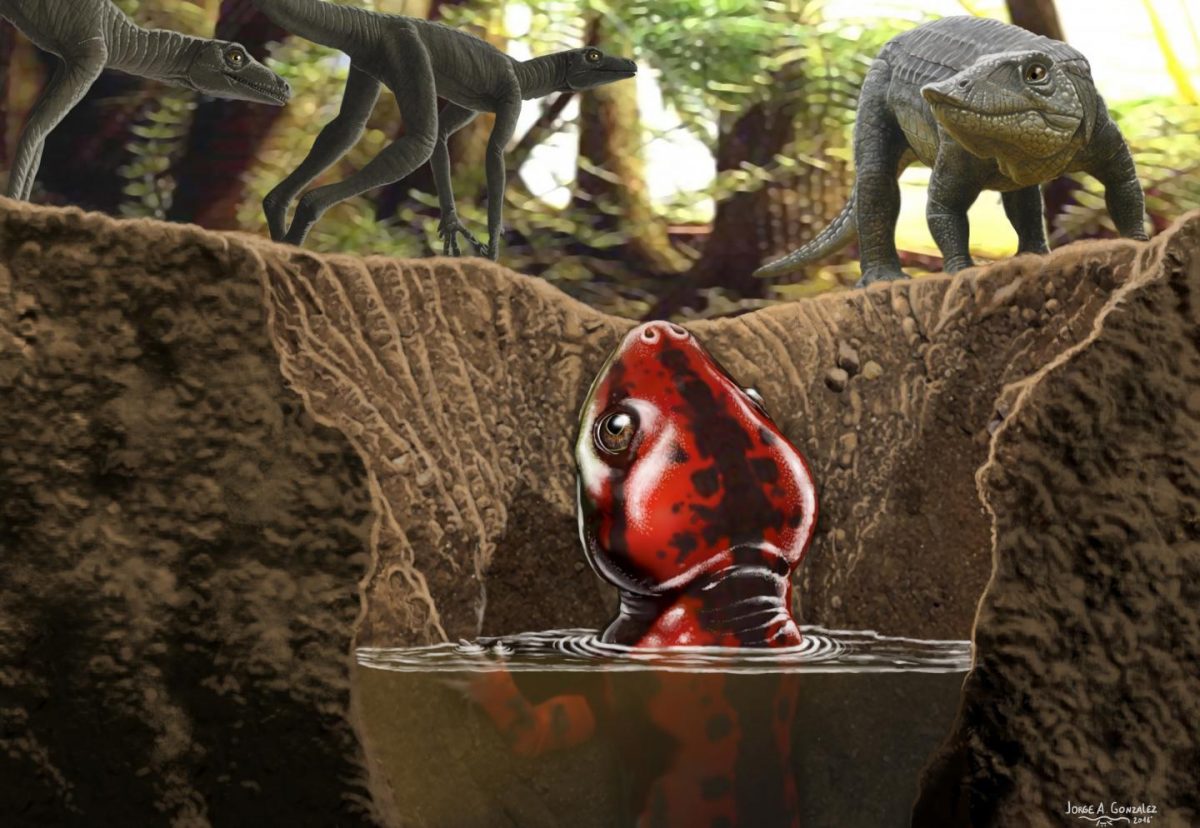 Tiny fossils reveal backstory of the most mysterious amphibian alive

Researchers have determined that the fossils of an extinct species from the Triassic Period are the long-missing link that connects Kermit the Frog’s amphibian brethren to wormlike creatures with a backbone and two rows of sharp teeth.

Named Chinlestegophis jenkinsi, the newfound fossil is the oldest relative of the most mysterious group of amphibians: caecilians. Today, these limbless, colorful serpentine carnivores live underground and range in size from 6 inches to 5 feet.

“Our textbook-changing discovery will require paleontologists to re-evaluate the timing of the origin of modern amphibian groups and how they evolved,” said Adam Huttenlocker, senior author of the study and an assistant professor in the Department of Integrative Anatomical Sciences at the Keck School of Medicine of USC.

The study, published in Proceedings of the National Academy of Sciences on June 19, expands the known history of frogs, toads and salamanders by at least 15 million years and closes a major gap in early caecilian evolution by connecting them to stereospondyls, animals with toilet-seat heads that were the most diverse amphibian group during the Triassic era more than 200 million years ago.

Scientists previously believed the story of the stereospondyl order was a dead-end because, although widespread during the Triassic Period, the animals were believed to be unrelated to anything alive today. The two recently discovered fossils dispel that theory and suggest that the amphibian lineage of today evolved from a common ancestor some 315 million years ago.

“Caecilians are hard to find in the fossil record because most are so small,” Huttenlocker said. “Chinlestegophis jenkinsi still preserves a lot of the primitive morphology that is shared with other Triassic amphibians, namely their four legs.”

Before C. jenkinsi, scientists had found only two other caecilian fossils from the Age of Dinosaurs and — unlike the two recently unearthed — those came later and had reduced limbs, more closely resembling their contemporary living relatives.

“It’s possible that the things that frog and salamander tissue can do when it comes to scarless healing are also present in human DNA but may be turned off,” said Jason Pardo, lead author of the study and a doctoral candidate in the Faculty of Veterinary Medicine at the University of Calgary in Alberta, Canada. “Because humans are also vertebrates, we enhance our understanding of our own evolutionary history and genetic heritage when we gain understanding of the amphibian lineage.”

There are currently fewer than 200 species of caecilians, which live in the wet, tropical regions of South America, Africa and Southeast Asia. But the two ancient fossil amphibians found in the late 1990s by Bryan Small, study co-author and a research associate at Texas Tech University, were preserved in the fossilized burrows of Eagle County, Colo.

The paleontologists used 3-D X-rays to reassemble the fossil remains of two C. jenkinsispecimens. Parts of a skull, spinal column, ribs, shoulder and legs survived in the fossils of the first specimen. Only the skull was distinguishable in the second specimen.

“Twenty to 30 years ago, we weren’t even sure of the origins of birds,” Pardo said. “Now we are solving some of the final remaining mysteries when it comes to what sorts of animals the major vertebrate groups evolved from. Caecilians, turtles and some fish are the only major vertebrate groups that paleontologists still have questions about.”

Characteristics of the ancient caecilian

The burrows these fossils were preserved in were almost 2 inches wide, meaning they could not have been very big. Their bullet-shaped skulls were just under 1 inch long, so the ancient caecilian was probably about the size of a small salamander, Huttenlocker said.

The length of the animal is unknown because researchers do not have the full fossil remains of the animal, but Pardo estimates that the ancient caecilian was between 6 inches to a foot long. As a small carnivore, it probably ate insects.

Its eyes would have been functional but tiny. Some of today’s caecilians do not have eyes or they are hidden under moist skin.

During the summer, this central Colorado area would have been scorching, which is probably why these subterranean animals thrived. Big dinosaurs like early relatives of the Tyrannosaurus rex and Triceratops could not have existed in such conditions, Huttenlocker said.

“The ancient caecilians lived in these burrows deep in the soil down to about the level of the water table so that they could keep wet and avoid the extreme aridity from the dry season,” Huttenlocker said. “I’m going back to Colorado this summer and hope to find more animals with more complete skeletons. We’ll find one. This is just the initial report.”