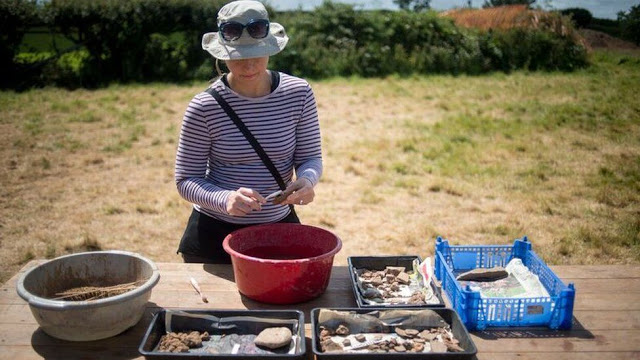 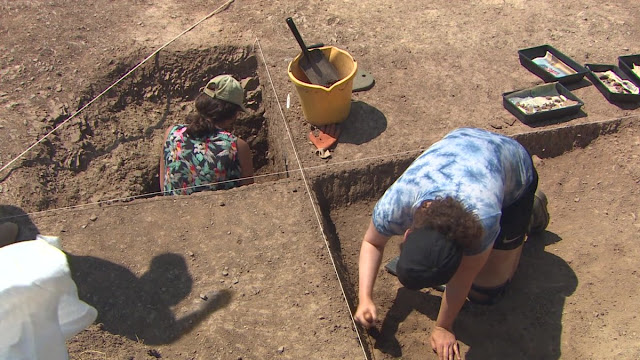 Ancient Devon community had a taste for exotic food and drink

A thriving settlement in Ipplepen

Devon farmers who made their home in the same remote location for 1,200 years had a taste for exotic imported food and drink, archaeologists have found.

There was a thriving settlement in Ipplepen, South Devon, for hundreds of years longer than previously thought, excavations have shown.

It was originally thought that people only lived on the site during the Roman period, but radiocarbon analysis now shows the settlement was founded in the middle of the pre-Roman Iron Age — the 4th century BC. It was only finally abandoned in the 8th century AD, possibly because of the foundation of Ipplepen village nearby.

The radiocarbon analysis was of burials and charcoal found by University of Exeter archaeologists in 2015-16. They have been excavating different parts of the area during the past few years and have been digging again this month.

In previous years the excavations have revealed where people lived, and where they buried their dead, but excavations this year have given clues as to how they were making a living. The remains of a granary suggests it may have been used to store grain produced though farming the surrounding fields, while debris from iron working shows that there was also industrial production.

Roman pottery, some if it imported from France and the Mediterranean, shows this was a community with a taste for exotic food and drink.

Professor Stephen Rippon of the University of Exeter said: “When we started excavating we thought that the site was only used during the Roman period, but the appliance of science has shown that it was occupied for well over a thousand years. Our excavations have given us further insight into how people made a living too.

“It is wonderful that the local community are able to share in the excitement of what we are finding and Heritage Lottery Funding for their training has made this possible.”

The public visited the site on Sunday 25 June when there were guided tours and visitors had the opportunity to see the latest finds. They also had the chance to learn about Roman coins with leading coin expert Dr Sam Moorhead from the British Museum.

Devon archaeologist Danielle Wootton, who is working at the site, said “Last year, we welcomed 1,200 visitors in just six hours and it was great to see the public so interested in this important archaeological site on their doorstep. We look forward to welcoming everyone again this year.”

Dr Chris Smart of the University of Exeter said: “We are so excited to be able to show everyone the hidden past of Ipplepen. The generosity of the Heritage Lottery Fund will enable us to help the community to record some of the most important archaeological and historic sites within the region and this will be of huge benefit to future generations.”

The Ipplepen Archaeological Project team have also undertaken a series of workshops in local schools. Before the excavation began this year, Danielle Wootton and Chris Smart visited several schools including Ipplepen Primary School, Abbotskerswell Primary School, and Sands Secondary School in Ashburton, to talk about the history of the site and what has been found there. Groups from all the schools are now visiting the site to work with archaeologists, students and volunteers. This has so far included building a roundhouse wall, designing a Roman coin, and learning to identify different types of pottery.