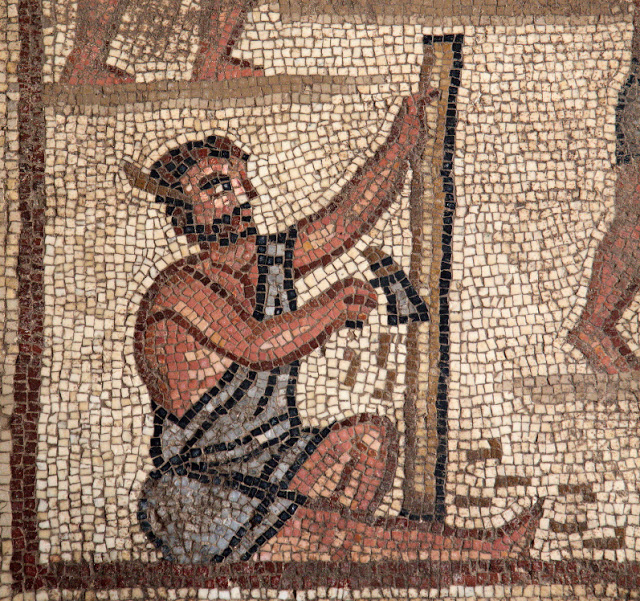 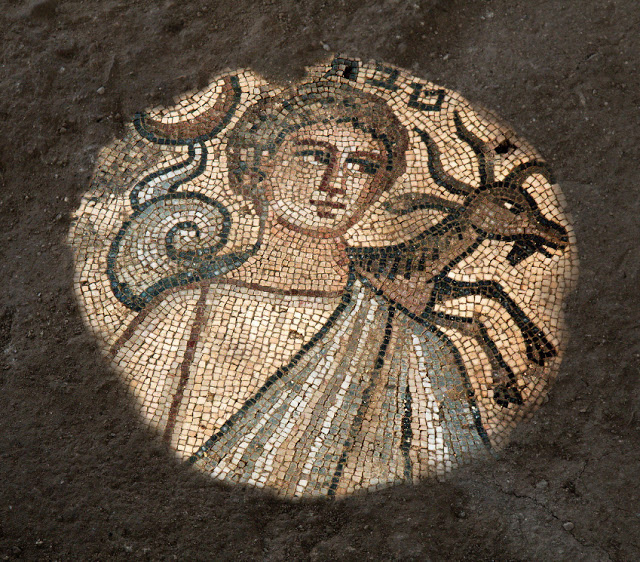 Mosaics were first discovered at the site in 2012, and work has continued each summer since then. In 2012, a mosaic depicting Samson and the foxes (as related in the Bible’s Judges 15:4) was found in the synagogue’s east aisle. The next summer, an adjacent mosaic was uncovered that shows Samson carrying the gate of Gaza on his shoulders (Judges 16:3). Another mosaic discovered in the synagogue’s east aisle in 2013 and 2014 depicts the first non-biblical story ever found decorating an ancient synagogue — perhaps the legendary meeting between Alexander the Great and the Jewish high priest.

A mosaic panel uncovered in 2015 next to this scene contains a Hebrew inscription surrounded by human figures, animals and mythological creatures including putti (cupids). Mosaics discovered in the northern part of the nave (main hall) in 2016 portray two biblical stories: Noah’s Ark and the parting of the Red Sea, in which Pharaoh’s soldiers are swallowed by large fish similar to the fish swallowing Jonah in the mosaic uncovered this summer.

“One of the distinguishing features of the Huqoq mosaics is the incorporation of numerous classical (Greco-Roman) elements such as putti, winged personifications of the seasons, and — in the Jonah scene — harpies (large birds with female heads and torsos representing storm winds),” said Magness. “The mosaics also provide a great deal of information about ancient daily life, such as the construction techniques shown in the Tower of Babel scene uncovered this summer.”

Sponsors of the project are UNC-Chapel Hill, Baylor University, Brigham Young University and the University of Toronto. Students and staff from Carolina and the consortium schools participated in the dig. Financial support for the 2017 season was also provided by the National Geographic Society, the Loeb Classical Library Foundation, the International Catacomb Society and the Carolina Center for Jewish Studies at UNC-Chapel Hill.

The mosaics have been removed from the site for conservation, and the excavated areas have been backfilled. Excavations are scheduled to continue in summer 2018. For additional information and updates, visit the project’s website: www.huqoq.org.

NOTES
1. The University of North Carolina at Chapel Hill