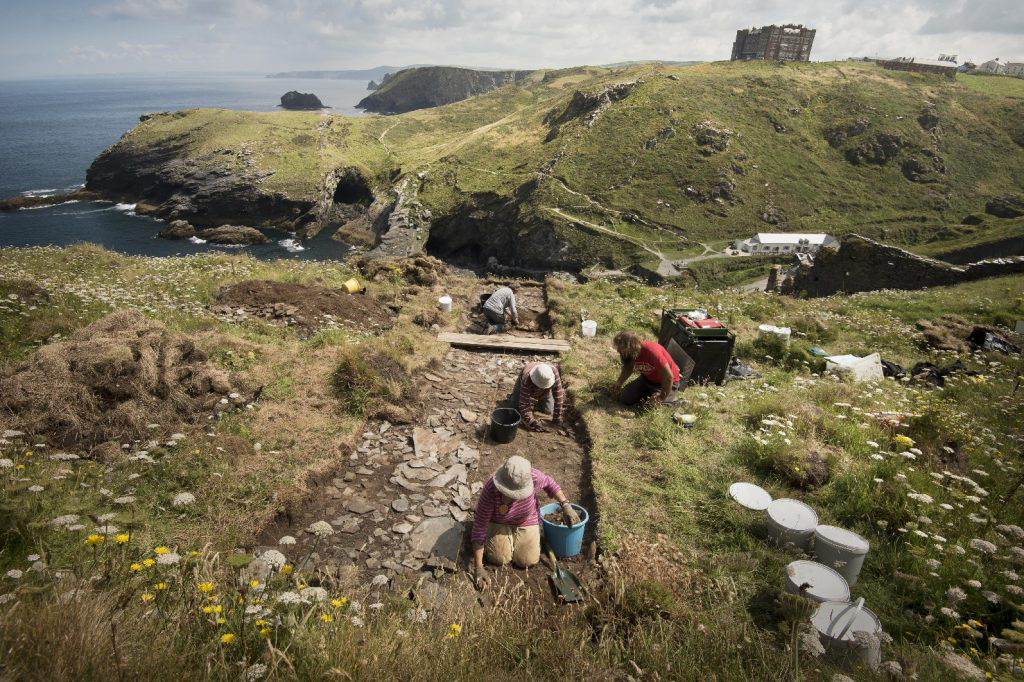 A feast of finds from Cornwall’s First Golden Age

Excavations at Tintagel Castle have revealed that the early Cornish kings feasted on a diet of oysters, roast pork and fine wine, dining and drinking from bowls imported from Turkey and glass goblets from Spain, English Heritage announced today (13 July 2017) as archaeologists return to the legendary castle to continue their investigations.

The ground-breaking 2016 dig by the Cornwall Archaeological Unit (CAU) – the first research excavations at Tintagel Castle in decades – covered only a small area, but still unearthed a feast of historical finds. The fascinating finds from the late 5th and early 6th centuries include fine tableware from as far away as Turkey, decorated Spanish glassware and evidence that those at Tintagel Castle were feasting on pork, fish and oysters during the centuries that have been called “Cornwall’s First Golden Age”. During this period, Tintagel was almost certainly a royal site with trading links reaching from the Celtic Sea to the eastern Mediterranean.

The excavation also uncovered a selection of stone-walled structures on the southern terrace of Tintagel Castle’s island area, with substantial stone walls and slate floors, accessed by a flight of slate steps. Significant finds in the area excavated included a section of a fine Phocaean Red Slipped Ware bowl from Turkey, imported wares and amphorae thought to be from southern Turkey or Cyprus and fine glassware from Spain.

Archaeologists also found evidence which suggests that those living at Tintagel at the time were enjoying a rich diet, as shown by pig, cow and sheep or goat bones with signs of burning and butchering, oyster shells and a cod cranial bone, the first evidence of deep sea fishing at Tintagel.

Following on from these successful excavations, the archaeologists have this week (w/c 10 July) returned to Tintagel Castle to carry out more fieldwork, examining a much wider area. They will be on-site until 11 August during which time the public will be able to see them in action.

English Heritage’s Properties Curator, Win Scutt said: “These finds reveal a fascinating insight into the lives of those at Tintagel Castle more than 1,000 years ago. It is easy to assume that the fall of the Roman Empire threw Britain into obscurity, but here on this dramatic Cornish cliff top they built substantial stone buildings, used fine table wares from Turkey, drank from decorated Spanish glassware and feasted on pork, fish and oysters.

“They were clearly making use of products like wine and oil contained in amphorae traded from the eastern Mediterranean. It’s a highly evocative picture and I am delighted that the time has come to return to site with the team to find out more.”

Jacky Nowakowski, project director at CAU said: “Our excavations at Tintagel last summer exceeded all expectations by partially revealing amazingly well-preserved stone walls, a slate floor and a flight of steps which belong to a pair of well-built buildings. Accompanied by many finds, we have at present, a broad date range which suggests these buildings were part of the major post-Roman settlement at Tintagel.

“Our plan in 2017 is to open up a much larger area on the southern terrace so that we get a good look at the scale and size of the buildings and find out exactly when they were built and how they were used. All indications to date could suggest that they are residential buildings perhaps lived in by important members of the community which lived and traded at Tintagel over 800 years ago. Visitors and those following the project online will be able to see the excavations in action and hear about new discoveries day by day and to share in the excitement of this new research”

A selection of extremely interesting iron artefacts was also uncovered, including items of personal wear, domestic items and possible hunting paraphernalia. These objects from the late Roman and post-Roman periods will greatly extend the knowledge of domestic life at this time, not just at Tintagel, but in the whole of Britain.

The archaeology project first hit the headlines last summer when some substantial walls were discovered in exploratory trenches dug on the southern and eastern terraces behind the castle’s island ward. Now a new report from the Cornwall Archaeology Unit describes all these discoveries in more detail, along with preliminary results from the scientists and archaeologists who have been working on the finds and samples over the last few months.

Following on from these successful excavations at Tintagel Castle in north Cornwall in 2016, a team from Cornwall Archaeological Unit have now returned to the castle to carry out more fieldwork. The 2017 dig at Tintagel Castle runs for five weeks from 10 July to 11 August 2017, six days a week (excluding Saturdays). A wide outreach programme will take place, including a five day Archaeology Festival from 24 – 28 July and visits from education groups.

The Tintagel Castle Archaeological Research Project is funded by English Heritage and runs for five years, with archaeological excavations in 2016 and 2017. A fully illustrated digital report on the results of the project is planned for 2021.

Significant finds include a section of a fine Phocaean Red Slipped Ware bowl from Turkey, imported wares and amphorae thought to be from southern Turkey or Cyprus and fine glassware from Spain. Other items from Spain or North Africa were also found, alongside pieces of hard granular grey ‘E-ware’ jars, bowls and jugs probably from western or central France. These pieces of ‘E-ware’ add another dimension to current understanding of the chronology of Tintagel Castle, potentially suggesting people continues to live on the site into the later sixth or even seventh century AD.

The report chronicles an intriguing selection of stone-walled structures on the southern terrace of Tintagel’s island ward, with substantial stone walls and slate floors, accessed by a flight of slate steps. This summer, the archaeologists will return to this area to examine the buildings in more depth, attempting to discover when they were built, what they were used for and when they were abandoned.

The finds of rich tableware suggest fine dining, wealth and consumption, and are coupled with finds of food in the associated rubbish dump including:

-A cod cranial bone, the first evidence of deep sea fishing at Tintagel.
-Animal bone fragments, including a pig jaw, teeth and limb bones from cattle, sheep/goat and pig, some with signs of burning and butchering.
-Oyster shells, suggesting these were being eaten at Tintagel.
-Finding animal bones in Cornwall is unusual, as the acidic soils usually mean that bones don’t survive.

A significant collection of post-Roman glass was also identified, including finely decorated pieces of glass vessels from north-eastern Spain. Other glass fragments provide possible evidence for an extended chronology and these cover the range of imported forms which date from 5th- to 7th-centuries AD.

A selection of iron artefacts found was described as ‘extremely interesting’, including:

The report outlines the archaeologists’ belief that these iron objects from Tintagel in the late Roman and post-Roman periods will greatly extend the knowledge of domestic life at this time, not just on this site, but in the whole of Britain.