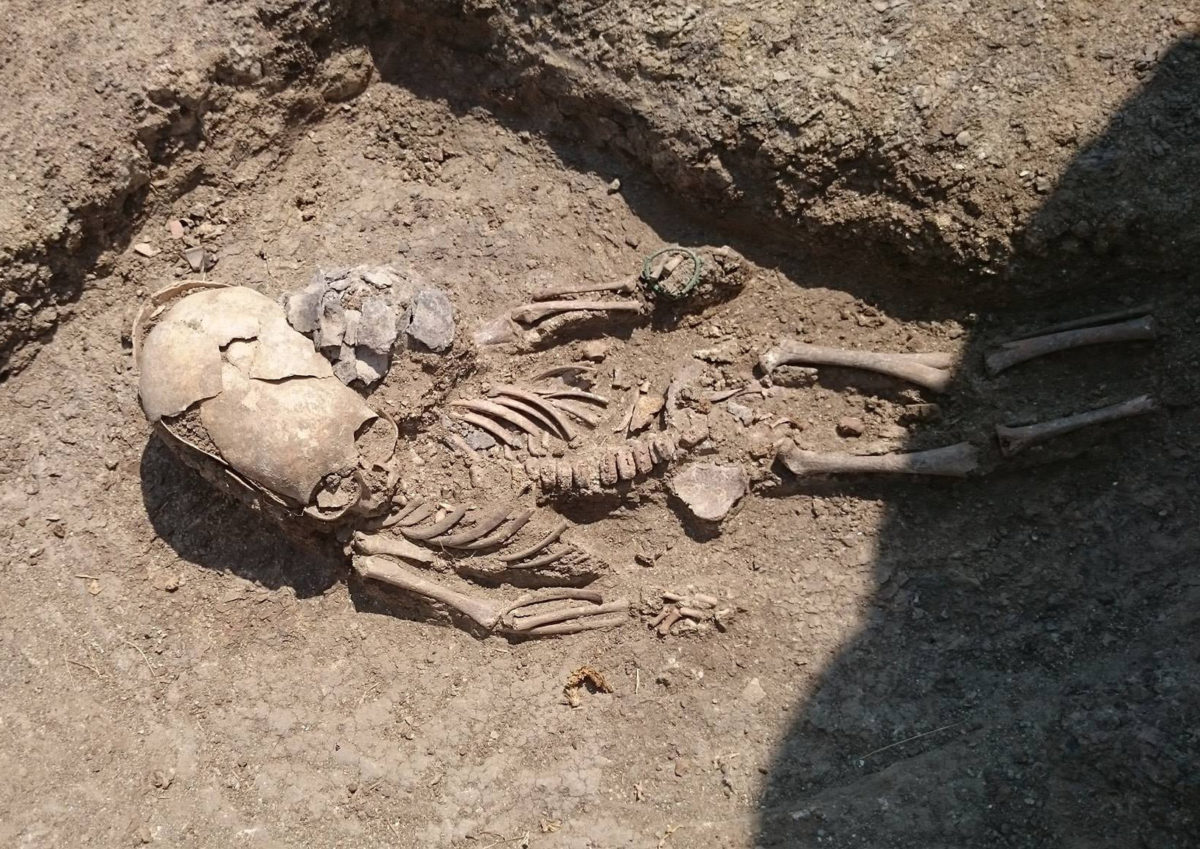 No alien in the ‘grave of an alien’

A case of cranial deformation

Archaeologists excavating at the ancient necropolis of Kyz-Aul of east Crimea have unearthed a child burial with an intentional cranial deformation, they dubbed “the grave of an alien.”

During the excavations, conducted by the Institute of Archaeology of the Russian Academy of Sciences and the Archaeology Foundation, several graves of Sarmatian soldiers and horse burials came to light, dating from the 1st c. BC to the 3rd c. AD.

Osteological analysis has showed that the “alien” skeletal remains belonged to a boy, that was c. 18 months at the time of his death. The burial dates back to the 2nd c. AD. At the time Crimea was part of the Hellenistic Bosporan Kingdom, which then became a client state of the Roman Empire.

The skeletal remains are excellently preserved. Near the head of the child a clay vessel and some colored glass beads were found. A copper alloy bracelet was found on the boy’s right wrist. No remains of a coffin or a gravestone were found, thus the child must have been buried directly in the ground.

“It can be possible that the boy was to become a warrior, an equestrian cataphract, a defender of the Bosporan Kingdom,” the press report of the Archaeology Foundation said.

Cranial deformation was first discovered in 1826 by Paul de Brux, found of the Bosporan archaeology, in the necropolises of Bosporus Cimmeria, in the Kerch region. According to an article published in Neurosurgical Focus (vol. 36, No 4, April 2014) “From an anthropological point of view, artificial deformation of the cranial shape in newborns is one of the most interesting human customs, which has been recorded in all continents and in different cultures. However, the main goals of this procedure were basically the same everywhere; that is, to distinguish certain groups of people from others and to indicate the social status of individuals.”

Apart from that, some researchers believe that the aim of cranial deformation was to increase aggressivity. The practice is a common trait found among remains belonging to Sarmatians, who once inhabited Crimea. They would bind wooden planks to infant skulls with a cloth to gradually alter the shape. “Such deformations were seen as altering the character, and making the warriors ‘more aggressive’,” reports The Daily Mail . “The high amount of offensive weapons found in Sarmatian graves indicates they lived a military-oriented nomadic life.”

In the 2nd c. AD the ruling Greek dynasties were replaced by a Sarmatian one. Also in 175 AD the Sarmatians negotiated a treaty with Marcus Aurelius, by the terms of which 8,000 of the famed Sarmatian cavalry were to be sent to Rome.