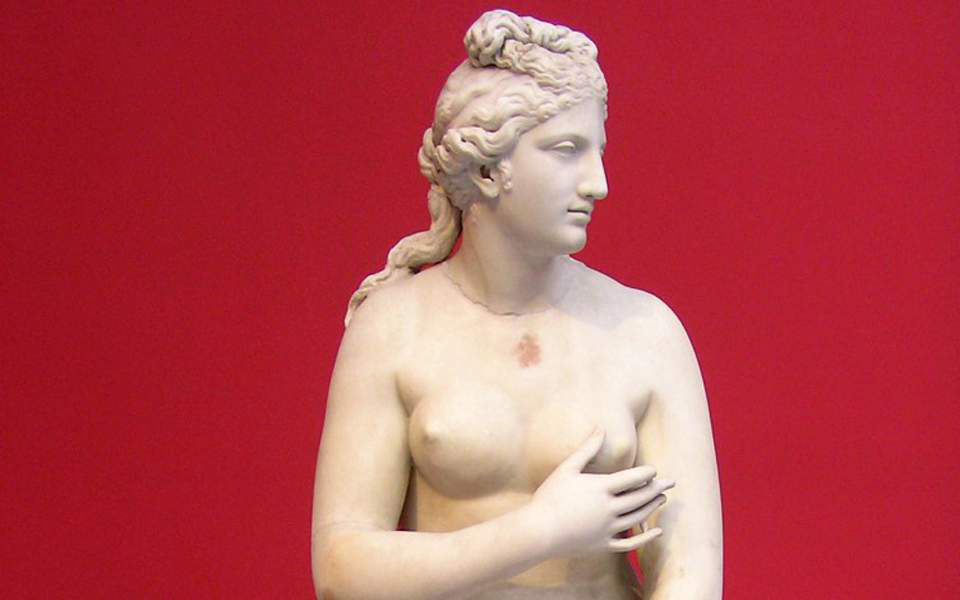 Aesthetics and… women’s curves in antiquity

If today the dictatorship of fashion insists on thin women, once upon a time it was plump women who represented beauty. In Neolithic times for example marble female statuettes featured strongly curved breasts and hips.“Full” women were a symbol of “prosperity” at a time when humans’ main activity was the quest for food. Curves were also accentuated in Cycladic figurines known as “violin shaped”. At the height of early Cycladic culture, the female form is depicted standing with hands folded below the breasts, the head tilted slightly backwards and the soles of the feet giving the impression that the figure is on tip toe. Of course, starting from Archaic times, symmetry in proportions is aimed at more often.

All this, as well as many secrets on beauty, is revealed in the new exhibition entitled “Countless aspects of beauty in ancient art” being prepared by the National Archaeological Museum of Athens for the following spring, researching and recording different expressions of aesthetics in socially and culturally heterogeneous environments. The public will have the opportunity to see how beauty has transformed itself over the centuries, through 230 exhibits, mainly from the Neolithic period, Cycladic and Mycenaean cultures and Historical times, comprising figurines, jewelry, vases, Aphrodites and cupids, cosmetic objects etc., many of which are coming out of the store rooms for the first time.

Upon becoming the new director of the National Archaeological Museum, Maria Lagogianni planned a trilogy of exhibitions that began with “A dream among splendid ruins… Strolling through the Athens of travelers, 17th-19th century”, showing the public the cultural climate in which the National Archaeological Museum was created, as were all the big museums of Europe. She continued with “Odysseys”—a big challenge for the NAM, on the occasion of the 150 years of the museum’s foundation in 1866—a successful exhibition requested to be extended till March 2018. Now she is preparing the “Countless aspects of beauty in ancient art”.

As the director of the institution says to the “Kathimerini”, it is stated in the statutes of the museum, founded by Presidential Decree in 1893, that its purpose is “archaeological research and science, but also the development of a love of the fine arts”. In the new exhibition, Mrs Lagogianni  explains: “We praise the most spiritual of human creations; beauty and its aesthetic depiction in ancient art.” The catalogue alone includes 26 contributions on the origins of aesthetics in the Paleolithic and Neolithic ages, the Early-Cycladic civilization, the Mycenaean ideal up to Historical times.

“Beauty is the most spiritual expression of humankind,” says Mrs. Lagogianni. As for the visitors, they will see a variety of exhibits; creations of practical significance, but also others that fulfill essential spiritual needs.

The exhibition will be showing different expressions of aesthetics in heterogeneous environments. The way the human form appears in Neolithic culture but also its evolution in Cycladic and Mycenaean society, as in historical times. “We have an evolution emerging through art. Ideals are one thing and the function of society another”. When observing the Neolithic figurines in the collections of the National Archaeological Museum, the visitor notices the differences in the depiction of the human form. In a society where finding food is a challenge, the female forms are well built. “They are symbols and not a figurative rendering of form” explains the museum’s director, urging us to look closely at the women in Mycenaean societies as depicted in the frescoes of the time. They really are presented with a huge bust, “a symbolic way of rendering form”, as she notes. “Later, there is a different development brought about by Greek culture when the human being acquires self consciousness. Classical art is a big break in the history of art; self-consciousness, the feeling that I am, I exist and I am expressing myself. In Hellenistic times, we leave behind the blessed serenity of classical art. It is a period that has much in common with our times. In the works you can distinguish anxiety and realism in the faces of people, a questioning and fear.”

The visitor will see the differences through the naked body but also through clothing. “For a start, we will show the imprint of beauty in man’s material creations. How man imagined himself as well as whatever he used, in all cultures, to appear beautiful. Don’t also forget that Aphrodite, the most beautiful of women according to mythology, was born naked, but the moment she came out of the sea, she was dressed, perfumed, adorned with jewellery and led to mount Olympus.”

We learn a lot from mythology. It was in antiquity, for example, that the first beauty contests took place with Zeus as their organizer. It came about when he wished to honour the wedding of Peleus and Thetis that he, Zeus, organized a reception on mount Olympus, but avoided inviting the goddess of discord. She promptly took revenge by throwing a golden apple in the midst of the reception, inscribed “for the most beautiful”. So Hera, Athena and Aphrodite came to blows over who was entitled to the prize. Unable to decide, Zeus appointed Paris, a mortal, as judge. Each of the goddesses tried to bribe him; Hera by offering political power and wealth, Athena offering skill in battle and wisdom and Aphrodite the most beautiful woman on earth.

The goddess of beauty also had a secret; a source of erotic power that aimed at desire and allure: The secret was the kestos, an embroidered girdle she tied under her bust. It was antiquity’s wonderbra. According to Homer, this is what Hera asked Aphrodite to give her at a difficult moment when she wanted to win back Zeus who, as we know, often went astray. Faced with her husband’s new infidelity, Hera asked Aphrodite to give her secret weapon to her. Of course, Aphrodite also had weapons of revenge. When she could not tolerate a woman, she cursed her by making her smell bad. She punished the women of Limnos by making them stink, because they neglected to honour her.

We shall learn about many such stories in the new narrative prepared by the country’s top museum; even the secrets of perfumers of the time based on Linear B tablets. We will also smell perfumes made from ancient recipes. Mrs Lagogianni tells us that one of three perfumes being prepared by the Korres company is an ancient one and she reveals only that “its first note is sweet and of a red hue, then it becomes cool and green”. The rest is left to our imagination…