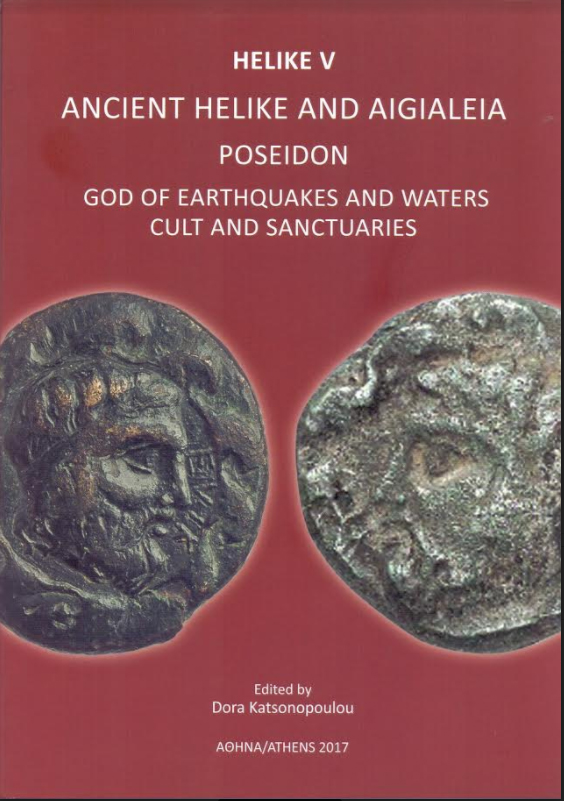 The new volume Helike V is just published by the Helike Society, edited by the Society President Prof. Dora Katsonopoulou. The volume is the fifth in the series of Proceedings of International Conferences on Ancient Helike and Aigialeia, organized by the Helike Society and held in the region of Aigialeia about every five years. In the new volume, under the specific title POSEIDON, God of Earthquakes and Waters. Cult and Sanctuaries are included 16 scholarly papers presented during the Fifth International Conference on Ancient Helike and Aigialeia, which took place in Aigion from 4-6 October, 2013. Main purpose of the Conference was to present (a) the most recent data on Poseidon’s cult in the Helike region and other areas of the Peloponnese, and Ionia in Asia Minor where the god was strongly worshipped as Helikonios and (b) seismic phenomena, and especially the 373 BC earthquake in connection with Poseidon’s primordial capacity as god of earthquakes and waters.

The 16 papers of the volume are divided into two parts. Part I, entitled Cult and Sanctuaries of Poseidon, includes nine studies on Poseidon’s cult in Helike and other areas of the Peloponnese, also in Ionia of Asia Minor. Part II, entitled Poseidon and Earthquakes: Helike and the Gulf of Corinth, contains seven papers on the area of Ancient Helike and the seismic history of the Gulf of Corinth, focusing on the remarkable 373 BC earthquake and its impact.

Part I begins with the presentation of new elements about the cult of Poseidon Helikonios in Helike based on available literary evidence and the new archaeological data from excavation work of the Helike Project in the area (Dora Katsonopoulou). Next, the metrological and iconographic contexts of all the known Helike coins are for the first time examined and it is concluded that they were part of a small, one-time issue sometime around 300 BC (Robert Weir). The next three articles of the volume by Hans Lohmann, Hans Lohmann and Özge Özgul,  and Frank Hulek about Panionion, the central sanctuary of the Ionian League in Asia Minor, where Poseidon was worshipped as Helikonios, present the latest evidence on its location from archaeological excavations and geoarchaeological research conducted at Mt. Çatallar Tepe in the Mykale region. The meaning of the Homeric epithets and titles of Poseidon enossigaios, enosichthon, and gaieochos is explored next by IoannisPetropoulos, and Poseidon’s special connection with the Peloponnese and his cult in the early historic times is analysed by Ελένη Μαράντου. The beginning and the development of Poseidon’s cult in Troezenia are presented in detail in the following study by Eleni Konsolaki Yannopoulou, and the sanctuary of Poseidon Gaieochos in Mikri Dragonara of the island of Kythera is next described by Άρης Τσαραβόπουλος and Γκέλη Φράγκου.

Part II begins with the presentation of the results of geophysical prospection at the Mycenaean cemetery in the area of Ancient Helike (Grigoris Tsokas et al.) and of petrographic and geochemical analyses of pottery from the Early Helladic Helike settlement (Ioannis Iliopoulos and Vayia Xanthopoulou). A different approach is next presented regarding the possible causes of Helike’s natural destruction in 373 BC in conjunction with terrestrial flooding as a medium of catastrophe (Nikolaos Kontopoulos, Dora Katsonopoulou and Asimakis Koutsios) while similar conclusions are reached via the geological study of the area by Κωνσταντίνος Τρίκολας. The 373 BC catastrophe and its impact at the site of Delphi are investigated next via a new ‘reading’ of the architecture of the sanctuary as a whole by Elena Partida. The last papers of the volume refer to the eastern part of the Gulf of Corinth. Initially, the palaeoseismological history of the Kenchreai Fault in Korinthia is re-considered by Ioannis Koukouvelas and Elena Korka, and next, the geological history of the ports of Lechaion and Kenchreai after the late Roman period is presented by Νίκος Μουρτζάς and Ελένη Κολαΐτη.

The volume Helike V can be purchased in the bookstore “ANDROMEDA BOOKS” in Athens.  Email: [email protected]; www.andromedabooks.gr