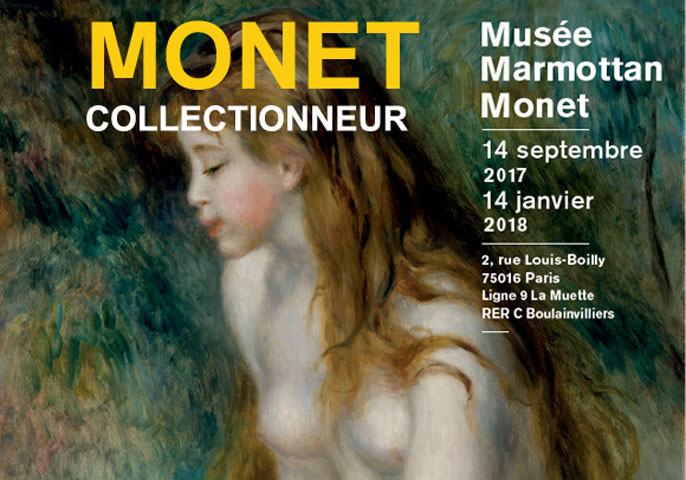 Monet’s secret collection is displayed at the Marmottan Museum

Renoir, Cezanne, Boudin, Caillebotte; Monet was a secret and compulsive collector of works that were often far removed from his own painting, as shown by the exhibition – a product of four years detailed research – opened recently at the Marmottan Museum in Paris and on till January 14, 2018.

“I am an egotist. My collection is only for myself … and a few friends” stated Claude Monet (1840-1926), around 1900, to journalists who visited him at his home in Giverny in the region of Normandy. Some of them had the privilege of discovering the works collected by the painter who sometimes narrated the conditions under which he had acquired them.

Despite these testimonies “very little is known about this collection”, underlines Marianne Mathieu, curator of the exhibition with Dominique Lobstein. When Monet died in 1926, an inventory was compiled by experts working with the art dealer Bernheim, but this document was destroyed during the Second World War.

“So we had to start from square one”, explain the two art historians. Regarding the collection, the two of them resorted to all possible sources of documentation: catalogues, sales notes, correspondence, inventories, stock books from various galleries…

‟We compiled a first list that we passed through X rays, until we ended up with a total of almost 120 works”, states Marianne Mathieu, ‟ detailed work that also allowed us to construct a parallel chronology of the collection and life of Monet.”

At the beginning of his career, Monet had no money to buy works, but accepted paintings of fellow artists. He was reluctant to become the subject of a painting with his wife Camille. The only artist who finally made the couple’s portrait was Eduard Manet. This painting appears to be incomplete, with only a sketch of Monet’s face, but which the latter, however, would keep all his life.

The period of gifts was followed by that of exchanges. In 1884, as a close friend of Berthe Morisot, Monet offered her a wonderful Italian landscape, the painting “Les villas à Bordighera”, for the house she had just built. After Morisot’s death in 1895, to satisfy her mother’s wish, her daughter Julie Manet suggested to Monet that he choose one painting out of the 300 of a retrospective exhibition. He took the painting “Julie Manet et sa levrette Laerte”.

With Pissarro, the situation was more strained. Monet lent 15.000 francs to the couple for them to buy a house in Eragny. In return, however, he claimed the painting “Paysannes plantant des rames”, which was particularly appreciated by critics of the period. The only problem was that Pissarro had already given the painting to his wife Julie, who categorically refused to part with it. The impressionist painter insisted and was finally vindicated.

One is even more impressed by this persistence since the painting in question is a work of Neo Impressionism, a movement with which Monet had refused to exhibit his works. “This is an example of inconsistency between his statements and the works he collected” observes Mathieu.

Monet’s first love for Cezanne was the work “The Negro Scipio” (1865), which is on loan especially for this exhibition from the Sao Paolo Museum of Art.