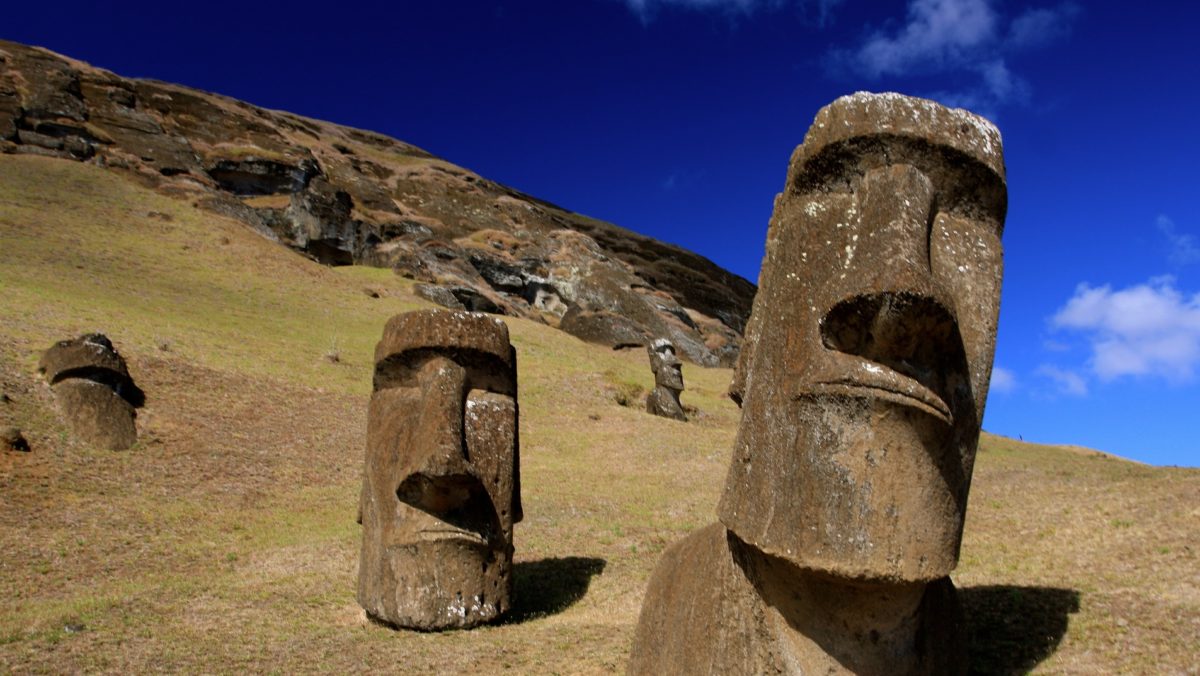 New study, published in the open-access journal Frontiers in Ecology and Evolution,

Easter Island, known as Rapa Nui by its inhabitants, has been surrounded in mystery ever since the Europeans first landed in 1722.

Early visitors estimated a population of just 1,500-3,000, which seemed at odds with the nearly nine hundred giant statues dotted around the Island. How did this small community construct, transport and erect these large rock figures?

A new study, published in the open-access journal Frontiers in Ecology and Evolution, hopes to unravel this mystery by giving the best estimate yet of the maximum population size sustained by Easter Island in its heyday.

“Despite its almost complete isolation, the inhabitants of Easter Island created a complicated social structure and these amazing works of art before a dramatic change occurred,” says Dr. Cedric Puleston, lead author of this study, based at the Department of Anthropology, University of California, Davis, USA. “We’ve tried to solve one piece of the puzzle – to figure out the maximum population size before it fell.

It appears the island could have supported 17,500 people at its peak, which represents the upper end of the range of previous estimates.”

He adds, “If the population fell from 17,500 to the small number that missionaries counted many years after European contact, it presents a very different picture from the maximum population of 3,000 or less that some have suggested.”

Previous archaeological evidence implies the indigenous people numbered far greater than the 1,500-3,000 individuals encountered in the 18th century. The population history of the island remains highly controversial. In addition to internal conflict, the population crash has been attributed to “ecocide,” in which the Island’s resources were exhausted by its inhabitants, reducing its ability to support human life.

Puleston and his colleagues examined the agricultural potential of the Island before these events occurred, to calculate how many people the Island could sustain.

“The project, funded by the U.S. National Science Foundation, involved a number of really good researchers, including archaeologists, a local expert in Rapa Nui culture, a soil scientist, a biogeochemist, and a population biologist, to get a thorough picture of what the island was like before European contact,” he explains.

“We examined detailed maps, took soil samples around the Island, placed weather stations, used population models and estimated sweet potato production. When we had doubts about one of these factors we looked at the range of its potential values to work out different scenarios.”

They found 19% of the Island could have been used to grow sweet potatoes, which was the main food crop. By using information on how birth and death rates at various ages depend on food availability, the researchers calculated the population size that level of production could sustain.

“The result is a wide range of possible maximum population sizes, but to get the smallest values you have to assume the worst of everything,” says Puleston. “If we compare our agriculture estimates with other Polynesian Islands, a population of 17,500 people on this size of island is entirely reasonable.”

He concludes, “Easter Island is fascinating because it represents an extreme example of a natural experiment in human adaptation, which began when people from a single cultural group spread quickly across the islands of the Pacific. The different environments they encountered on these islands generated a tremendous amount of variation in human behavior. As an extremely unusual case, in both its cultural achievements and its ecological transformation, Easter Island is remarkable and important. It retains an air of mystery, but it’s a real place and has a real history lived by real people. Dispelling that mystery brings us closer to understanding the nature of humanity.”