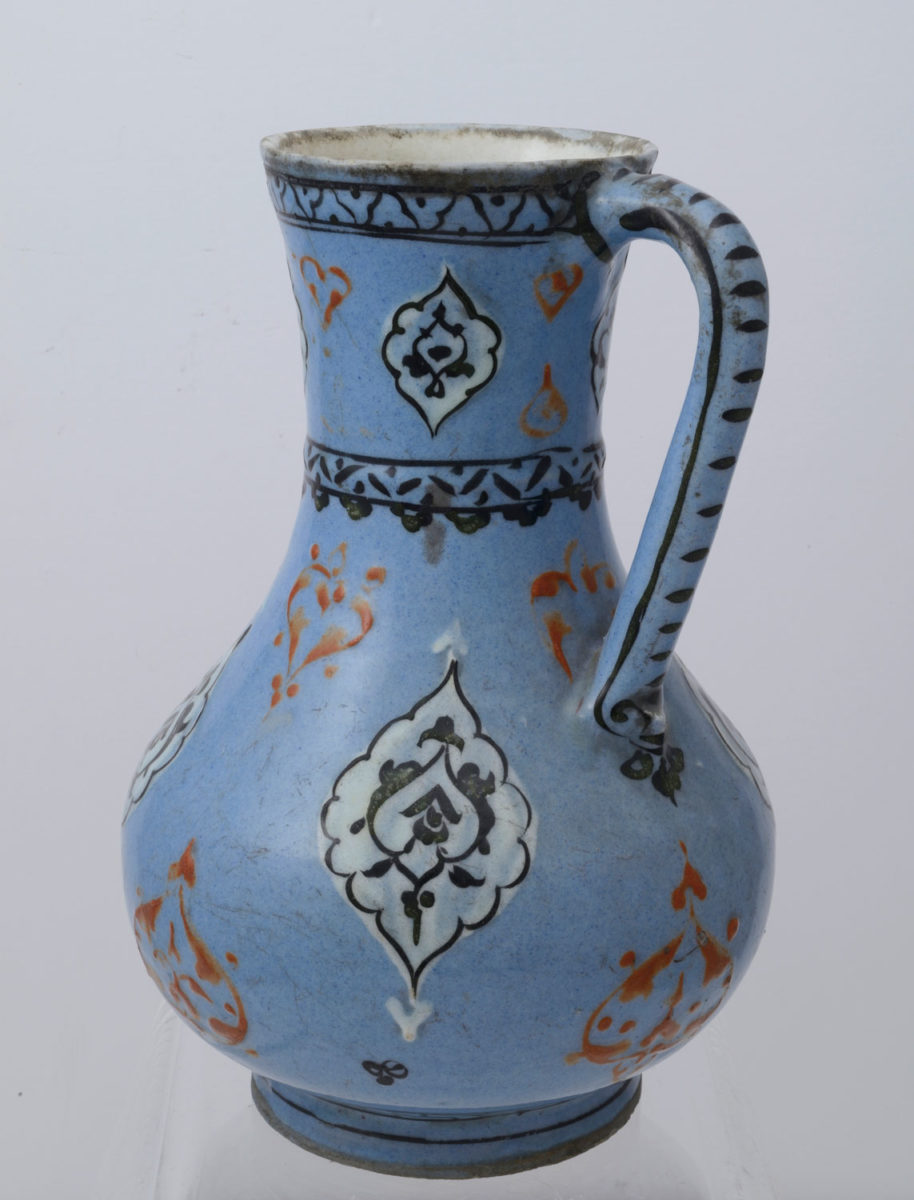 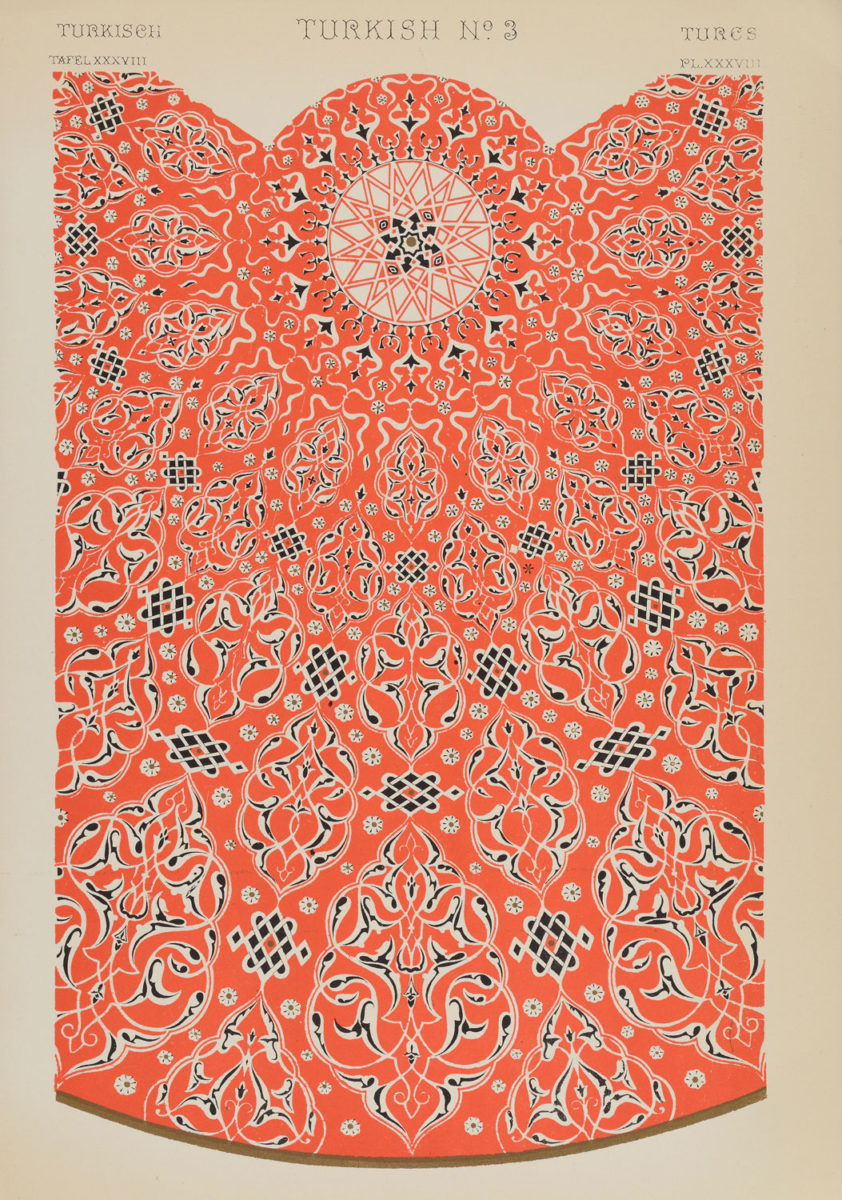 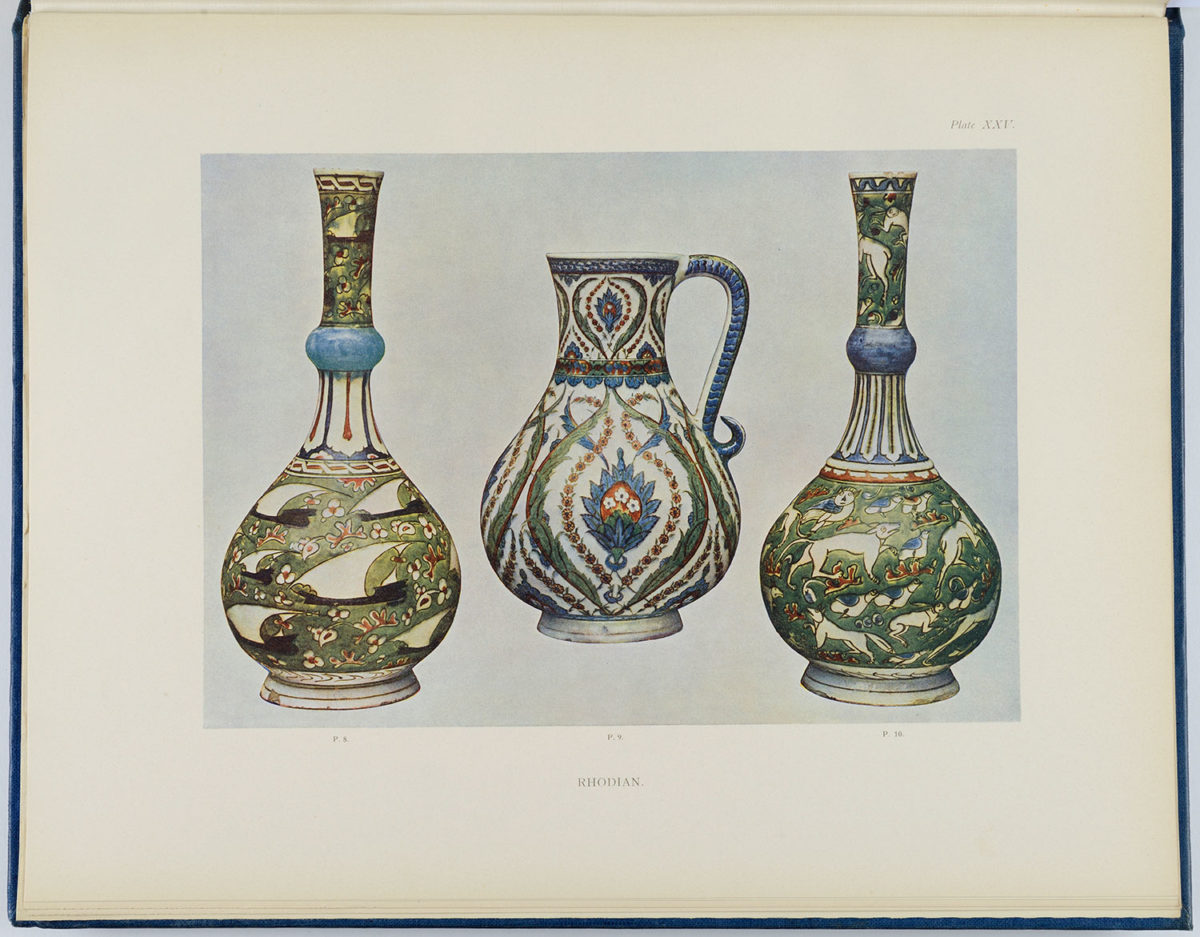 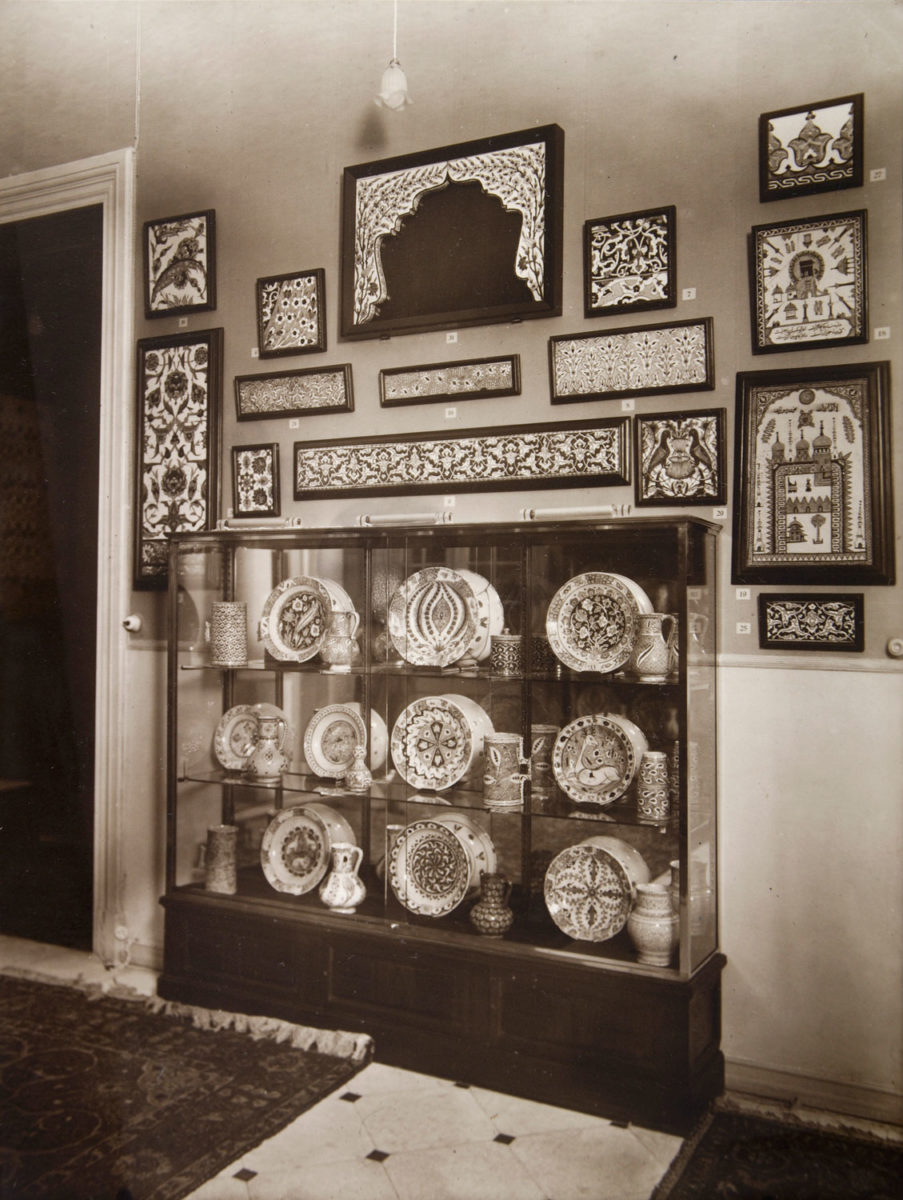 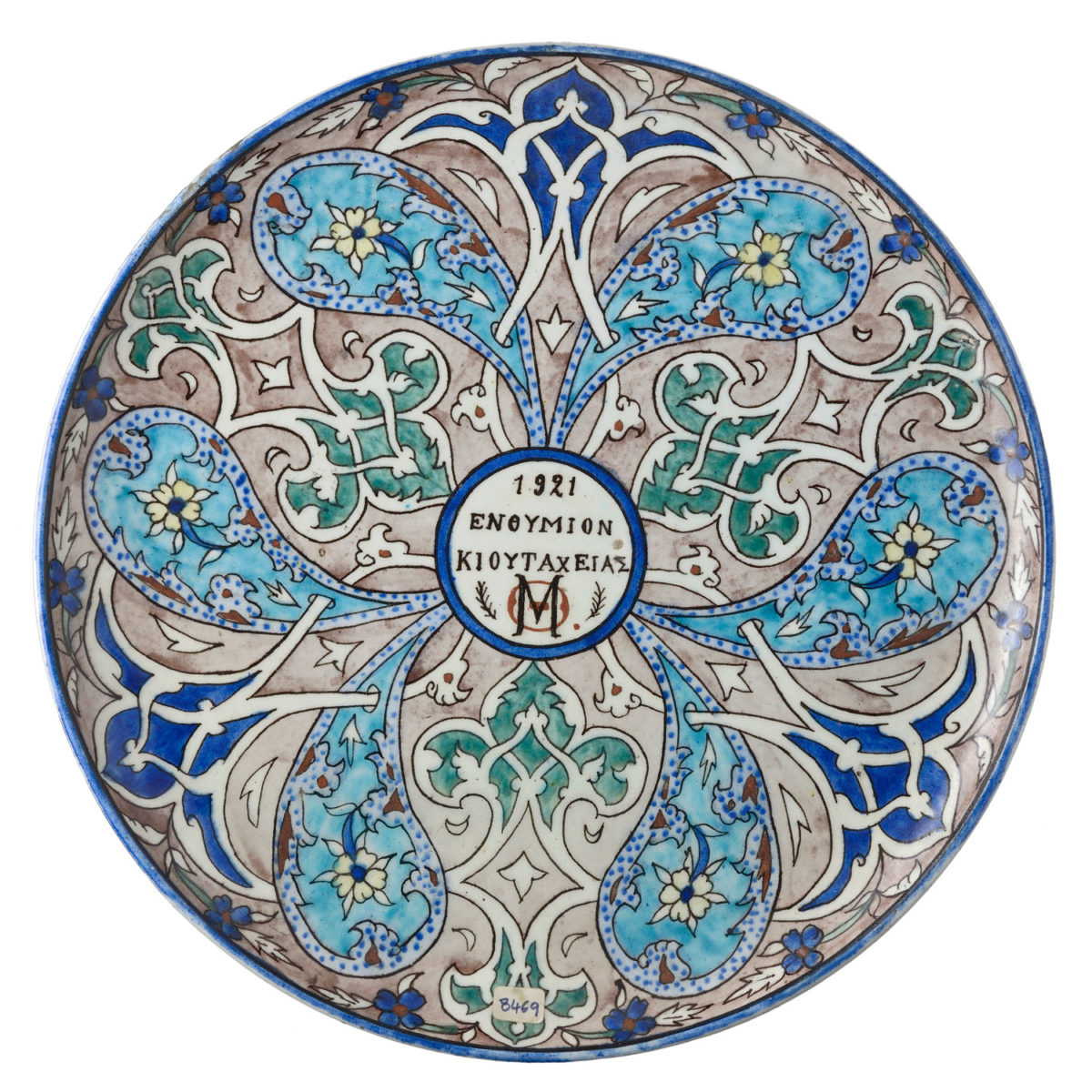 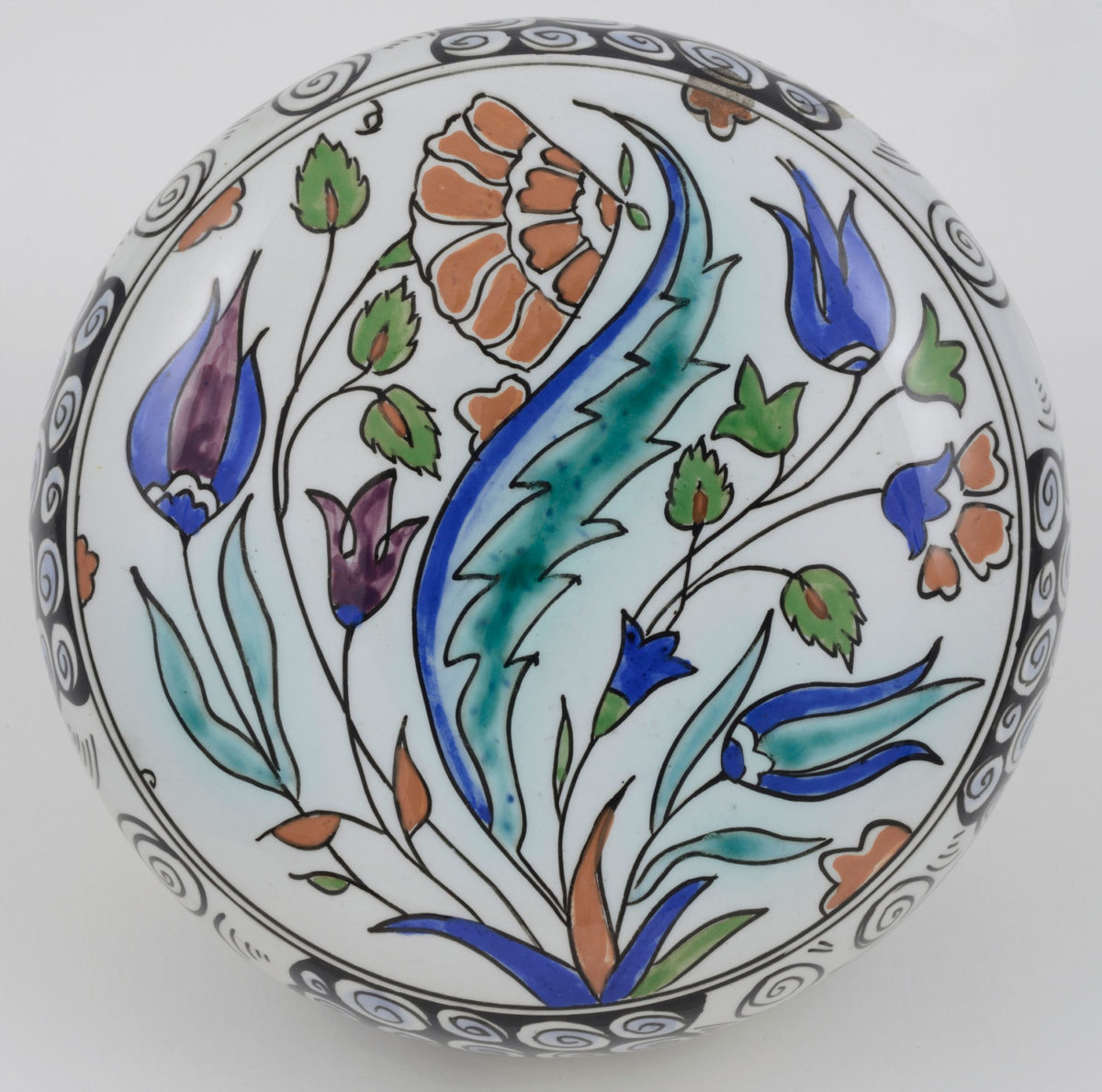 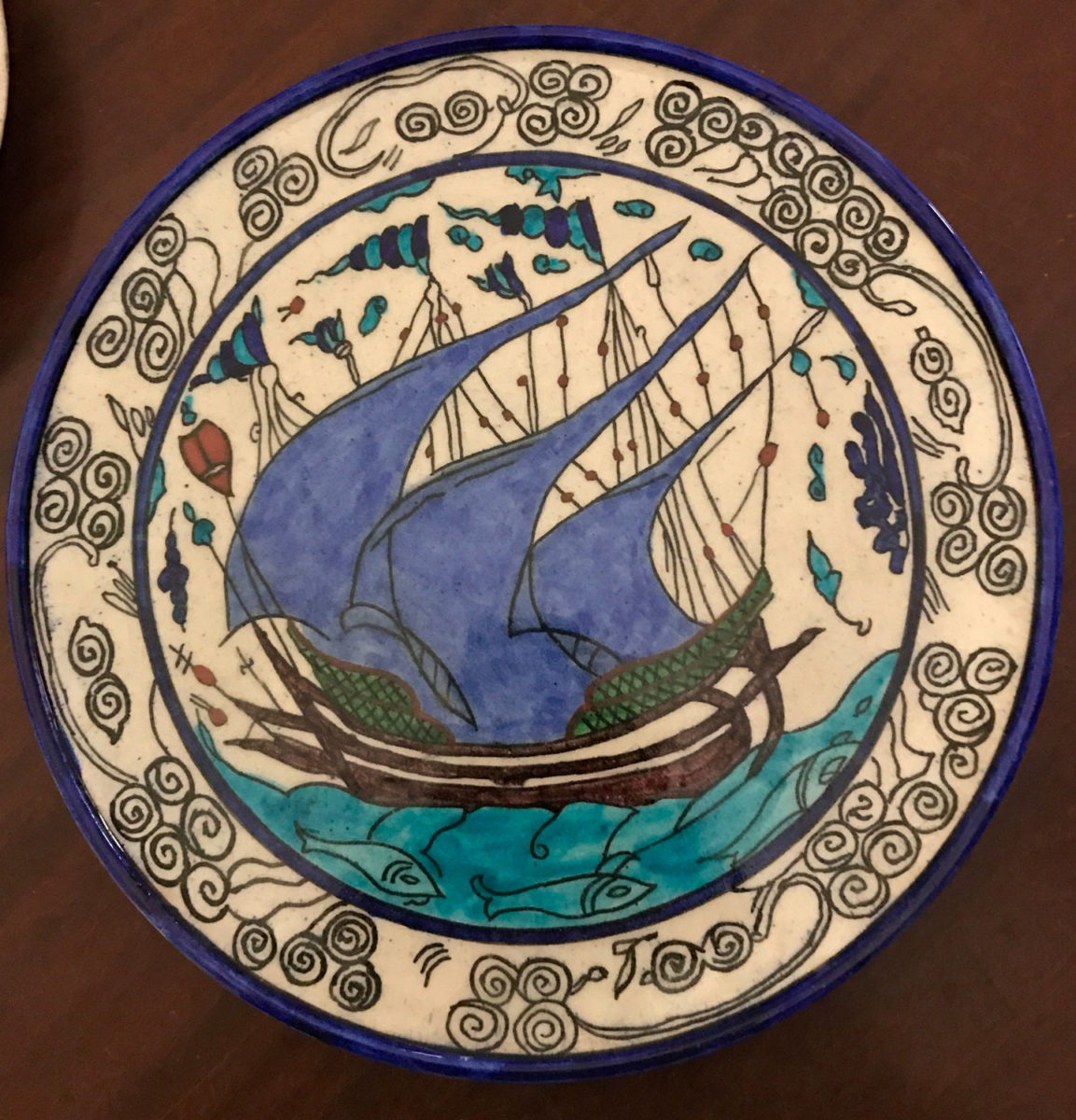 The Magic of Iznik Ceramics

At the Benaki Museum of Islamic Art

“The Magic of Iznik Ceramics” focuses on ceramics of the Ottoman period and specifically on those made in the town of Iznik in Asia Minor in the 16th century. With their bright colours and vibrant designs, these ceramics have been admired and sought after both during the period of their production and also through the 19th century and are considered one of the best achievements in the history of ceramics.

The exhibition’s aim is to highlight a course that starts in the mid-19th century, initially with the Europeans’ interest in and early studies of these ceramics and ends with the Greek workshops and specifically those of Faliron and Rhodes that attempt to revive this art.

The first part of the exhibition focuses on the Europeans’ interest in Iznik ceramics in the 19th century. The creation of collections is a phenomenon featuring in the 19th century and fuelled by Orientalism and the historicist trends of the era promoting the revival of past styles. European travellers and scholars discovered the medieval past of Middle Eastern countries in the art of the Egyptian Mamluks, of Muslim Spain and Iran. Within this context, a special place was held by Islamic ceramics that were included in three big international exhibitions in Europe and awakened the interest of collectors. At the same time specialized exhibitions were organized in big cities such as London, Paris, Munich and Alexandria.

The case of the Iznik ceramics is particularly interesting. Collectors who enhanced their collections buying mainly from art dealers in Cairo and Alexandria, were often ignorant of the works’ true origin. Till the early 20th century, predominant theories were erroneous in regards to the whereabouts of the manufacturing of these vases and tiles. As can be seen from the editions of the time, the production of ceramics were attributed to Iran, Rhodes or Damascus, capturing the views of contemporary European scholars, such as architect Owen Jones, on Ottoman Art’s lack of originality. Along with collections being formed, admiration for Iznik lead some workshops in France, Austria and Italy to manufacture and market porcelain vessels decorated in the Ottoman-style, that includes arabesques and flowers such as tulips, carnations, the tufted “saz” leaf and other motifs.

The second part of the exhibition is about 20th century Greek ceramics and how they relate to the aesthetics of Iznik. From the beginning of the 20th century and especially after 1922, potters from Kutahya sought refuge in Greece. During that period, ceramic workshops were created in Faliron (Kutahya and Kerameikos), where the refugees’ knowledge and experience was made good use of. In the production, the decorative repertory of Iznik ceramics was presented side by side with Greek themes. The influence of Iznik ceramics continued in Greece till the post-war period with the ceramics of Rhodes.

In this exhibition, selected ceramics are displayed for the first time from the Museum Benaki Collections as well as rare publications from the personal collection of Antonis Benakis, the museum’s founder. The selection is enhanced by vessels from the collection of the Museum of Greek Folk Art and Greek Popular Musical Instruments, as well as from private collections.

The exhibition is accompanied by a bilingual (Greek/English) publication that includes photographs of selected works and accompanying texts by Mina Moraitou, curator of the exhibition and of the Benaki Museum of Islamic Art.

On Monday October 16, 2017 and at 5.00 p.m., there will be a talk by Sato Moughalian entitled “David Ohannessian and the Armenian ceramics of Jerusalem”.

The bright blue and green glazes of Armenian ceramics from Jerusalem have become a hallmark of the Sacred City. The beginnings of this distinct art can be traced to Kutahya, in north western Turkey and they became caught up with the turmoil of the First World War. In her talk, Sato Moughalian will locate the revival of the tradition of Kutahya ceramics in the late 19th century and early 20th century as well as the “transportation” of this exceptional art to Jerusalem. David Ohannessian (1884-1953), a distinguished ceramist, had one of the finest workshops in Kutahya in the years before World War I, creating ceramics to order for Ottoman rulers and distinguished Europeans such as Sir Mark Sykes. Ohannessian survived his exile in the Syrian desert in 1916-17 and later settled in Jerusalem, aiming to create ceramic tiles for the planned renovation of the Temple of the Dome of the Rock at the invitation of the British.

David Ohannessian revived his art in British Palestine, also recruiting more craftsmen from Kutahya to follow him, and trained a new generation of Armenians to create colourful and elaborate ceramics. This tradition, created in Jerusalem in 1919, continues to flourish today.

Sato Moughalian is an award-winning New York flautist who has made over 30 chamber music recordings. These last eight years, she has been researching the life and work of her grandfather, ceramist David Ohannessian, “immersing herself” into archives in Turkey, Israel, England and France, and tracing the history of his art. Since 2015, she has published articles in the Toplumsal Tarih, Stambouline journals, a catalogue for an exhibition of Kutahya ceramics for the Komitas Museum-Institute in Yerevan in Armenia, a French anthology entitled A la découverte de la Jérusalem des Arméniens (Paris: Somogy Éditions d’ Art, forthcoming), and given an interview for an episode of the Ottoman History Podcast. She is currently completing a biography on Ohannessian for Redwood Press / Stanford University Press, which is expected to be released in 2019.

The talk will be in English.

Participation in the guided tours is included in the exhibition ticket costing €9, €7.