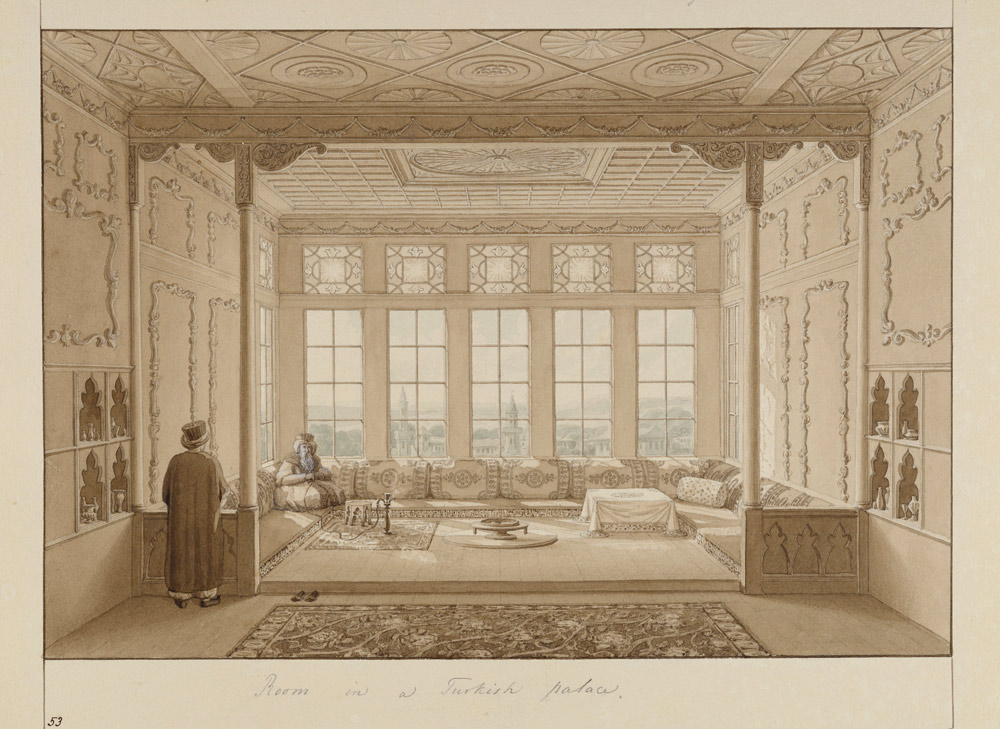 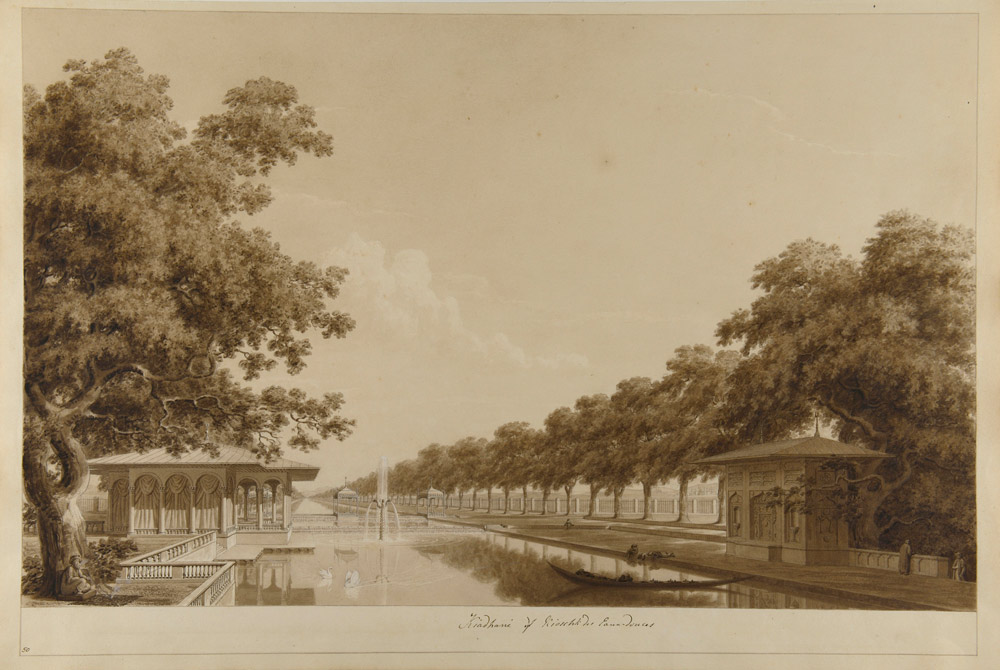 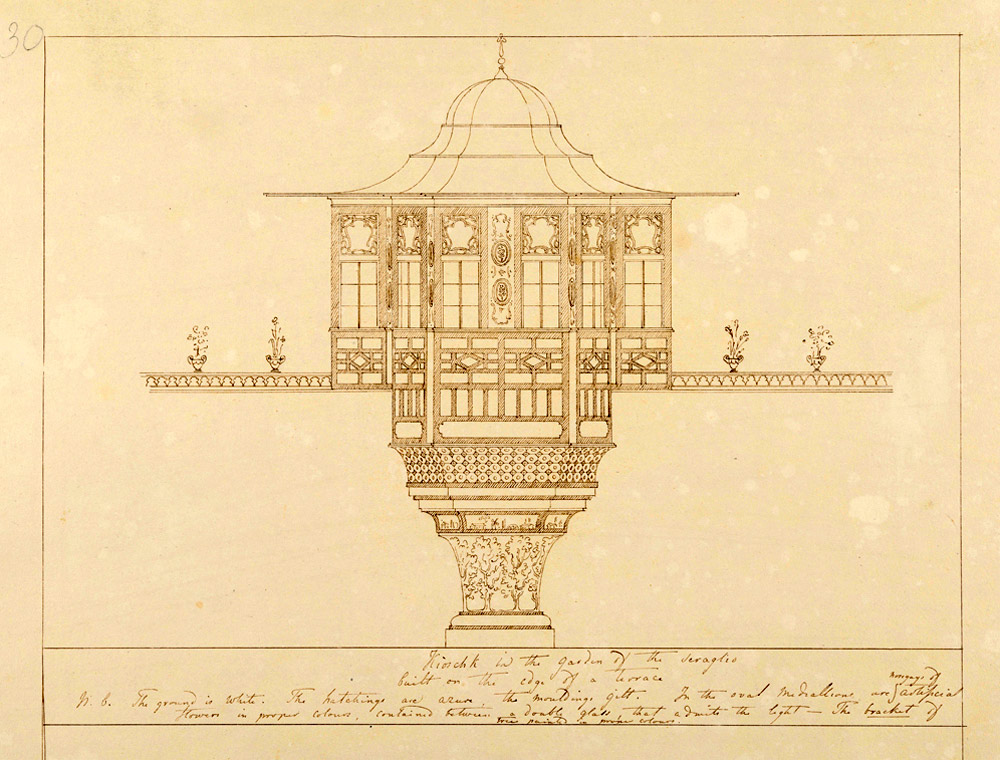 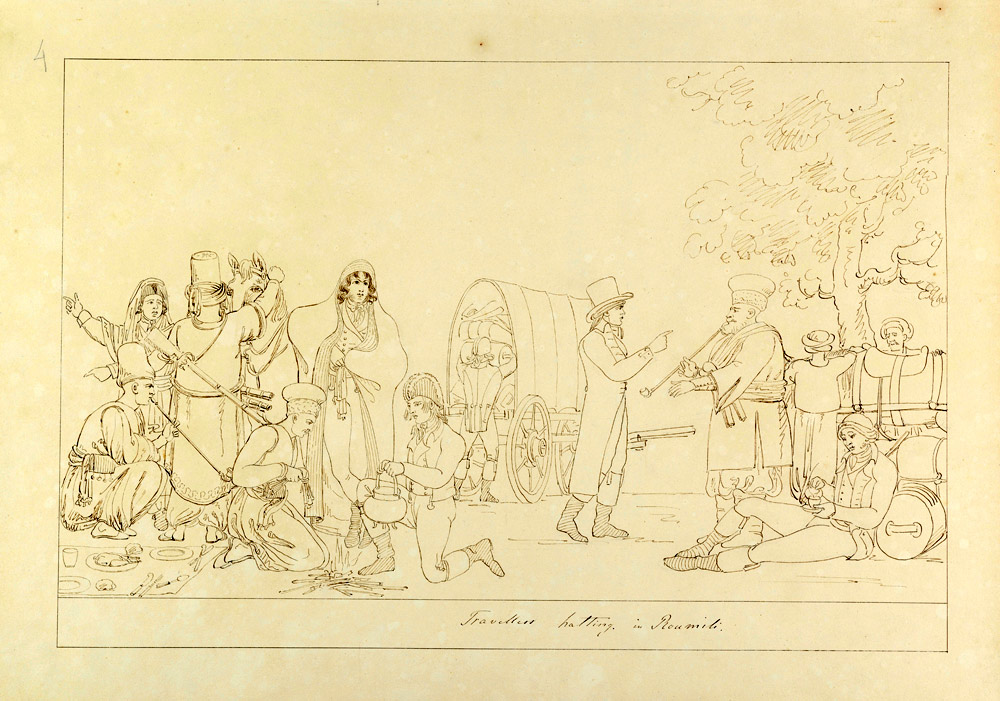 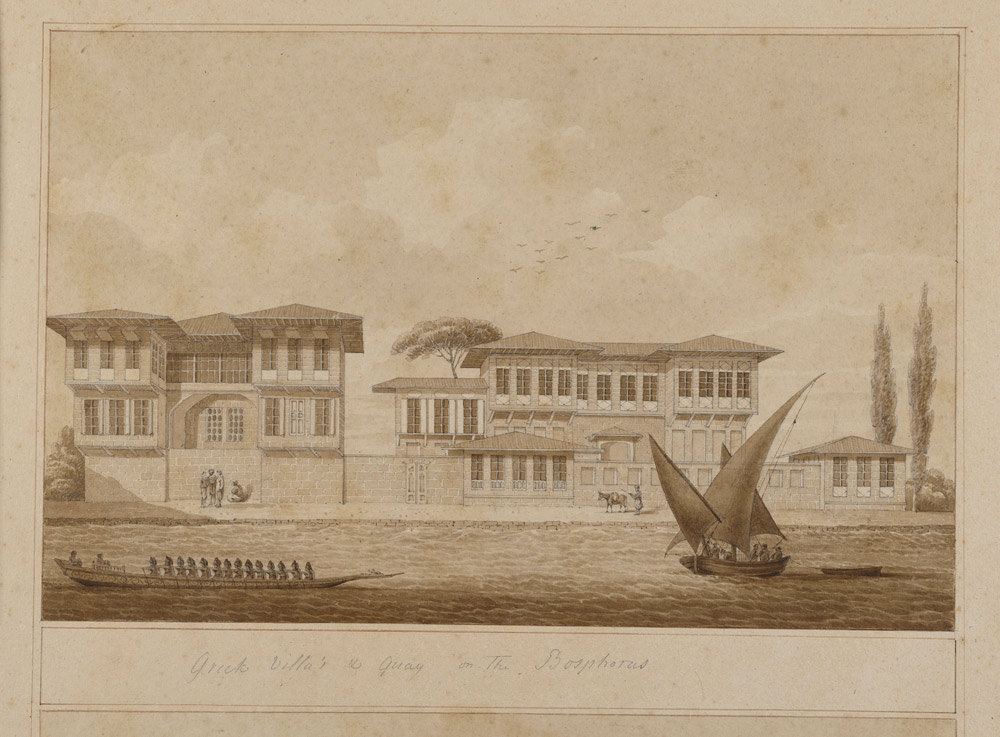 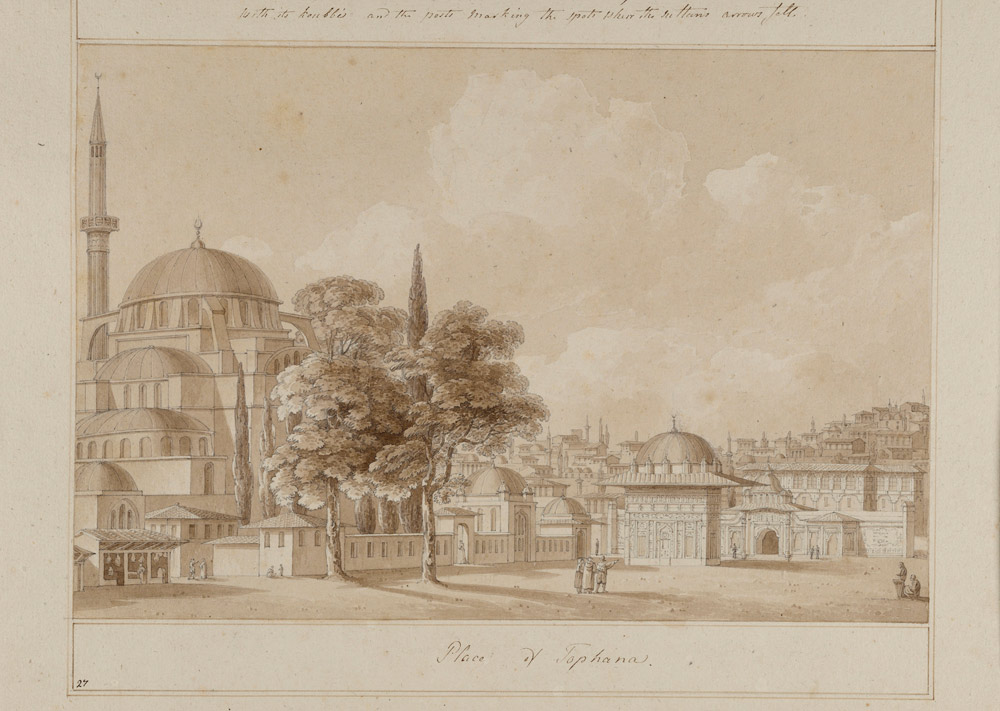 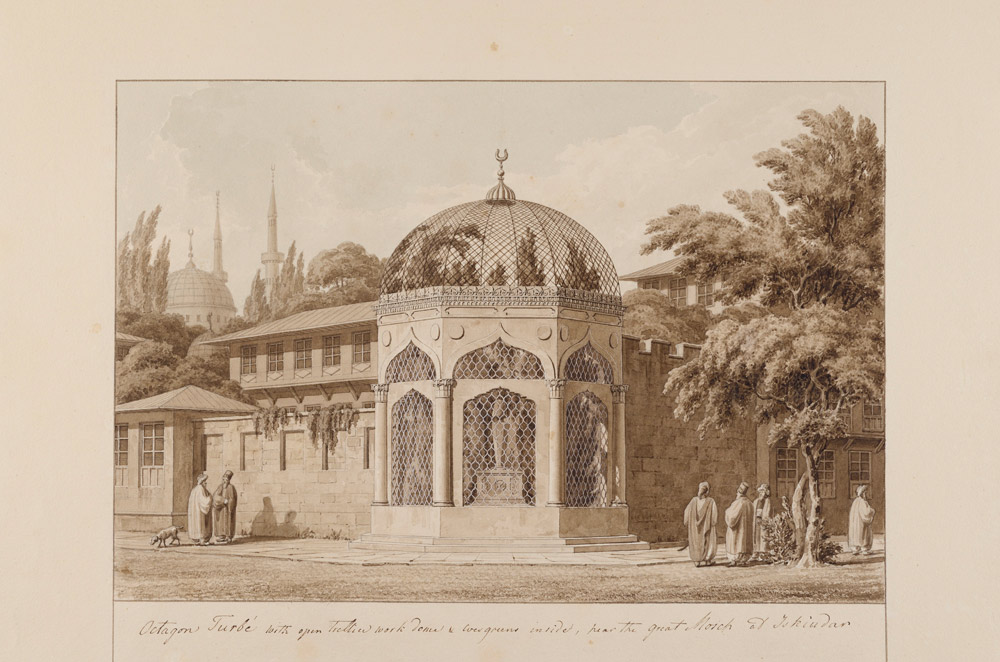 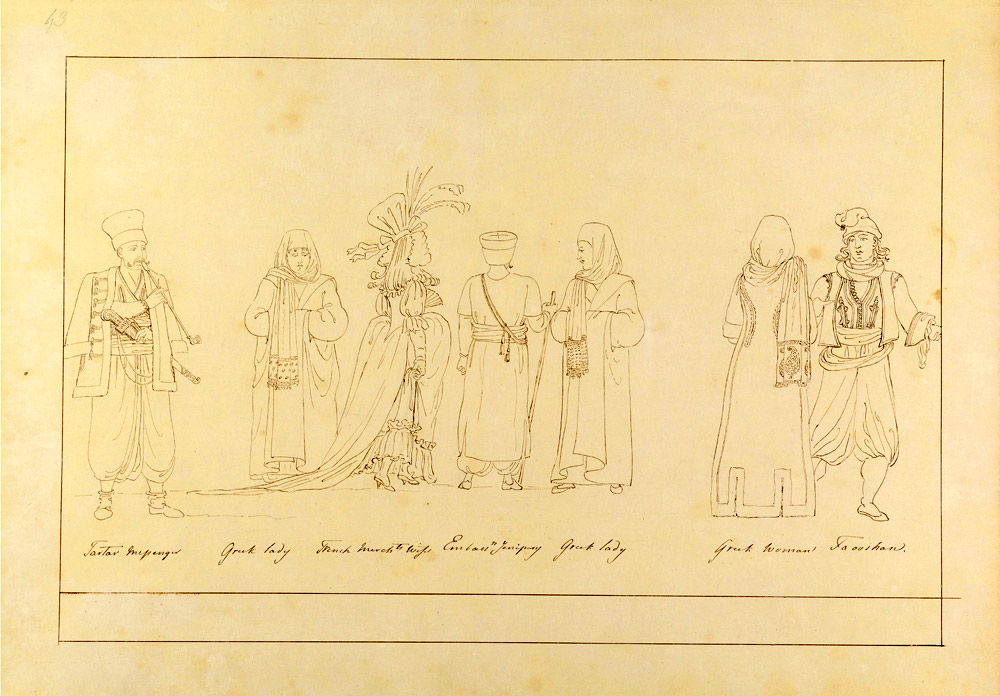 The exhibition THOMAS HOPE: Drawings of Ottoman Istanbul, organized by the Benaki Museum, has just opened (duration until September 25th).

Thomas Hope (1769-1831), a scion of a wealthy banking family, went on a Grand Tour, the traditional trip to Greece and Turkey for the young men of his class, during the last quarter of the 18th century. Virtuoso, with unique collections of antiquities, sculptures and European paintings, a generous sponsor and an expert in the fields of architecture and decoration overturned the artistic settings of his time, leaving his mark on the period of the Regency. He created the “Hope style” which he spread through a series of illustrated manuals with designs for functional and decorative items, as well as a repertoire of costumes.

An extremely gifted designer, Thomas Hope meticulously painted a variety of themes from the places he visited during his Grand Tour. He sorted and held these designs tied in five volumes which he kept in his personal library. After his death, these volumes were sold by his inheritors and all traces were lost. In 1984, by a fortunate discovery, all five volumes of drawings were found in the Library of the Benaki Museum. Antonis Benakis had bought them in 1930. It is a unique finding as the 350 works constitute a treasure of information on the places it illustrates.

A small number of these concerns Egypt, a larger set depict views from Greece, while the largest part is dedicated to the various regions of Turkey, mainly Istanbul.

The exhibition presents 60 drawings from Istanbul. Thomas Hope seems to have been delighted by the capital of the Ottoman Empire as the thematic variety of designs that reflect the city is remarkable. Included in this group of works are: Topographic views and folding panoramas of Istanbul and its environs, Ottoman palaces, halls of the seraglios, gates, mosques, funerary monuments, fountains, gates, the yalı on the Bosporus, the sultan’s entertainments boats. Other scenes include market shops, coffee shops, images of various men, women with children of Istanbul, depictions of costumes, architectural details, accompanied by lengthy explanations and descriptions with comments. The works are of excellent quality because Thomas Hope was an unparalleled designer, a virtuoso of linear draftsman ship comparable to the qualities of a miniature painter. His animated outlines combined with delicate colouring, allowed him to depict details of the buildings and the costumes in such a way to dazzle the viewer.

However, the importance of the Thomas Hope collection is not limited to the aesthetic pleasure it offers to art enthusiasts. The designs constitute a unique treasure of visual testimonies for the scholars of the Ottoman civilization: Firstly, the date of the works, that is the 18th century, makes this corpus an important early account, since this period is rather poor in testimonies of Turkey, as it was the 19th century when most European artists made their way to the Middle East. A second and equally important element that distinguishes the works of Thomas Hope from other pictorial sets of similar theme is the accuracy of his depictions. As it is well known by scholars, many artists-travellers, although they worked on-the-spot, they changed or distorted the actual features of the subject matter (landscape, architecture or people) in order to create impressive compositions. This phenomenon altered the documentary value of the scenes and the alleged visual evidences, in fact, misinform scholars and undermine research. This is not at all the case with Thomas Hope, who designed conscientiously documenting his scenes with absolute accuracy. Moreover, the thematic variety of the collection is unsurpassed, making it a reference point for scholars of various disciplines, especially of the Ottoman era, such as historians, architects, folklorists, costume designers etc.

Especially for Istanbul this is an inexhaustible corpus of material for anyone who wants to reconstruct a panoramic portrait of the city in the 18th century with authentic representations of the landscape, architecture, residents and everyday scenes. Finally, as it is unpublished as a whole it will be highly appreciated by the international academic community.

The exhibition is accompanied by a bilingual publication (in Greek and English) and includes images of the works and texts on the artist and his era by the curators of the exhibition Dr Fani Maria Tsigakou, art historian and Mina Moraitou, curator of the Benaki Museum of Islamic Art.

The exhibition is kindly supported by the Culture and Tourism Office of the Turkish Embassy in Athens.

The exhibition is presented in the Benaki Museum of Islamic Art (22 Ag. Asomaton & 12 Dipilou St.).