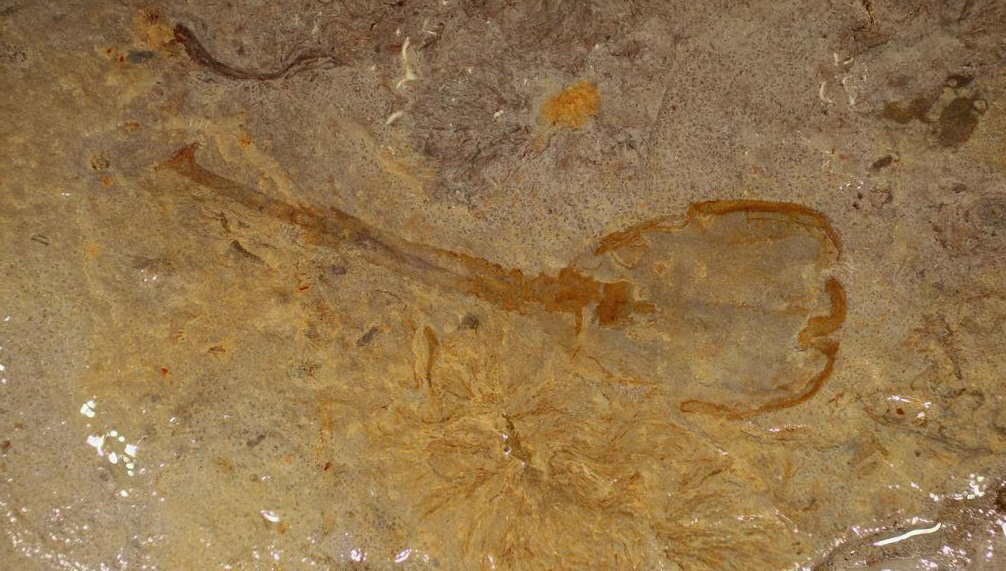 It looks like a flower crudely etched into rock

To the untrained eye, it looks like a flower crudely etched into rock — as if a child had scratched a picture of a bloom. But to the late fossil hunter Lloyd Gunther, the tulip shape he unearthed at Antimony Canyon in northern Utah looked like the remnant of an ancient marine animal.

Years ago, Gunther collected the rock and later gave it to researchers at the University of Kansas’ Biodiversity Institute — just one among thousands of such fossils he donated to the institute over the years.

But this find was the only fossilized specimen of a species previously unknown to science — an “obscure” stalked filter feeder. It has just been detailed for the first time in a paper appearing in the Journal of Paleontology.

“This was the earliest specimen of a stalked filter feeder that has been found in North America,” said lead author Julien Kimmig, collections manager for Invertebrate Paleontology at the Biodiversity Institute. “This animal lived in soft sediment and anchored into the sediment. The upper part of the tulip was the organism itself. It had a stem attached to the ground and an upper part, called the calyx, that had everything from the digestive tract to the feeding mechanism. It was fairly primitive and weird.”

Kimmig researches the taxonomy, stratigraphy and paleoecology of the Cambrian Spence Shale found in Utah and Idaho, where Gunther found the obscure filter feeder.

“The Spence Shale gives us soft-tissue preservation, so we get a much more complete biota in these environments,” he said. “This gives us a better idea of what the early world was like in the Cambrian. It’s amazing to see what groups of animals had already appeared over 500 million years ago, like arthropods, worms, the first vertebrate animals — nearly every animal that we have around today has a relative that already lived during those times in the Cambrian.”

In honor of fossil hunter Gunther, a preeminent collector who performed fieldwork from the 1930s to the 2000s, Kimmig and Biodiversity Institute colleagues Luke Strotz and Bruce Lieberman named the newly described species Siphusauctum lloydguntheri.

The stalked filter feeder is just the second animal placed within its genus, and the first Siphusauctum to be discovered outside the Burgess Shale, a fossil-rich deposit in the Canadian Rockies.

“What these animals were doing was filtering water to get food, like micro-plankton,” Kimmig said. “The thing is, where this one was located we only found a single specimen over a period of 60 years of collecting in the area.”

Kimmig said it isn’t yet known if the newly discovered stalked filter feeder lived a highly solitary life or if it drifted off from a community of similar animals.

“It’s hard to tell from a single specimen,” he said. “There were algae found right next to it, so it likely was transported there. The algae found with it were planktonic algae that were floating themselves. It could have fallen just next to it — but that would be a big coincidence — so that’s why we’re thinking it came loose from somewhere else and got mixed in with the algae.”

Kimmig and his KU colleagues say the newly described specimen varies in key areas from similar known species of stalked filter feeders from the Cambrian.

“There are several differences in how the animal looked,” Kimmig said. “If you look at the digestive tract preserved in this specimen, the lower digestive tract is closer to the base of the animal compared to other animals. The calyx is very slim — it looks like a white wine glass, whereas in other species it looks like a big goblet. What we don’t have in this specimen that the others have are big branches for filter feeding. We don’t know if those weren’t preserved or if this one didn’t have them.”

According to the researchers, there are no species alive today that claim lineage to Siphusauctum lloydguntheri. But Kimmig said there were a few contemporary examples that share similarities.

“The closest thing to the lifestyle — but not a relative — would be crinoids, commonly called sea lilies,” he said. “Unfortunately, there’s likely not a relative of Siphusauctum in the world anymore. We have thousands of similar fossil specimens in the Burgess Shale, but it’s hard to identify what these animals actually were. It might be possibly related to contemporary entoprocts, which are a lot smaller than this one — but it’s hard to tell if they’re related at all.”

Ultimately, the mysterious stalked filter feeder is a reminder of the strange and vast arc of evolution where species continuously come and go, according to Kimmig.

“It is enigmatic because we don’t have anything living that is exactly like it,” he said. “What is fascinating about this animal is we can clearly relate it to animals existing in the Cambrian and then we just don’t find it anymore. It’s just fascinating to see how evolution works. Sometimes it creates something — and it just doesn’t work out. We have some lineages like worms that lived long before the Cambrian and haven’t changed in appearance or behavior, then we have things that were around for a couple of million years and just disappeared because they were chance victims of mass extinctions.”