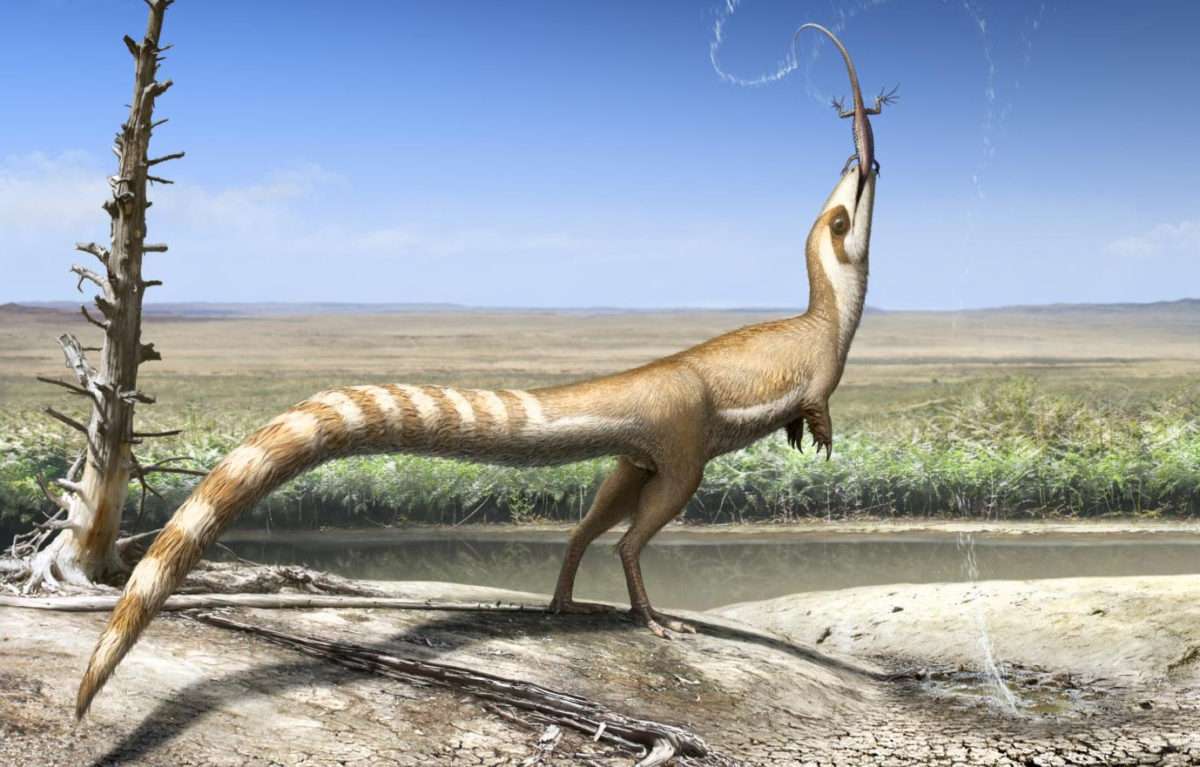 Researchers from the University of Bristol have revealed how a small feathered dinosaur used its colour patterning, including a bandit mask-like stripe across its eyes, to avoid being detected by its predators and prey.

By reconstructing the likely colour patterning of the Chinese dinosaur Sinosauropteryx, researchers have shown that it had multiple types of camouflage which likely helped it to avoid being eaten in a world full of larger meat-eating dinosaurs, including relatives of the infamous Tyrannosaurus Rex, as well as potentially allowing it to sneak up more easily on its own prey.

Fiann Smithwick from the University’s School of Earth Sciences led the work, which has been published today in the journal Current Biology. He said: “Far from all being the lumbering prehistoric grey beasts of past children’s books, at least some dinosaurs showed sophisticated colour patterns to hide from and confuse predators, just like today’s animals.

“Vision was likely very important in dinosaurs, just like today’s birds, and so it is not surprising that they evolved elaborate colour patterns.” The colour patterns also allowed the team to identify the likely habitat in which the dinosaur lived 130 million years ago.

The work involved mapping out how dark pigmented feathers were distributed across the body and revealed some distinctive colour patterns.

These colour patterns can also be seen in modern animals where they serve as different types of camouflage.

The patterns include a dark stripe around the eye, or ‘bandit mask’, which in modern birds helps to hide the eye from would-be predators, and a striped tail that may have been used to confuse both predators and prey.

Senior author, Dr Jakob Vinther, added: “Dinosaurs might be weird in our eyes, but their colour patterns very much resemble modern counterparts.

“They had excellent vision, were fierce predators and would have evolved camouflage patterns like we see in living mammals and birds.”

The small dinosaur also showed a ‘counter-shaded’ pattern with a dark back and light belly; a pattern used by many modern animals to make the body look flatter and less 3D.

This stops animals standing out from their background, making them harder to spot, avoiding detection from would-be predators and potential prey.

Previous work on modern animals, carried out by one of the authors, Bristol’s Professor Innes Cuthill, has shown that the precise pattern of countershading relates to the specific environments in which animals live.

This principal was applied to Sinosauropteryx, and allowed for the reconstruction of its habitat 130 million years ago. The countershading on Sinosauropteryx went from dark to light high on the body, suggesting that it would be more likely to live in open habitats with minimal vegetation.

Behavioural ecologist Professor Cuthill, who was also a co-author of this study, said: “We’ve shown before that countershading can act as effective camouflage against living predators. It’s exciting that we can now use the colours of extinct animals to predict the sort of environment they lived in.”

Fiann Smithwick added: “By reconstructing the colour of these long-extinct dinosaurs, we have gained a better understanding of not only how they behaved and possible predator-prey dynamics, but also the environments in which they lived.

“This highlights how palaeocolour reconstructions can tell us things not possible from looking at just the bones of these animals.”