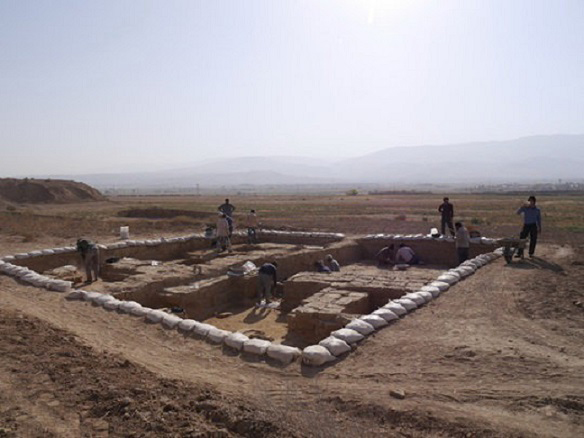 Iranian and German archaeologists exploring the ancient site of Rivi in North Khorasan Province have revealed important remains of the Bronze Age up to the Sassanid period.

Part of a columned hall from the Achaemenid era on the southern side of the site is the most important find during the fifth season of excavations, Mohammad-Javad Jafari, head of this season’s investigations said.

Archaeological research works in the ancient Rivi site started in 2012-2013. Since then archaeologists accessed remains of settlements from the Bronze and Iron Age, the Achaemenid, the Parthian, the Sassanid dynasties and the early Islamic period.

“Based on the studies, various architectural and archaeological evidence from the Parthian and the Sassanid era were discovered in the Rivi site which indicate the sequence of settlement in the area in the aftermath of the Achaemenid era,” Jafari noted.

“Concurrent with the archaeological group, a team of geomorphology experts from Berlin University and University of Yazd launched studies on the site and its geographical vicinity,” Jafari added.