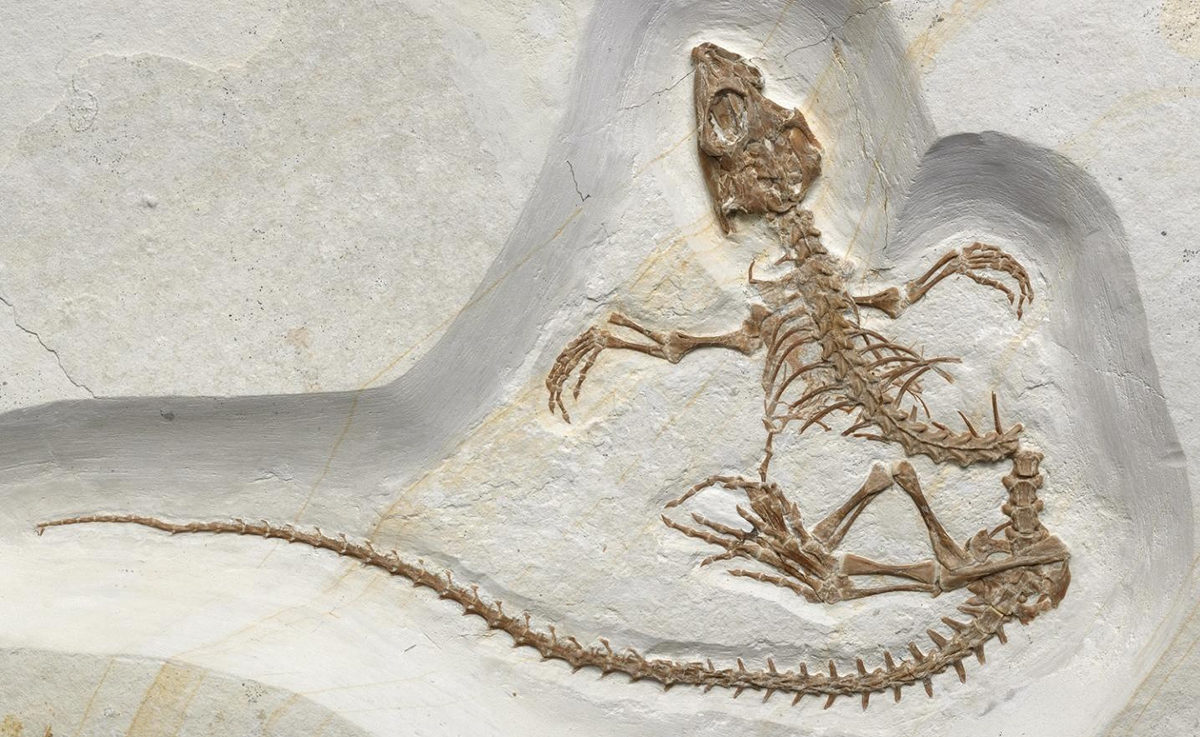 Using modern research tools on a 155-million-year-old reptile fossil, scientists at Johns Hopkins and the American Museum of Natural History report they have filled in some important clues to the evolution of animals that once roamed land and transitioned to life in the water.

A report on the new discoveries about the reptile, Vadasaurus herzogi, appeared online in the Nov. 8 issue of Royal Society Open Science, suggesting that some of the foot-long animal’s features, including its elongated, whip-like tail, and triangular-shaped head, are well suited to aquatic life, while its relatively large limbs link it to land-loving species.

Vadasaurus, which is the Latin term for “wading lizard,” was discovered in limestone quarries near Solnhofen, Germany, part of a once-shallow sea long explored for its rich trove of fossil finds.

The well-preserved fossil is housed in the American Museum of Natural History in New York, where the job of unlocking its evolutionary secrets fell to museum research associate Gabriel Bever, Ph.D., who is also assistant professor of functional anatomy and evolution at the Johns Hopkins University School of Medicine, and Mark Norell, Ph.D., the museum’s paleontology division chair.

“Anatomic and behavioral characteristics of modern groups of living things accumulated over long spans of time,” says Bever. “Fossils can teach us a lot about that evolutionary history, including the order in which those features evolved and their adaptive role in a changing environment.”

“Anytime we can get a fossil like this that is so well preserved, and so significant in understanding a major environmental transition, it is very important,” says Norell. “It’s so important,” he adds, “that we can consider Vadasaurus to be the Archaeopteryx of rynchocephalians.”

According to Bever, their work adds to the list of sea creatures whose ancestors were land-dwelling vertebrates. They include modern-day whales, seals, and sea snakes, and ancient (and now-extinct) species of ichthyosaurs, mosasaur, and plesiosaurs.

Bever says their study offers evidence that Vadasaurus, likely an adult when it died, can be linked by its anatomy to a small group of marine species called pleurosaurs, which have long been thought to have terrestrial roots. Pleurosaurs lived during the Jurassic period, 185 to 150 million years ago. The eel-like creatures had reduced limbs that were probably used for steering rather than propulsion in the water. Until now, fossils of only three ancient species of pleurosaurs have been discovered.

Using two types of statistical algorithms and reconstructions of evolutionary “trees,” Bever and Norell say that Vadasaurus and the pleurosaurs are part of a larger lineage of reptiles called Rhynchocephalia. Like the sea-loving pleurosaurs, Vadasaurus’ skull was a triangular shape, an adaptation found among many streamlined, water-dwelling animals, such as most fish, eels and whales. An elongated snout, common among sea animals, featured teeth farther away from the body for ensnaring fish.

By examining the shape and structure of the Vadasaurus’ skull, Bever and Norell also concluded that Vadasaurus’ bite was likely a quick, side-to-side motion, compared with the slower, stronger bite typical of many land-dwelling animals.

Some 155 million years ago, Vadasaurus’ tail had begun to lengthen like most modern sea animals, says Bever, but not to the size of the 5-foot pleurosaur. Vadasaurus, they found, had 24 pre-sacral vertebrae, which span from the head to the beginning of the tail, whereas pleurosaurus had more than 50 such back bones.

Despite its aquatic features, Vadasaurus retained some features more often found among land vertebrates. For example, Vadasaurus still had the large limbs, relative to the size of its body, expected of a land-dwelling reptile. Bever speculates that Vadasaurus did not use its limbs for propulsion in the water, but to steer. He says Vadasaurus may have swum like a modern sea snake, moving its spinal column with an undulating kind of motion.

“Our data indicate that Vadasaurus is an early cousin of the pleurosaur,” says Bever. “And these two reptiles are closely related to modern tuatara.” The modern tuatara is a lizard-like, land-dwelling reptile that lives on New Zealand’s coastal islands and is the single remaining species of rhynchocephalian still left on Earth.

Bever notes that a complete evolutionary history of Vadasaurus will require more data and fossil finds.

“We don’t know exactly how much time Vadasaurus was spending on land versus in the water. It may be that the animal developed its aquatic adaptations for some other reason, and that these changes just happened to be advantageous for life in the water,” says Bever.