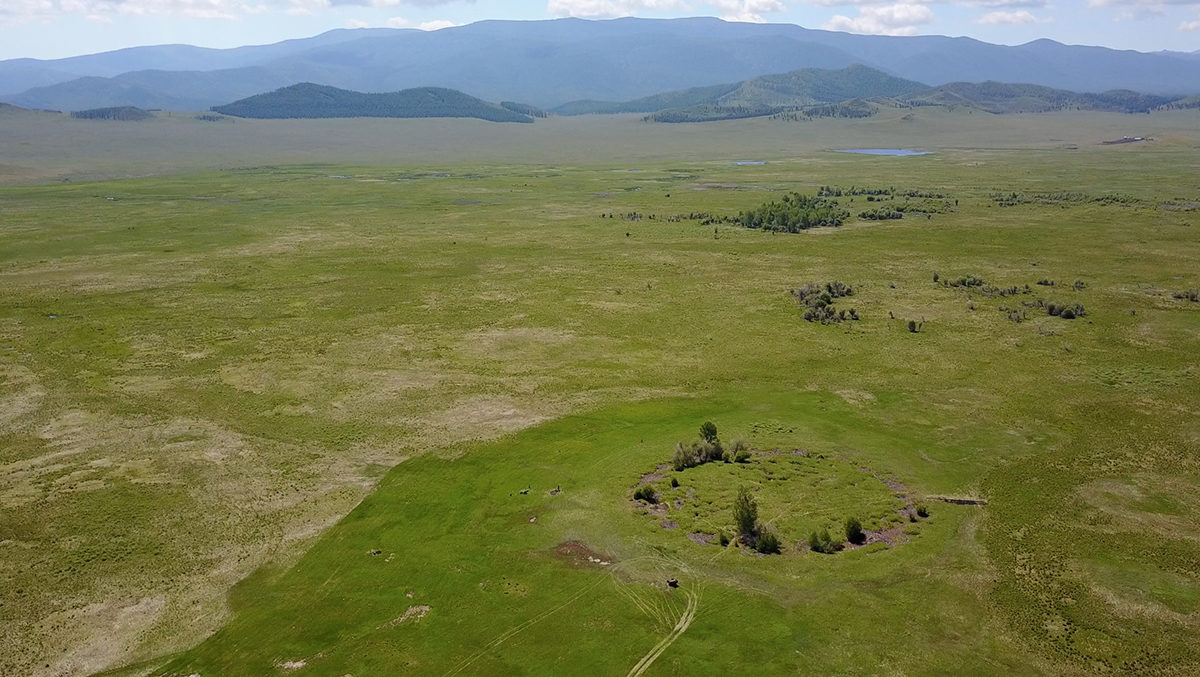 Swiss archaeologist discovers the earliest tomb of a Scythian prince

A kurgan in South Siberia

Deep in a swamp in the Russian republic of Tuva, SNSF-funded archaeologist Gino Caspari has discovered an undisturbed Scythian burial mound.

All the evidence suggests that this is not only the largest Scythian princely tomb in South Siberia, but also the earliest.

Gino Caspari made the most significant find in his career to date not with a shovel, but at a computer. A recipient of Swiss National Science Foundation (SNSF) funding, archaeologist Caspari discovered a circular structure on high-resolution satellite images of the Uyuk River valley (Siberia) on his computer screen. An initial trial dig carried out this summer by the Bern University scientist together with the Russian Academy of Sciences and the Hermitage Museum confirmed his suspicion: the structure is a kurgan, a Scythian princely tomb.

Looking back at the beginnings

Working with a Swiss-Russian team, Caspari was able to prove that the burial mound – referred to as Tunnug 1 (or Arzhan 0) – was similar in construction to the kurgan Arzhan 1 located only ten kilometres away to the northeast. Arzhan 1 had long been regarded as the earliest Scythian princely tomb in the region, which is also known as the “Siberian Valley of Kings” owing to the numerous kurgans found there. The earliest princely tombs consist of a stone packing with a circular arrangement of chambers. The walls of the chambers are made of larch logs. Scythian burial objects typically include weapons, horse’s harnesses and objects decorated in the so-called animal style.

Wooden beams found by Caspari during the test excavation date back to the 9th century BC, predating Arzhan 1, which was built at the turn of the 9th to the 8th century BC and excavated in the 1970s. “We have a great opportunity here,” says a delighted Caspari, commenting on the results of the trial dig published in the current issue of Archaeological Research in Asia (*).

“Archaeological methods have become considerably more sophisticated since the 1970s. Today we have completely different ways of examining material to find out more about the transition from the Late Bronze Age to the Iron Age,” remarks the SNSF-funded researcher. He also stresses that the way we look at prehistoric times is changing radically thanks to genetics, isotope analysis and geophysical methods as well as developments in geographic information systems and remote sensing.

The Arzhan 0 burial mound is in an inaccessible location amid swampy terrain, which also makes it harder for grave robbers to reach. “The kurgan is five arduous hours by off-road vehicle from the nearest settlement,” Caspari points out. As it may never have been disturbed, it could contain similar treasures to Arzhan 2. Between 2001 and 2004, a German team of archaeologists discovered an undisturbed burial chamber in Arzhan 2 containing the richest collection of burial artefacts ever found in the Eurasian steppe. Over a thousand gold objects had been placed with the two corpses in the tomb’s main chamber, in addition to magnificently adorned weapons, pots and horses with exquisite harnesses. Made of solid gold, the necklace of the Scythian prince from Arzhan 2 weighs 2 kilos alone. But the date of the burial is put at the 7th century BC, i.e. well into the Iron Age.

The climatic characteristics of the Siberian soil add to Caspari’s hopes. In the Uyuk Valley, the permafrost layer largely begins just a few metres below the surface. Everything above that thaws in summer, and organic material rots. However, beneath the thick stone packing of the kurgans, the rays of sunlight are unable to thaw out the soil.

“Very rarely ice lenses form directly beneath the kurgans,” explains Caspari. The ice prevents the decay of organic matter and preserves sensitive material. Caspari is expecting further finds to be unearthed in the course of the project: “If we’re lucky, we might even find some well-preserved wood carvings or carpets under the stones, or perhaps an ice mummy.”