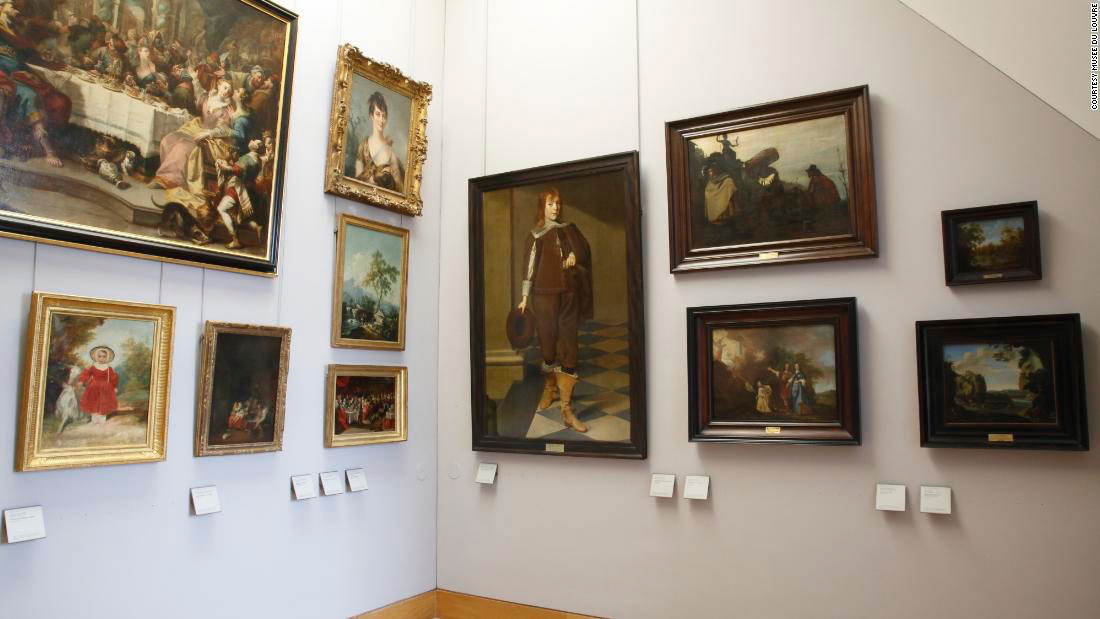 The works are displayed in separate halls

The new initiative of the Louvre, as estimated by the Spanish newspaper “El Pais”, is seen as a globally unique undertaking since the end of World War II. In a discreet corner of one of the most visited halls of the Richelieu wing of the prestigious Paris Museum and between the Rubens thematic Hall and the one with works by Nicolas Poussin, the Louvre has created two more halls where a special series of works is being exhibited. These 31 works are unsurpassed aesthetically and have different techniques and origins; from a tranquil landscape by Theodore Rousseau to a woman’s portrait by Elisabeth Vigee le Brun, official painter of Marie Antoinette. Their common denominator is that they all once belonged to the properties of French Jews plundered by the Nazi armies during World War II and repatriated after its end.

As “El Pais” points out, these works were found in Hitler’s museum in Linz, Austria, after the war or in the private “collection” of Hermann Goering, the Nazis’ greatest looter of art works.

Between 1940 and 1945, the Nazis took possession of almost 100,000 works of art and valuables on French soil. At the end of the war, 60,000 of these were repatriated and almost 45.000 were identified and returned to their lawful owners. Today, 2,000 of these works and artefacts are still waiting to be identified and claimed. 1,700 of them are kept in the Louvre, 800 of which are paintings. One third are in the museum’s store rooms, while the rest have been loaned to various public museums in France to be exhibited.

The Spanish newspaper notes that whereas after the war looted works of art were returned by the thousand, numbers dropped significantly after 1950. Since then, just a little over 50 works were returned to their identified, legitimate owners.

“Very often we have been accused of wanting to keep them. Essentially we have gone to great lengths for this not to happen. Ηalls such as this one were created so as to avoid this kind of criticism. Our aim is to return as many as we can. We are aware that these works do not belong to us” says head of the Louvre’s paintings department, Sebastien Allard.

On all the works is a label marked MNR (Musées Nationaux Récupération), representing the agency for the rescue of the looted works and they each have an inscription that writes “Work whose keeping is assigned to the Museum, pending its return to its legitimate owner”. The works documented as MNR such as “The Lion’s Head” by Géricault or “The Forest” by Boucher, are not allowed to leave France and are not in the catalogues of public collections. Officially they are on the move and are only occasionally displayed, says the newspaper.

The purpose of the new hall is to facilitate their identification by the owners or their descendants. In this case, they should declare their past property to the General Directorate of National Heritage, although the procedures are very intricate. In 1999, the French State set up an independent committee that verifies the works’ origin and the identity of their owners. The latter must provide either proof of their purchase, catalogues of collections of the time, or family and other photographs showing the work being claimed.

“It is usually considered a time-consuming matter, but it is a truly intricate task. We have to return the work to the right person and this is usually extremely difficult,” says Louvre’s curator of Italian Painting Vincent Delieuvin to El Pais. The former is also member of a group of 30 representatives of French museums, set up in 2013 to trace the original owners of these works.

The descendants of the looted works have welcomed the Louvre’s initiative, although they believe this gesture is long overdue and not sufficiently dynamic. “It is better than nothing, but it could be more ambitious” stated Alain Monteagle, retired history teacher and former mayor of Montreuil, to the newspaper. Monteagle spent many years searching for stolen works from the collection of his aunt and uncle John and Anna Jaffe, confiscated and sold by the Nazis in 1943 and which included works by Goya, Rembrandt and Turner. To date he has managed to locate ten of them, thanks to the catalogue of Rose Valland, the brave curator who risked her life making notes on art confiscated by the Nazis. Valland’s personality inspired the character played by Cate Blanchett in the film “Monuments Men”.

After a long, private investigation, Monteagle managed to claim four paintings belonging to his family from the French state. Among them was a work by the Venetian painter Guardi on display at the Toulouse Museum. Monteagle himself is of the opinion that this initiative should belong to the state and not to individuals: “The state has sufficient means to employ genealogy experts to seek out the last descendant in line of each looted work’s owner. This has started to happen in some specific cases. But the question is why it has not happened till now. The return of looted works was never a priority” declares Monteagle.