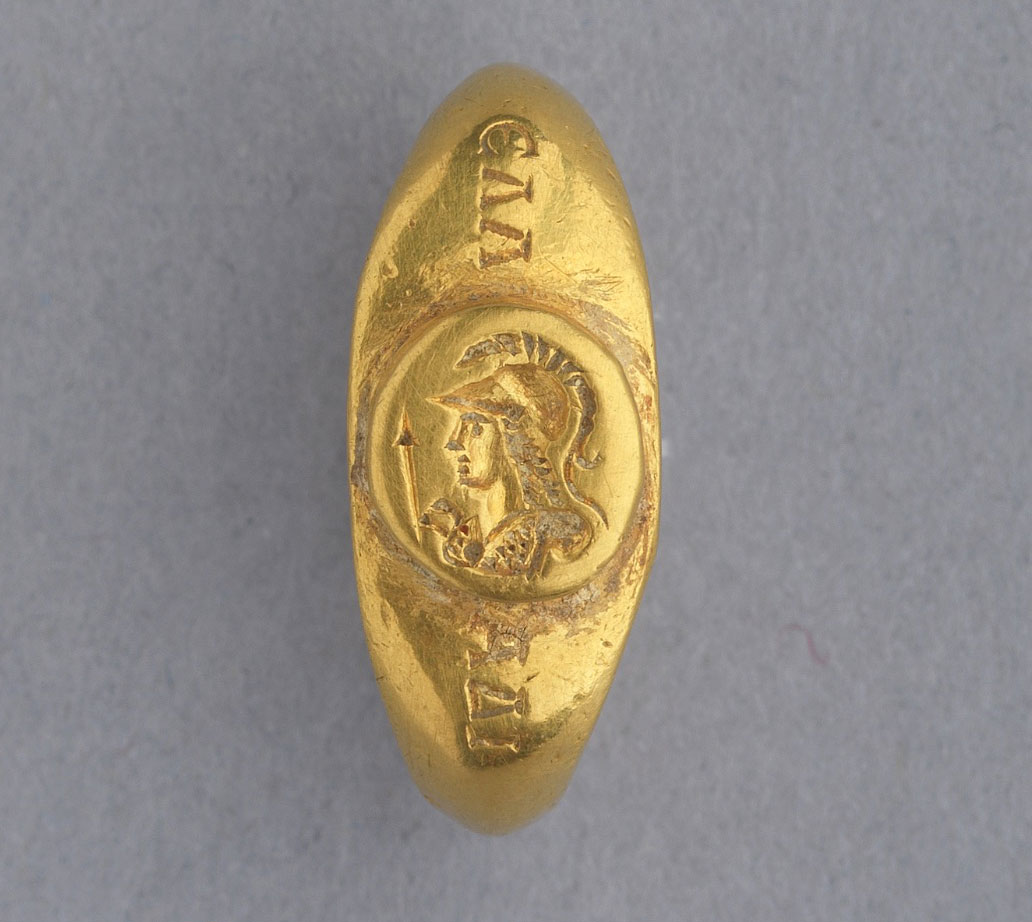 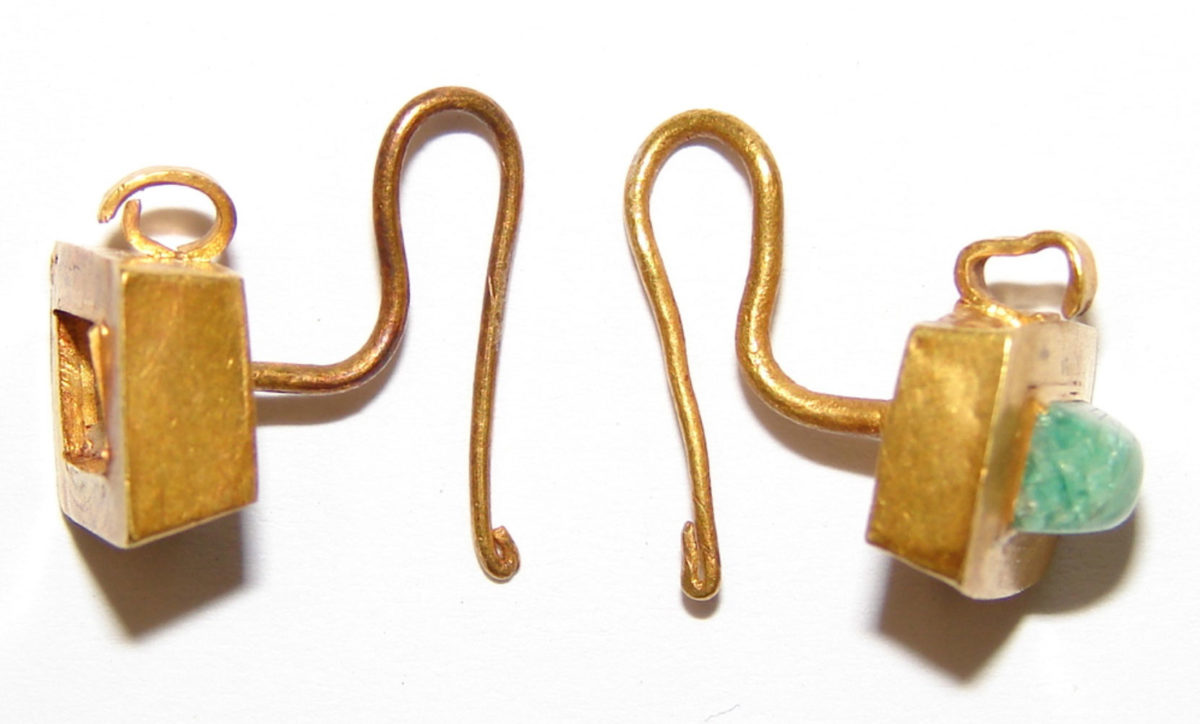 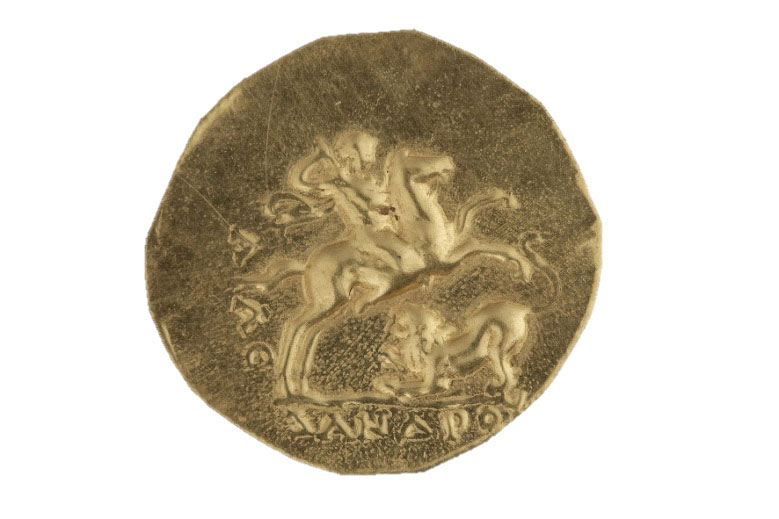 Ellada or Hellas (the “Christian name” of a woman), who was probably of Athenian origin, lived, died and was buried in Thessaloniki. Time went by and when Langadas street was being opened in 1929, the sargophagus of Attic origin was found, which had “offered her hospitality” for 1,600 years.

Inside the impressive marble sarcophagus, depicting Amazons in battle, a gold signet ring was found with the carved bust of Athena on its bezel and the name of its owner engraved round it in the “dedicatory” dative case (ΕΛΛΑΔΙ).

The massive, heavy sarcophagus was moved to the Archaeological Museum of Thessaloniki (initially to Yeni Cami and then, 33 years later in 1962, to today’s Archaeological Museum), the handful of grave goods were quickly gathered, recorded and “shoved” into its storerooms (just like almost 300 marble sarcophagi occasionally found when excavating the cemeteries of Thessaloniki – except for the couch shaped one discovered unplundered in 1837, near the Kalamaria Gate, containing the bones of a couple and a wooden box with gold jewellery and a magic text on gold sheet that were ‟acquired ” by the Kunsthistorisches Museum of Vienna).

Another 90 years went by, until the storerooms were recently opened to become digitalized (as part of the Ministry of Culture’s programme of archaeological material digitalization) and it was an opportunity for the finds to be studied.

The first conclusions reached were presented in one of the most “captivating” papers ( P. Adam-Veleni and A.Touloumtzidou’s, “Gold grave goods in sarcophagi of Thessaloniki; in their historical and social context”) at the 31st conference on the Archaeological Work of the past year in Macedonia ad Thrace (31st AWMT), otherwise “poor” in impressive finds (almost all university excavations have stopped due to lack of funds, while rescue excavations by local ephorates continue at sites that are now well known and with limited results).

The owners of inscribed or plain sarcophagi were high ranking Roman citizens of the time(1st to 3rd c. AD) who were permitted to be adorned after death with such artefacts as: gold rings, double gold danakes (with the head of Alexander the Great),pendants depicting Tyche/Fortuna at the helm with the horn of Amalthea, a pendant shaped like an oil lamp, jewellery with the figure of the god Asclepius, a gold ring with a light blue sapphire of a rare type since it initially belonged to an earring, as indicated by its approximate tear shape and a small hole at its narrow end, a double gold danake with the head of Alexander the Great on one side and a nude Alexander seated on a rock and Bucephalus on the other. The inscription ΑΛΕΞΑΝΔΡΟΥ is on its perimeter.There is also a gold ring with a sardonyx stone depicting the embossed hands of a man and woman joined in a hand shake, and inscribed ΟΜΟΝΟΙΑ.

To follow are characteristic observations made by the current researchers as presented at the conference.

‟In general, the right hand handshake in the Roman world symbolizes mutual faith in the closing of an agreement or contract. Rings with similar depictions often accompanied by the inscription ΟΜΟΝΟΙΑ, were however wedding rings given by the future husband to his wife to be worn on the middle figure of the left hand, since the vein starting from that finger was believed to end up in the heart.”

“To conclude, the small number of gold coins in the unplundered sarcophagi do not suggest the poverty of their owners but very likely is related to the bequeathal of property to the relatives, leaving the deceased the luxury of strictly personal objects such as signet rings. In the difficult economic conditions prevailing in Macedonia during the 3rd c. AD, under the shadow of raids by the barbarians, Charon’s obol is replaced less often by gold coins and more frequently by the danakes. The latter, especially those that depict Alexander the Great, clearly reflect the myth sought after by the ruling class when recollecting its glorious past”.