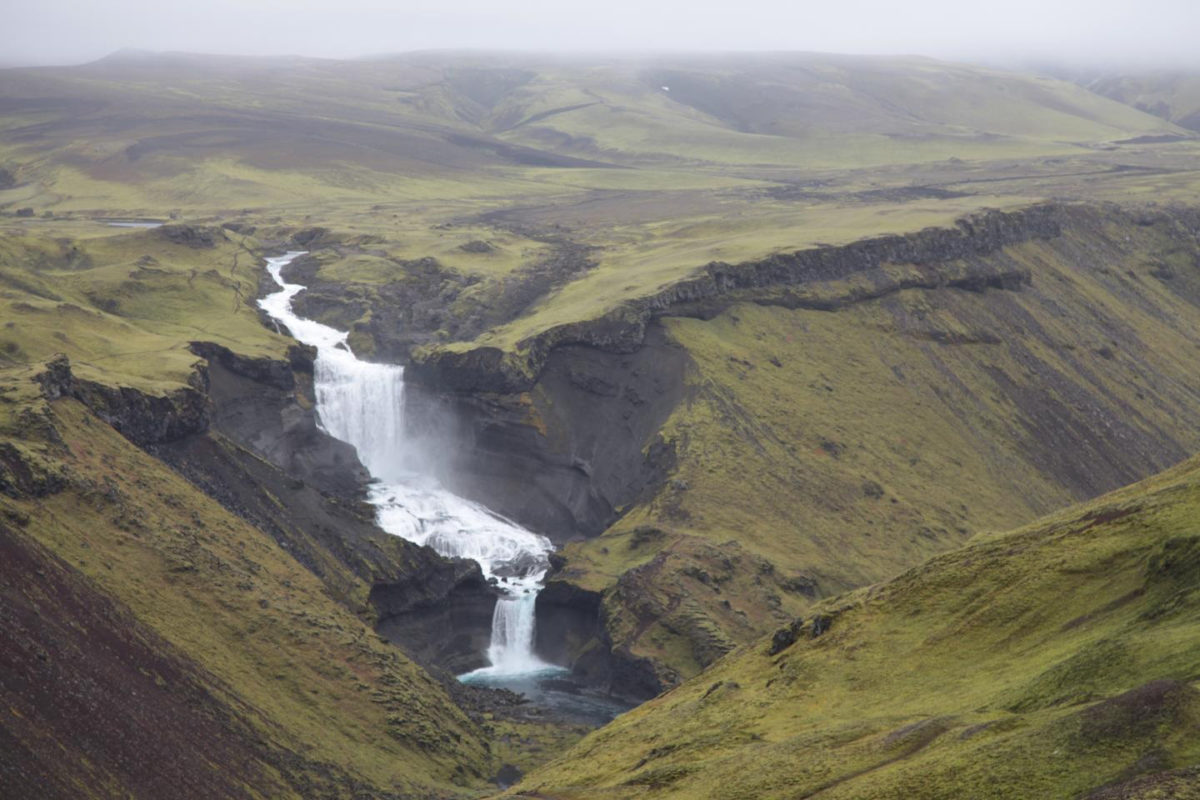 Memories of the largest lava flood in the history of Iceland, recorded in an apocalyptic medieval poem, were used to drive the island’s conversion to Christianity, new research suggests.

A team of scientists and medieval historians, led by the University of Cambridge, has used information contained within ice cores and tree rings to accurately date a massive volcanic eruption, which took place soon after the island was first settled.

Having dated the eruption, the researchers found that Iceland’s most celebrated medieval poem, which describes the end of the pagan gods and the coming of a new, singular god, describes the eruption and uses memories of it to stimulate the Christianisation of Iceland. The results are reported in the journal Climatic Change.

The eruption of the Eldgjá in the tenth century is known as a lava flood: a rare type of prolonged volcanic eruption in which huge flows of lava engulf the landscape, accompanied by a haze of sulphurous gases. Iceland specialises in this type of eruption – the last example occurred in 2015, and it affected air quality 1400 kilometres away in Ireland.

The Eldgjá lava flood affected southern Iceland within a century of the island’s settlement by Vikings and Celts around 874, but until now the date of the eruption has been uncertain, hindering investigation of its likely impacts. It was a colossal event with around 20 cubic kilometres of lava erupted – enough to cover all of England up to the ankles.

The Cambridge-led team pinpointed the date of the eruption using ice core records from Greenland that preserve the volcanic fallout from Eldgjá. Using the clues contained within the ice cores, the researchers found that the eruption began around the spring of 939 and continued at least through the autumn of 940.

“This places the eruption squarely within the experience of the first two or three generations of Iceland’s settlers,” said first author Dr Clive Oppenheimer of Cambridge’s Department of Geography. “Some of the first wave of migrants to Iceland, brought over as children, may well have witnessed the eruption.”

Once they had a date for the Eldgjá eruption, the team then investigated its consequences. First, a haze of sulphurous dust spread across Europe, recorded as sightings of an exceptionally blood-red and weakened Sun in Irish, German and Italian chronicles from the same period.

Then the climate cooled as the dust layer reduced the amount of sunlight reaching the surface, which is evident from tree rings from across the Northern Hemisphere. The evidence contained in the tree rings suggests the eruption triggered one of the coolest summers of the last 1500 years. “In 940, summer cooling was most pronounced in Central Europe, Scandinavia, the Canadian Rockies, Alaska and Central Asia, with summer average temperatures 2°C lower,” said co-author Professor Markus Stoffel from the University of Geneva’s Department of Earth Sciences.

The team then looked at medieval chronicles to see how the cooling climate impacted society. “It was a massive eruption, but we were still amazed just how abundant the historical evidence is for the eruption’s consequences,” said co-author Dr Tim Newfield, from Georgetown University’s Departments of History and Biology. “Human suffering in the wake of Eldgjá was widespread. From northern Europe to northern China, people experienced long, hard winters and severe spring-summer drought. Locust infestations and livestock mortalities occurred. Famine did not set in everywhere, but in the early 940s we read of starvation and vast mortality in parts of Germany, Iraq and China.”

“The effects of the Eldgjá eruption must have been devastating for the young colony on Iceland – very likely, land was abandoned and famine severe,” said co-author Professor Andy Orchard from the University of Oxford’s Faculty of English. “However, there are no surviving texts from Iceland itself during this time that provide us with direct accounts of the eruption.”

But Iceland’s most celebrated medieval poem, Voluspá (‘The prophecy of the seeress’) does appear to give an impression of what the eruption was like. The poem, which can be dated as far back as 961, foretells the end of Iceland’s pagan gods and the coming of a new, singular god: in other words, the conversion of Iceland to Christianity, which was formalised around the turn of the eleventh century.

Part of the poem describes a terrible eruption with fiery explosions lighting up the sky, and the Sun obscured by thick clouds of ash and steam:

“The sun starts to turn black, land sinks into sea; the bright stars scatter from the sky. Steam spurts up with what nourishes life, flame flies high against heaven itself.”

The poem also depicts cold summers that would be expected after a massive eruption, and the researchers link these descriptions to the spectacle and impacts of the Eldgjá eruption, the largest in Iceland since its settlement.

The poem’s apocalyptic imagery marks the fiery end to the world of the old gods. The researchers suggest that these lines in the poem may have been intended to rekindle harrowing memories of the eruption to stimulate the massive religious and cultural shift taking place in Iceland in the last decades of the tenth century.

“With a firm date for the eruption, many entries in medieval chronicles snap into place as likely consequences – sightings in Europe of an extraordinary atmospheric haze; severe winters; and cold summers, poor harvests; and food shortages,” said Oppenheimer. “But most striking is the almost eyewitness style in which the eruption is depicted in Voluspá. The poem’s interpretation as a prophecy of the end of the pagan gods and their replacement by the one, singular god, suggests that memories of this terrible volcanic eruption were purposefully provoked to stimulate the Christianisation of Iceland.”