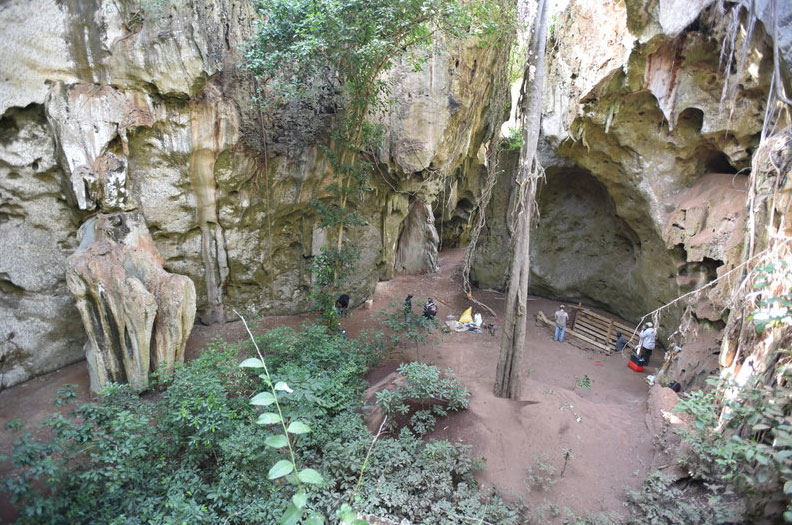 Longest archaeological sequence in the area

The first substantial cave record from coastal Kenya ranges from the Middle Stone Age to the Iron Age, showing gradual changes in cultural, technological and symbolic innovations beginning at 67,000 years ago.

A project led by the Max Planck Institute for the Science of Human History has excavated the Panga ya Saidi cave site, in the coastal hinterland of Kenya. The excavations and analyses, announced in Nature Communications, represent the longest archaeological sequence in East Africa over the last 78,000 years. The evidence for gradual cultural changes does not support dramatic revolutions, and despite being close to the coast, there is no evidence that humans were using coastal ‘super-highways’ for migrations.

An international, interdisciplinary group of scholars working along the East African coast have discovered a major cave site which records substantial activities of hunter-gatherers and later, Iron Age communities. Detailed environmental research has demonstrated that human occupations occur in a persistent tropical forest-grassland ecotone, adding new information about the habitats exploited by our species, and indicating that populations sought refuge in a relatively stable environment. Prior to this cave excavation, little information was available about the last 78,000 years from coastal East Africa, with the majority of archaeological research focused on the Rift Valley and in South Africa.

A large-scale interdisciplinary study, including scientific analyses of archaeological plants, animals and shells from the cave indicates a broad perseverance of forest and grassland environments.  As the cave environment underwent little variation over time, humans found the site attractive for occupation, even during periods of time when other parts of Africa would have been inhospitable. This suggests that humans exploited the cave environment and landscape over the long term, relying on plant and animal resources when the wider surrounding landscapes dried. The ecological setting of Panga ya Saidi is consistent with increasing evidence that Homo sapiens could adapt to a variety of environments as they moved across Africa and Eurasia, suggesting that flexibility may be the hallmark of our species. Homo sapiens developed a range of survival strategies to live in diverse habitats, including tropical forests, arid zones, coasts and the cold environments found at higher latitudes.

Technological innovations occur at 67,000 years ago

Carefully prepared stone tool toolkits of the Middle Stone Age occur in deposits dating back to 78,000 years ago, but a distinct shift in technology to the Later Stone Age is shown by the recovery of small artefacts beginning at 67,000 years ago. The miniaturization of stone tools may reflect changes in hunting practices and behaviors. The Panga ya Saidi sequence after 67,000, however, has a mix of technologies, and no radical break of behavior can be detected at any time, arguing against the cognitive or cultural ‘revolutions’ theorized by some archaeologists. Moreover, no notable break in human occupation occurs during the Toba volcanic super-eruption of 74,000 years ago, supporting views that the so-called ‘volcanic winter’ did not lead to the near-extinction of human populations, though hints of increased occupation intensity from 60,000 years ago suggests that populations were increasing in size.

The deep archaeological sequence of Panga ya Saidi cave has produced a remarkable new cultural record indicative of cultural complexity over the long term.  Among the recovered items are worked and incised bones, ostrich eggshell beads, marine shell beads, and worked ochre. Panga ya Saidi has produced the oldest bead in Kenya, dating to ~65,000 years ago. At about 33,000 years ago, beads were most commonly made of shells acquired from the coast. While this demonstrates contact with the coast, there is no evidence for the regular exploitation of marine resources for subsistence purposes.  Ostrich eggshell beads become more common after 25,000 years ago, and after 10,000 years ago, there is again a shift to coastal shell use. In the layers dating to between ~48,000 to 25,000 years ago, carved bone, carved tusk, a decorated bone tube, a small bone point, and modified pieces of ochre were found. Though indicative of behavioral complexity and symbolism, their intermittent appearance in the cave sequence argues against a model for a behavioral or cognitive revolution at any specific point in time.

Project Principal Investigator and Director of the Department of Archaeology at the Max Planck Institute for the Science of Human History Dr. Nicole Boivin states, “The East African coastal hinterland and its forests and have been long considered to be marginal to human evolution so the discovery of Panga ya Saidi cave will certainly change archaeologists’ views and perceptions.”

Group Leader of the Stable Isotopes Lab Dr. Patrick Roberts adds, “Occupation in a tropical forest-grassland environment adds to our knowledge that our species lived in a variety of habitats in Africa.”

“The finds at Panga ya Saidi undermine hypotheses about the use of coasts as a kind of ‘superhighway’ that channeled migrating humans out of Africa, and around the Indian Ocean rim,” observes Professor Michael Petraglia.

The international consortium of researchers involved in this project is headed by the Max Planck Institute for the Science of Human History, in partnership with the National Museums of Kenya.