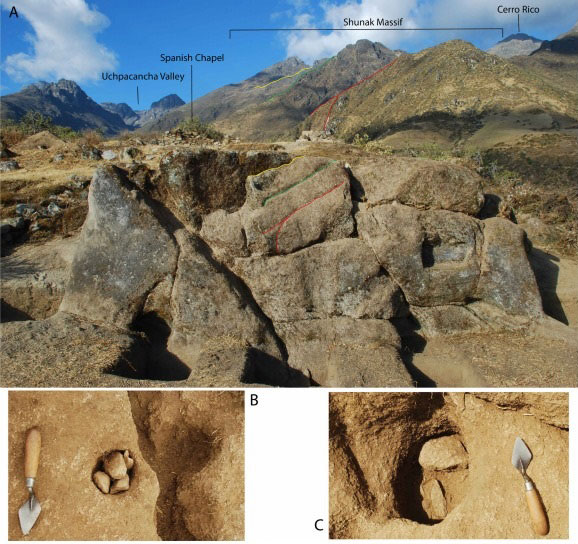 Research in the Andes has yielded evidence for a complex association between settlement sites and mortuary monuments, tied to concepts of death, ancestor veneration and water.

The site contains two small settlements, a cosmological centre, and a funerary sector of subterranean tombs. The author’s study reveals the stunning relation between ceremonial sites and cemeteries which underpins complex Andean concepts of death and renewal.

The authors paid special attention to the cosmological core of the site, which is arranged around a series of carved rocks – huanca -, a central huaca ¬(deity/ancestor), and a communal subterranean tomb. It was discovered that the various features of the site can be related to the surrounding landscape, which is remarkable since archaeological examples establishing a direct link between site and landscape in the Andes are not common. Even more remarkable is the fact that the discovery is supplemented by bioarchaeological data (the analyzed subterranean tomb – pukullo – presented in the research).

In the Prehispanic Andes the landscape was innately animated, and Kipia is positioned at the center of its particular physical environment. In this sense, Kipia was not just a repository for the dead, but more widely a place of communion between the living and the departed, associated to the central huaca-huanca, and the other carved rock-faces.

The importance of Kipia lies in its role as a local huaca dedicated to the lightening deity in which overt manifestations of life and death cohabited. In turn, Kipia linked into a network of other larger potentially sacred sites, such as the lakes.

Excavated, comparative highland Late Intermediate Period (AD 1000-1450) tombs are limited, especially ones linked to important sacred sites. In synthesis, this study makes a valuable contribution to the very limited literature on the use of communal burial structures in the Andes that is based on excavation, detailed osteological analysis and is in direct connection with a particular sacred landscape.

Dr. Alexis Mantha, an expert on Andean Archeology from Université Montréal, outlines: “This article provides a very interesting and rare case study of a complex animated ritual landscape in the highlands of Ancash, Peru, during late Andean prehistory. The authors convincingly examine the intricate ritual relationships among the skeletal content of a subterranean tomb (pukullo) and other features of the surrounding landscape such as a stone monolith (huanca), peaks and highland lakes.”