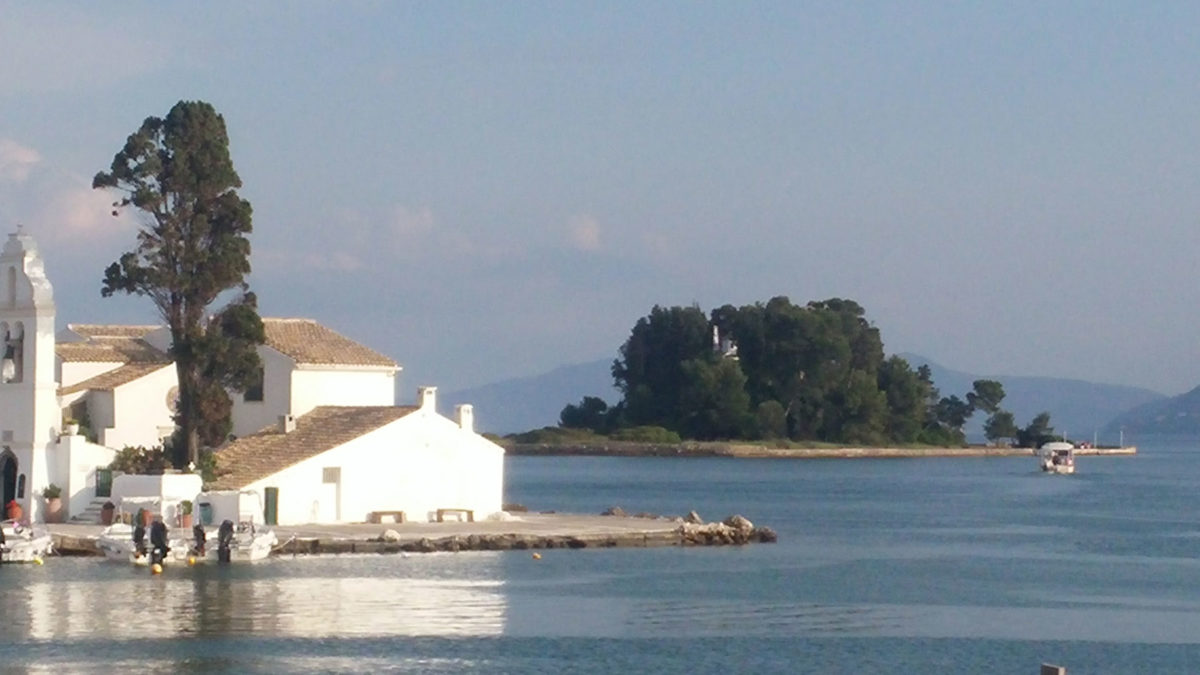 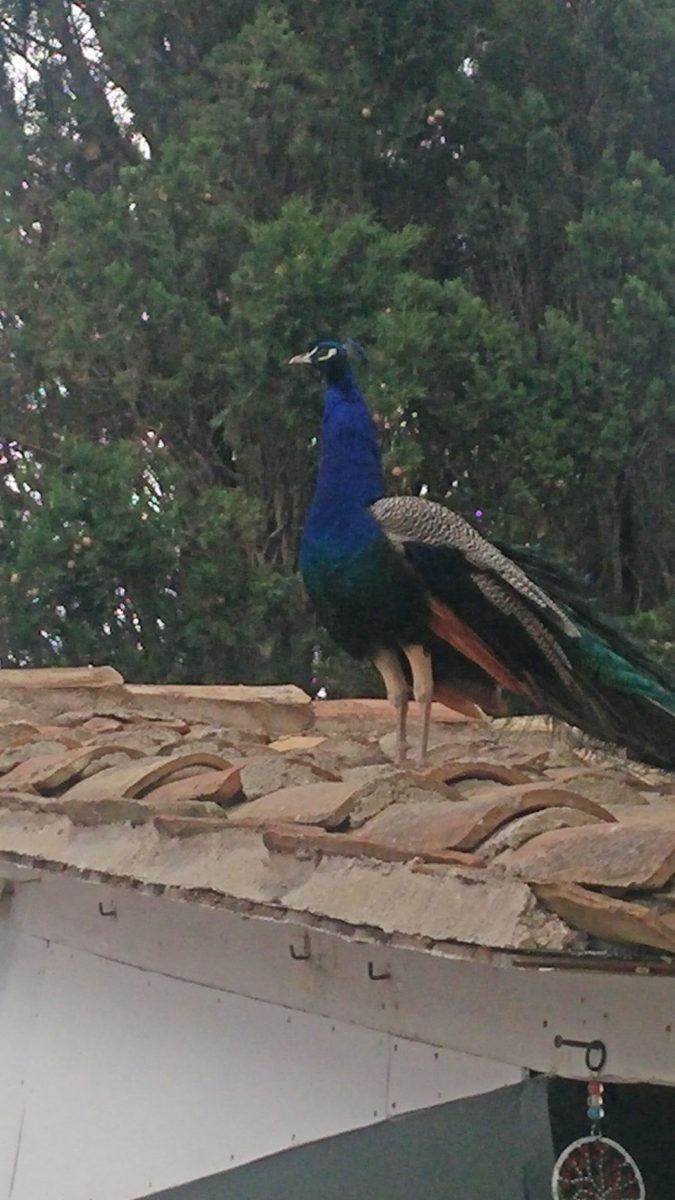 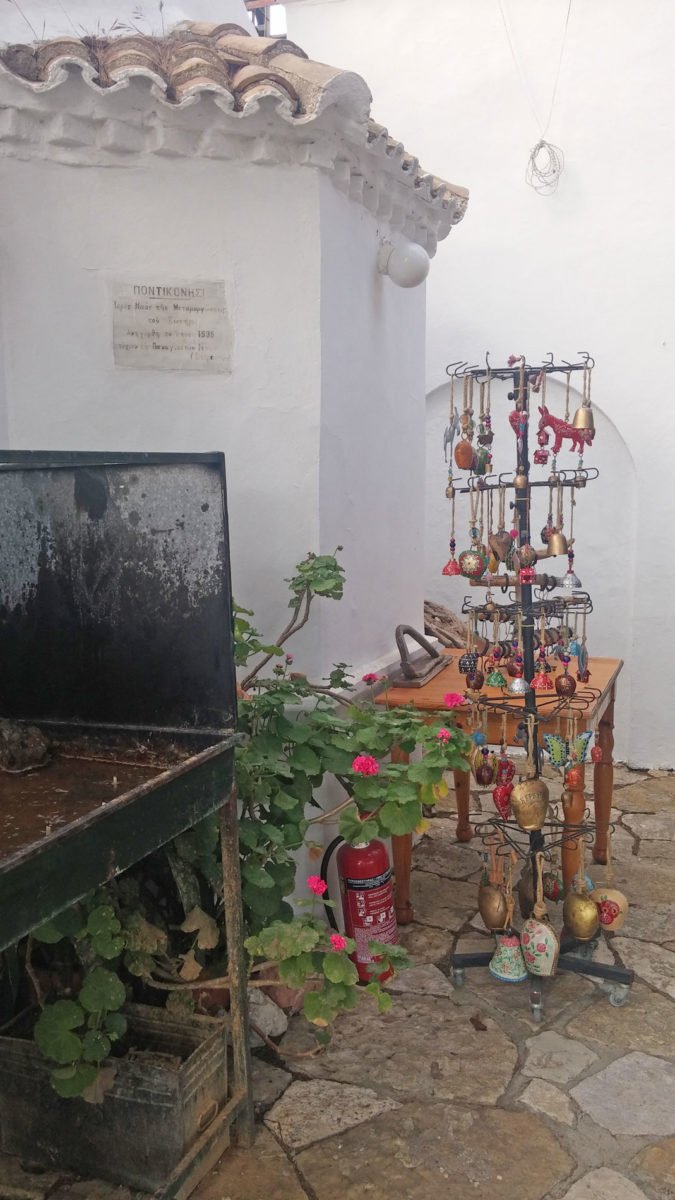 Pontikonisi: The stone ship of Odysseus

And favourite island of Princess Sisi

Pontikonisi (Mouse Island). A small islet off Corfu, whose strange shape, according to some people, may have given it its name. The accompanying legend mentions that when the angry Poseidon set eyes on the boat given to Odysseus as a gift by the Phaiakes for his return to Ithaca, he, the god, touched it with his trident and with his divine powers transformed it into a rock.

The truth about the islet’s name is lost in the mists of time, with some islanders arguing that it could also have been “christened” that way by the handful of monks from the Pontus who once lived there.

Whatever the case may be, Pontikonisi is considered to be Corfu’s trademark. It is situated at the entrance of the ancient harbour of Hyllaikos, in today’s Chalikiopoulos lagoon and is less than half a mile away from the mainland of Corfu.

Pontikonisi’s only permanent inhabitant is “Kaiser”, a gorgeous peacock which is able to enjoy the island’s incomparable beauty all year round.

Kaiser was brought to the island in 2008 by Giorgos Bouzanidis one of the boatmen who takes tourists to and from the islet on day trips. “Pontikonisi was the favourite island of the unhappy Princess Sisi who came here every Sunday to pray. The steps leading to the chapel built on a rock, were in fact made by her workmen” says Mr. Bozanidis to the Athens and Macedonian News Agency, gradually revealing the islet’s modern history.

“Pontikonisi has been as it is today since 1960, as there were once many little houses all around, belonging to the monks who lived on the island till 1915-1916. When the monks left, the houses fell down. Old photographs of the island prove this”, Mr. Bozanidis points out.

The island is verdant with tall cypress trees. The Byzantine chapel of the Pantokrator, dedicated to the Transfiguration of the Saviour, was built in 1535. Even today, commemorative plaques are kept in the chapel of the frequent visits by the Empress Elizabeth of Austria and the Archduke Rudolf.

The island has had thousands of visitors, counting many famous ones among them. None of the boatmen remembers when tourism started on Pontikonisi. They do however confirm that taking visitors to and from the island was done with sailing and even rowing boats. The job of boatman who takes tourists across on his caique with a return fare of just two and a half Euros seems to have been passed down from father to son.

Today, access to the Lilliputian island is much easier, since the small caiques come and go nonstop from morning to sun down, starting out from the foot bridge of Vlachernes. In the summer months, over 100-150 tourists visit it daily. Most of them are Greek.

Time and again, Pontikonisi has been a source of inspiration for many great painters and has been sung about countless times by Greek and foreign artists alike. All the same, it seems to conceal many secrets, prayers and promises of love given in the small wooden café overlooking the blue Ionian sea and oaths of fidelity exchanged in front of the Byzantine chapel where almost every week end, young couples are joined in marriage.

The boatmen complain that the tourist agents of Corfu do not include this trip in their itinerary, which also is pointed out to the Athens and Macedonian News Agency by Vasilis Kaloudis, president of the Corfu Tourist Agents, referring to the great efforts being made on their behalf for this  situation to change.

Either way, whether one visits Pontikonisi or not, one can enjoy it from the coastal road of Mesi Kerkyra, or from the Canoni, but also from the window of an airplane as it approaches Corfu, so as to get a first taste of the beautiful island of the Phaiakes.