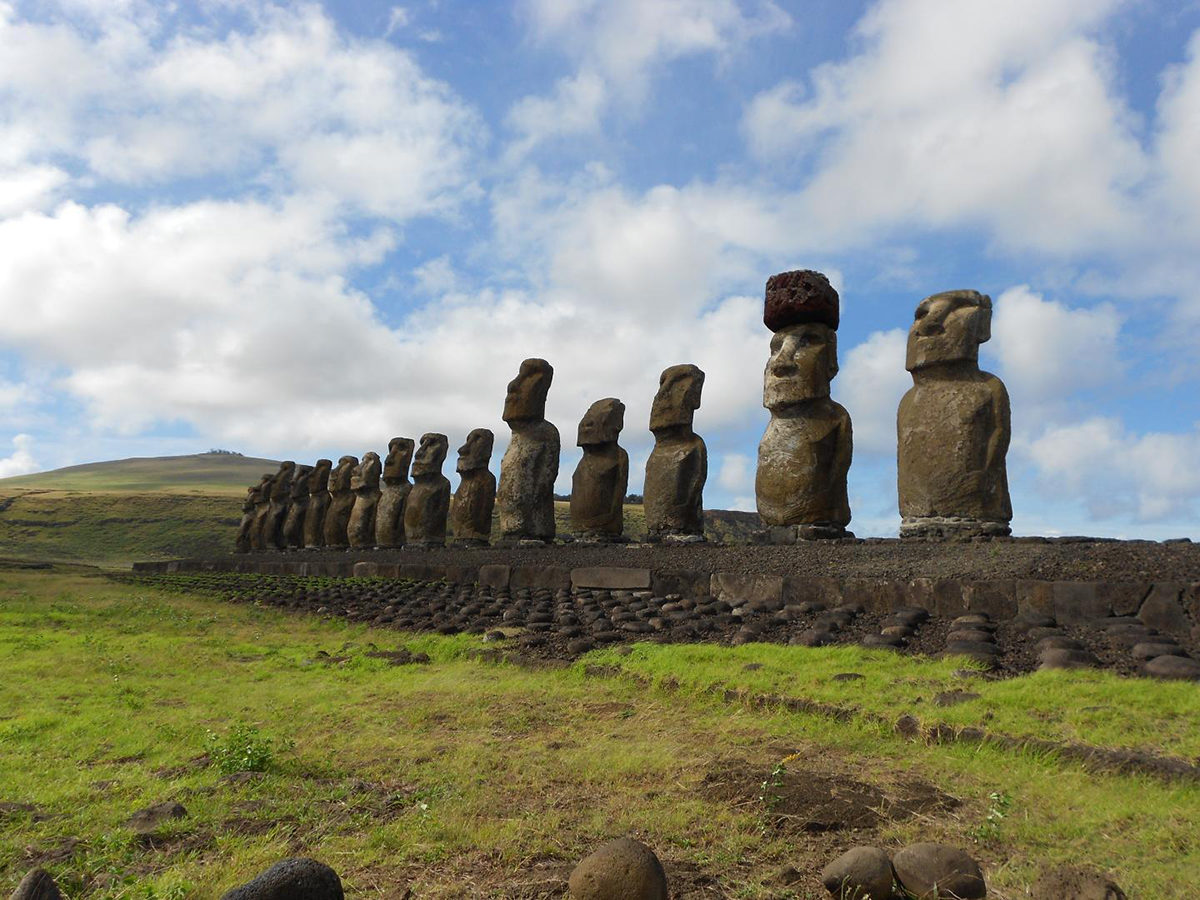 The ancient people of Easter Island, or Rapa Nui, were able to move massive stone hats and place them on top of statues with little effort and resources, using a parbuckling technique, according to new research from a collaboration that included investigators from Binghamton University, State University at New York.

“Of the many questions that surround the island’s past, two tend to stand out: How did people of the past move such massive statues (moai) and how did they place such massive stone hats (pukao) on top of their heads?” said Carl Lipo, a professor of anthropology at Binghamton University.

Pukao are cylinders made of red scoria, some of which weigh up to 12 metric tons. They were moved all around the island, across long distances, with few people and resources.

“We’ve learned they moved the statues in a walking fashion using simple, physics-based processes, in a way that was elegant and remarkably effective,” said Lipo. “Our latest study now tackles the issue of the hats (pukao). These multi-ton stone objects were carved at a separate quarry, transported across the island and somehow raised to the top of the heads of the statues.”

The team took photos of different pukao and used them to generate three-dimensional models that document details that are important for identifying the most likely method of pukao transport.

“The number of possible pukao emplacement methods is limited only by the human imagination,” says Sean Hixon, lead author and current graduate student at Penn State University. “Examples of past ideas for pukao transport include sliding the pukao up a wooden ramp or gradually building a pile of stones beneath the pukao. The challenge is to move beyond merely possible transport methods and to identify a transport scenario that is consistent with variation in the archaeological record.”

“We expect that part of the shapes of pukao will reflect the physical constraints associated with transport” explains Hixon. “Different possible transport methods constrain aspects of pukao variability in different ways.”

Lipo continues, “The answer, like that of our findings with the moai, show that Rapa Nui people were remarkably ingenious and found solutions that required the fewest resources and smallest effort to achieve their goals.”

Their analysis showed that the pukao were most likely rolled from the quarry to the location of the moai, and rolled up large ramps using a parbuckling technique.

“In parbuckling, a line would have been wrapped around the pukao cylinder, and then people would have pulled the rope from the top of the platform,” said Lipo. “This approach minimizes the effort needed to roll the statue up the ramp. Like the way in which the statues were transported, parbuckling was a simple and elegant solution that required minimum resources and effort.”

Lipo also said that this use of resources shows how efficiently the people of Easter Island used their resources, which contrasts with what was previously thought.

“Easter Island is often treated as a place where prehistoric people acted irrationally, and that this behavior led to a catastrophic ecological collapse,” said Lipo. “The archaeological evidence, however, shows us that this picture is deeply flawed and badly misrepresents what people did on the island, and how they were able to succeed on a tiny and remote place for over 500 years.”

Lipo said he plans to continue researching the Rapa Nui people, and their relationship with their environment and community.

“Our analysis of pukao adds significantly to this new understanding of the island: Rapa Nui people made remarkable achievements through their ingenuity,” said Lipo. “These efforts were embedded in a sustainable social system in which monument construction (such as the pukao) played a vital role. While the social systems of Rapa Nui do not look much like the way our contemporary society functions, these were quite sophisticated people who were well-tuned to the requirements of living on this island and used their resources wisely to maximize their achievements and provide long-term stability.”