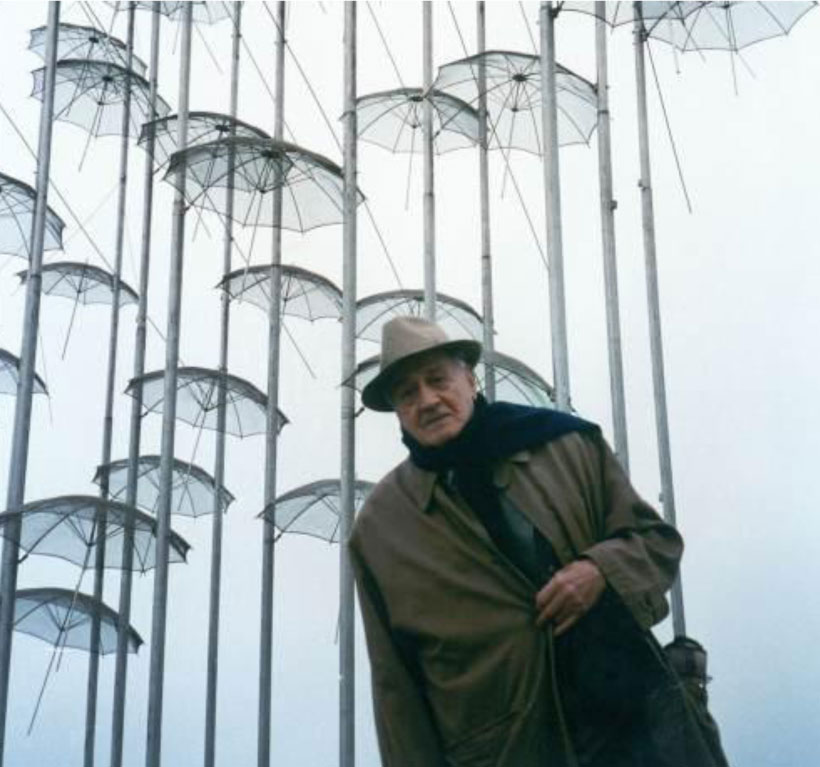 The Zongolopoulos “Umbrellas” in Egypt

On a beach outside Alexandria

On a beach outside Alexandria in the Marassi district stand the famous sculpted “Umbrellas” by George Zongolopoulos; transparent, light and vibrant, in a constant “dialogue” with their new surroundings under the Egyptian sun, on the endless beach by the sea.

The installation of the 13-metre high, stainless steel sculpture was successfully completed in early June and its night illumination will shortly be ready. The setting up of the sculpture was done under particularly difficult conditions due to extremely high temperatures and the sandy terrain, with the help of a large crane and boom lift that got stuck in the sand making it impossible to access the perimeter of the sculpture.

As head of the George Zongolopoulos Foundation Nikos Theodorides explains to the Athens and Macedonian News Agency, “The work was bought by EMAAR Properties belonging to Mohamed Alabbar from Dubai who is making a huge investment of 30,000 residences, which include a Greek village replica of Santorini, golf courses and piers in an area of 9 kms along the coast. The ‘Umbrellas’ were placed in a prominent place in front of the Al Alamein hotel that was bought and renovated by EMAAR. Nasser’s country house is in this district and so is that of the current Egyptian President”.

How did the property developing company from Dubai find the George Zongolopoulos Foundation? “By chance, from a publication of the work in a magazine, we were found by an art consultancy company based in Cyprus which collaborates with EMAAR” explains Nikos Theodorides to the AMNA.

The man in charge of the sculpture’s construction was Stelios Ghikas and it was carried out in the work shop of his father Leonidas Ghikas, George Zongolopoulos’ main technician and collaborator of 40 years who had also worked with the sculptor on the “Umbrellas” that are in Thessaloniki. Stelios Ghikas now in charge of the studio, undertook the demanding construction of the sculpture that was realized in Athens and then sent to Egypt.

A concrete base had to be constructed for its installation, measuring 9m long, 5m wide and 0.50m thick. The statics study for the base and the study for the sculpture’s durability (cross section of the materials, study of its torsional strength and wind pressure) were offered by the office of Zongopoulos’ Civil Engineer and collaborator Dimitris Bairaktaris.

George Zongolopoulos had shown his sculptures in Egypt in 1946, participating in the International Exhibition of Cairo. His work “Umbrellas” had been enthusiastically received on their first showing in 1995 on a floating platform at the entrance of the Venice Biennale. Their variations have been installed in Brussels, in the building of the Council of Ministers of the European Union, at the entrance of Palaio Psychiko and of course in Thessaloniki since 1997, becoming the city’s landmark, especially after being placed on its seafront in 20013.