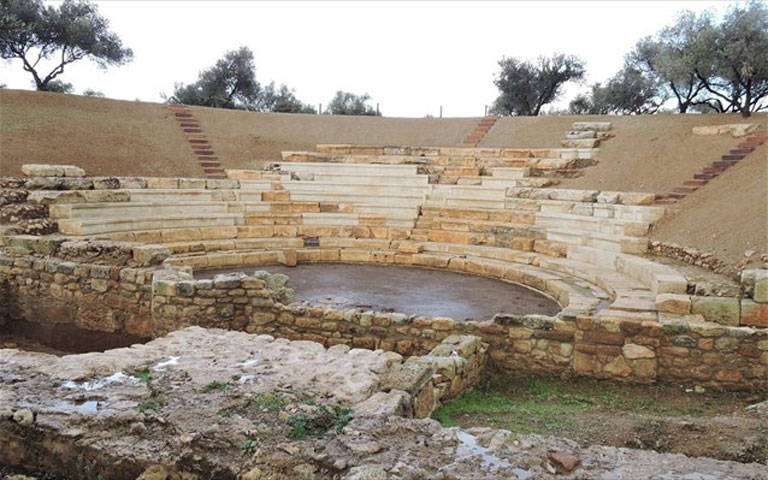 It makes up a separate part of the archaeological site of Ancient Aptera which is situated on a hill in the Megala Chorafia region with a view of the bay of Souda and the Lefka Ori (White Mountains).

It is Crete’s only restored ancient theatre which “came to life” again after 17 centuries of silence with an unusual performance of a rhapsody from the Odyssey.

The ancient theatre that was unearthed in its entirety by the archaeological excavation and intensive work conducted from 2012 to November 2015 is a cultural land mark and a site that attracts a considerable number of visitors.

Today the ancient theatre seats about 350 spectators. As head of the Ephorate of Antiquities of Chania, archaeologist Eleni Papadopoulou says to the Athens and Macedonian News Agency/AMNA, “the total unearthing of the monument, its conservation and restoration were made possible by its being included in the Third Community Support Framework of the Region of Crete and subsequently in the NSRF 2007-2013 with funding of 2,440,000 Euros in the last phase”.

In her note Mrs. Papadopoulou describes the theatre’s history, pointing out that “its most ancient phase has been identified as the Early Hellenistic period (3rd century BC) with major alterations occurring during the Roman period. In the early 20th century a large part of the theatre was destroyed by the creation of a limekiln in the middle of the theatre koilon, which used seats and architectural members as fuel. In the post war period the theatre was further torn down when its stone plinths were used in constructing the port of Souda.

“With the monument’s total unearthing, its shape and geometry were revealed in their entirety and a complete route for the visitor was secured.

“In December 2015, the only, to date, excavated and restored ancient theatre in Crete became available to the public, the objective being to use it in events and activities worthy of its cultural history. In this spirit, a musical event took place in August 2017 with cellist, composer and Cretan lyra player Yiorgos Kaloudis.

“This year, after centuries of ‘silence’ at Aptera, in collaboration with the Region of Crete we organized the first theatre performance of the dramatized narration of a rhapsody from the Odyssey”.

As Mrs. Papadopoulou says “our aim is for the ancient theatre of Aptera to become a cultural driving force and contribute to the spiritual and aesthetic education of today’s citizens from around the world”. According to the an information leaflet by the Ministry for Culture and the Ephorate of Antiquities of Chania, the ancient theatre of Aptera was built entirely of local limestone and a natural depression in the terrain was used as its location which faces south with a view of the Lefka Ori.

The theatre’s earliest phase dates from Hellenistic times and the Roman era. It was made up of a) the koilon, i.e. the space surrounding the orchestra where the audience was seated, b) the orchestra, i.e. the space where the chorus of actors danced and sang and c) the scene/stage where the dramatic action took place. To the east and west were the parodoi, i.e. the two entrances for audience and actors , and a paved path leading to the theatre. The main building phases of the Aptera theatre are Hellenistic, Roman A and Roman B.