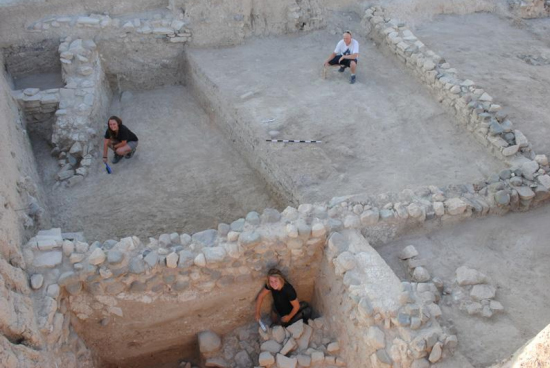 Politiko-Troullias: An archaeological window on the farming and mining communities

The Department of Antiquities, Ministry of Transport, Communications and Works, announces the completion of the 2018 archaeological investigations at the Bronze Age (ca. 2100-1850 B.C.) site of Politiko-Troullia, conducted under the direction of Dr. Steven Falconer and Dr. Patricia Fall, University of North Carolina Charlotte, USA. Politiko-Troullia is situated approximately 25 km southwest of Nicosia, near Ayios Irakleidios Monastery, in the copper-bearing foothills of the Troodos Mountains. Bronze Age Politiko-Troullia seems to have been the predecessor of ancient Tamassos, the seat of a centrally important kingdom during the subsequent Iron Age.

The 2018 archaeological investigations featured expanded analysis of archaeological evidence excavated and surveyed between 2004 and 2017. Recent research has revealed extensive evidence of several fascinating features of Bronze Age life in the Troodos hinterland: 1) The remains of deer carcasses indicate large-scale community feasting at Politiko-Troullia on Mesopotamian fallow deer, which were hunted in the nearby oak/pine woodlands. 2) The villagers of Politiko-Troullia mined local copper deposits, and conducted household copper metallurgy, including smelting and casting a variety of copper and bronze tools (e.g., blades, chisels and axe-heads). The settlement was likely abandoned due to substantial erosion (possibly fueled by heavy rains) and the lowering of neighboring Kamaras Creek, after which the village well and water source dried up.

The results from Politiko-Troullia open an archaeological window on the farming and mining communities that provided the foundation for urbanised civilization on Cyprus. The excavators are particularly grateful for the collegial support of the Department of Antiquities, Cyprus, collaboration with the Cyprus American Archaeological Research Institute (Lefkosia), and for the kind encouragement and friendship offered to the project by the community of Pera Orinis, most especially by mayor Theodosia Mau Partasi, former mayor Costas Miliotis, Mr. Ioannis Demetriades, and other friends and colleagues in the Pera community.