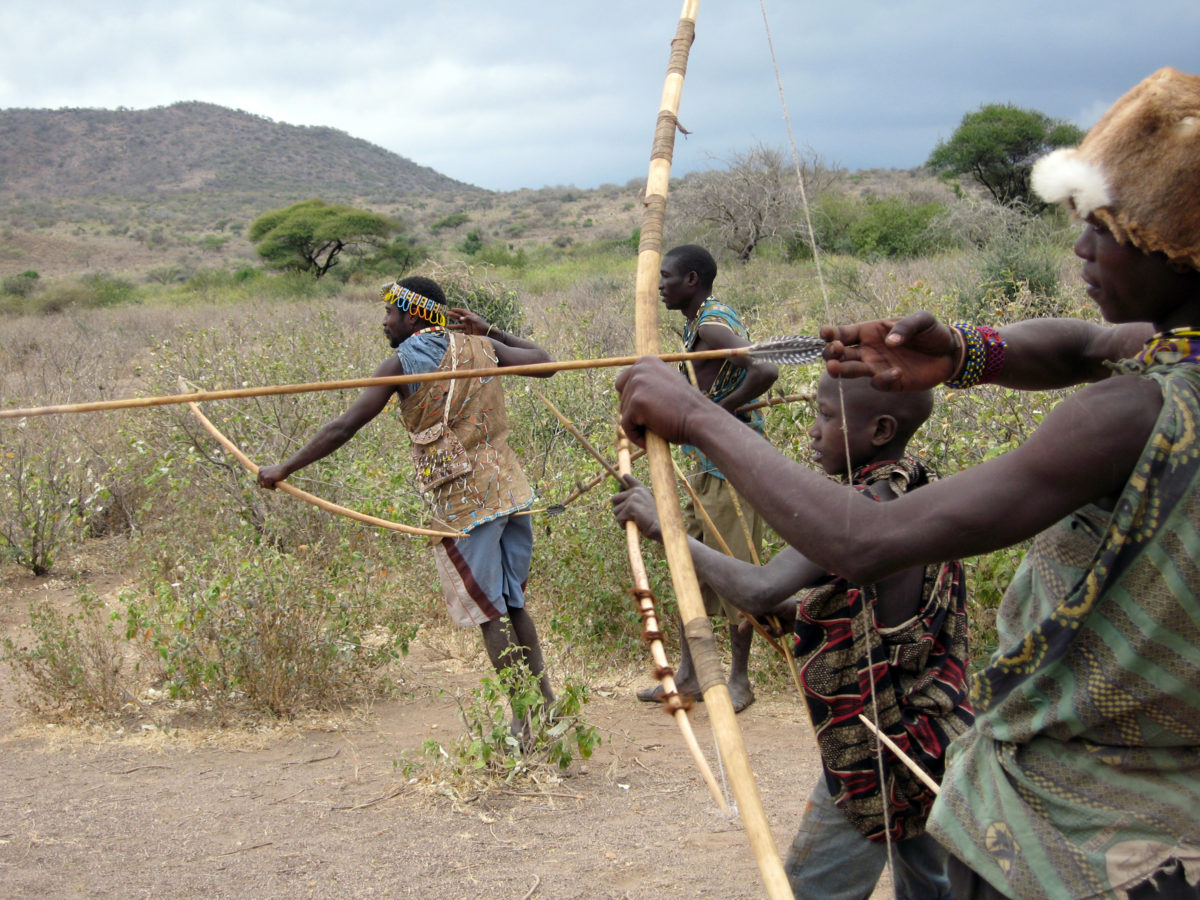 Nomadic hunter-gatherers show that cooperation is flexible, not fixed

In the realm of evolutionary biology and survival of the fittest, cooperation is a risky business. Yet humans do it on a scope and a scale unmatched by any group in the animal world.

“We engage in costly acts to help others,” says University of Pennsylvania psychologist Coren Apicella. “Figuring out how humans became a cooperative species is often called one of science’s great puzzles. One solution is to ensure that cooperators only interact with other cooperators, so they can benefit from that trait and not be taken advantage of by cheaters.”

Apicella and doctoral candidates Kristopher Smith and Tomás Larroucau conducted research with the Hadza people of Tanzania, one of the last remaining nomadic hunter-gatherer populations. The six years of work shows that, year after year, cooperators live with other cooperators—results remarkable in light of Hadza residence patterns. Their group settings, called camps, change every six to eight weeks, meaning individuals reside with different people each year.

One of the work’s goals was to clarify how hunter-gatherers, known for their fluid living arrangements, maintain this pattern, according to Apicella, an assistant professor of Psychology in the School of Arts and Sciences. In one theory, people are consistently either cooperative or selfish; individuals gravitate toward those who behave similarly to themselves, what’s known as homophily.

The researchers discovered that this wasn’t case, however. A person’s level of cooperation in a past year did not predict her level of cooperation in a future year. Instead, a person’s propensity to cooperate depended largely on how much her new camp shared as a whole. The findings, which appeared in the journal Current Biology, highlight humans’ capacity to adapt to different social environments.

“There’s a whole lot to be optimistic about here,” Apicella says. “People are changeable. We’re not permanently altered by our experiences at a single point in time. We’re flexible and largely in sync with the people around us.”

Data collected from visits to 56 camps between 2010 and 2016 lead to a greater understanding of this facet of human biology. Nearly 400 Hadza adults of all ages participated in the work with the Penn psychologists, playing what’s called a public goods game. It’s a tool often used in similar contexts to determine how much someone might contribute to the overall good of a group at a cost to herself.

In Western settings, the public goods game often includes money. Every participant receives a set dollar amount, say $10. Each $1 that they contribute to the public pot gets tripled, and the resulting amount gets evenly shared amongst everyone, regardless of individual contribution. Individuals keep the money they don’t donate.

“You can always do better by not contributing anything,” says Smith, a fifth-year psychology graduate student. “Economists predict that in this game, people should not contribute anything. But humans don’t always act in pure self-interest, and in fact, many do contribute to the public good.”

For the Hadza, a resource like honey–their favorite food–is more relevant than money. So Apicella and Smith played the game using the same general concept, but with straws filled with honey. Each participant started with four, and any they put toward the whole group got tripled; they knew ahead of time they could keep whatever they didn’t distribute.

“You have some camps in which everyone is contributing, and some where people are contributing very little,” Smith says. “In a random population, you’d expect all the camps to contribute similar amounts.”

Apicella interprets that behavior to mean that the Hadza choose to cooperate based on local camp norms. And, she speculates, that because sharing norms are so powerful, people are choosing campmates not based on their level of cooperation, but instead, on their ability to produce.

“Food that comes into camp is shared widely,” she says. “How cooperative people are will not matter as much as how much food they can obtain. Inept hunters or gatherers will not have food to share, regardless of how cooperative they might be.”

Broadly, these findings point to the importance of adapting to new local environments, as well as humans’ ability to do so quickly. For the Hazda, that equates to the ever-changing camps, but for Western populations, it could mean, for instance, starting a new job, marrying into a family, or sending a child to a new daycare.

“This has important implications for boosting cooperation in other settings, too,” Apicella says, “for policymakers, employers, school administration–really anyone interested in increasing teamwork among individual members.”

The findings are correlational, though they are consistent within and across years and control for many variables, including geography, age, sex, and number of children. In the future, Smith says they would like to conduct experimental work on cooperation, potentially replicating the frequently changing environments of the Hadza culture within a Western setting.

“If the hunter-gatherers are living with people who cooperate, they themselves cooperate,” Smith says. “The Hadza are changing camps every six to eight weeks. It might be that if people in Western populations had that sort of movement, that change in their social environment, then we’d see more adoption of local norms.”