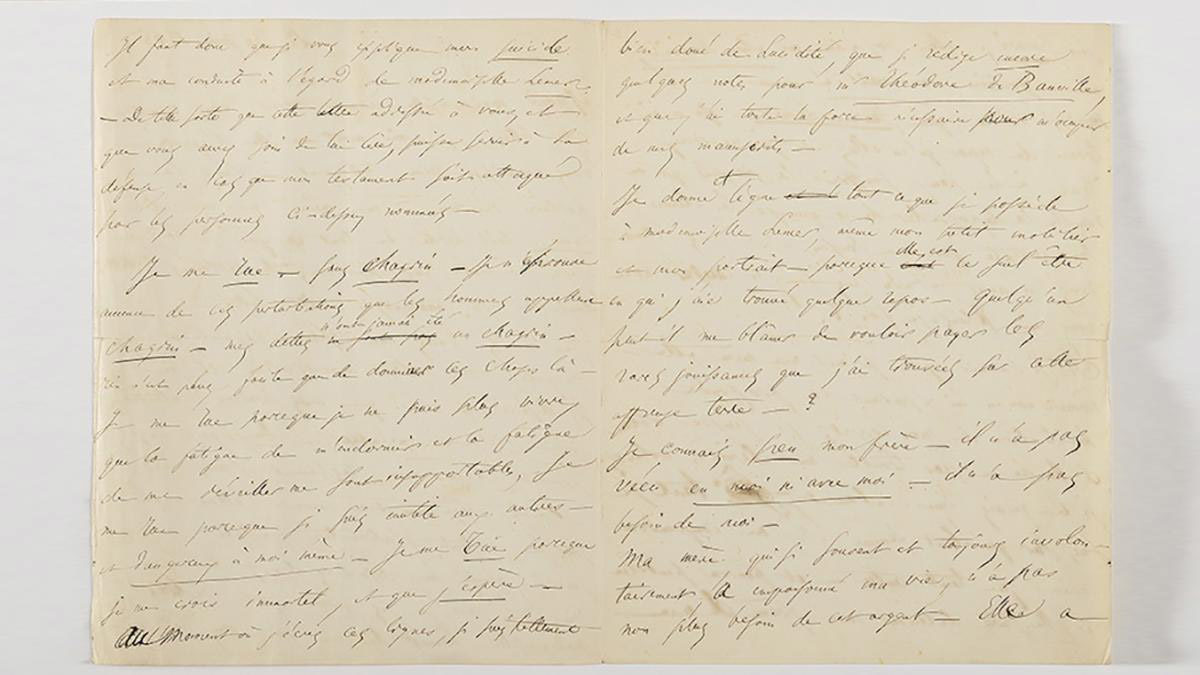 A letter by Baudelaire is being auctioned

In which he announced his intension to commit suicide

A moving letter by the young Charles Baudelaire in which he announced his intension to commit suicide, an attempt in 1845 he would survive, has been sold by the house of Osenat on Sunday along with other 34 letters by the author of “Les Fleurs du Mal”.

“When Mademoiselle Jeanne Lemer hands you this letter I shall be dead (…). A terrible agony is killing me (…). I’m killing myself because I can no longer live, because the fatigue of falling asleep and the fatigue of awakening are unbearable to me” writes the misunderstood poet who had conflicting relations with his family, addressing his mistress Jeanne Duval. He would try to end his life by stabbing himself, without his action however having serious consequences. He was 24 at the time and he was to live another 22 years.

This letter which is valued between €60,000 and 80,000 will be the highlight of the sale of the auction house that has its headquarters in Fontainebleau, southeast Paris. Other writings by Baudelaire where the “damned” poet reveals his intricate calligraphy will also be auctioned: the love poem “Les promesses d’un visage”, notes that question the harsh literary criticisms of “Les Fleurs du Mal/The Flowers of Evil”, writings in which he describes his happiness, his “black ideas”, his “rage”, his disgust with French politics and specifically with the regime of Napoleon III.

Included in this important auction are letters by Jules Barbey d’Aurevilly, Eugene Delacroix, Victor Hugo, Edouard Manet addressed to Baudelaire, which were also gathered in this exceptional collection of Baudelaire manuscripts. Many more 19th and 20th century authors give a picture of exciting correspondence on various literary and scientific debates of those times.

Thus, also being auctioned are proofs of the “Human Beast” by Emile Zola, the 17th novel in the famous Rougon-Macquart series, corrected by the author of social realism. Handwritten texts by Zola are very rare, most of them having been given to the National Library of France.

Also on sale at the Osenat auction house at Fontainebleau on Sunday are: two letters written by Marcel Proust to his mother and a photograph of 1896, scandalous in the eyes of the Proust family, which depicts Lucien Daudet, son of novelist Alphonse Daudet, gazing tenderly at the author of “In Search of Lost Time” and leaning on his shoulder, texts and letters by Hector Berlioz, Louis Ferdinand Celine, Sigmund Freud, Gustave Flaubert, Albert Einstein, Stephane Mallarme, Paul Verlaine, Jean Paul Sartre and several others.