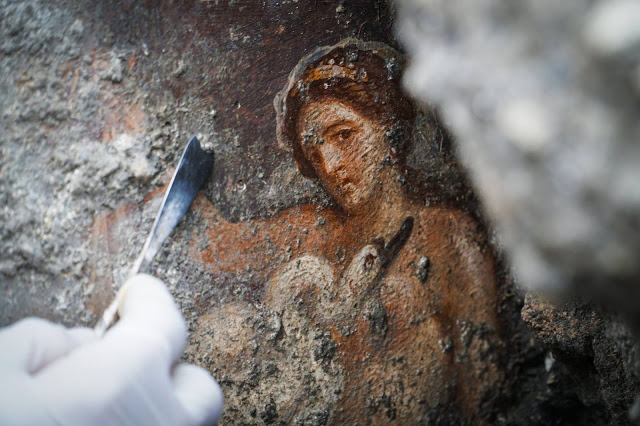 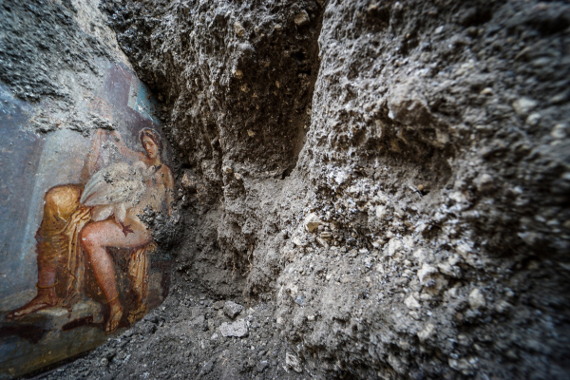 The fresco “Leda and the Swan”

It re-emerged in a room along Via del Vesuvio

The fresco re-emerges in a room along Via del Vesuvio, during re-profiling interventions on the Regio V excavation fronts.

Yet another female image resurfaces in the new Regio V excavations, and joins the other sophisticated female faces featured in the medallions of certain rooms along Via del Vesuvio, and in the image of Venus and Adonis from the House with the Garden, which have already been unearthed.

This time, we have the myth of Leda and the Swan depicted in a fresco, which was discovered during stabilisation and re-profiling works on the excavation fronts, in a cubiculum (bedroom) of a house along Via del Vesuvio. The room which contains the painting is located next to the entrance corridor, where the fresco of Priapus similar to that of the nearby House of the Vettii was found.

The scene—full of sensuality—depicts the union of Jupiter, transformed into a swan, and Leda, wife of King Tyndareus. From her embraces, first with Jupiter and then Tyndareus, would be born the twins Castor and Pollux from an egg (the Dioscuri), Helen—the future wife of King Menelaus of Sparta and cause of the Trojan War—and Clytemnestra, later bride (and assassin) of King Agamemnon of Argos and brother to Menelaus.

At Pompeii the episode of Jupiter and Leda enjoyed a certain measure of popularity, as evidenced in various domus, with varied iconography (the lady is generally depicted as standing, not seated as in the new fresco, and in certain cases she is not depicted in the moment of intercourse). Among the varied depictions we have are those in the Houses of the Citharode, of Venus in the Shell, of Queen Margherita, of Meleager, of the Coloured Capitals or Ariadne, of the Ancient Hunt, of Fabius Rufus, of the Fontana d’Amore, and perhaps also in the Houses of L. Rapinasius Optatus and of the Golden Cupids.

The myth of Leda and the Swan also appears in frescoes which have been detached from Herculaneum and Villa Arianna at Stabiae, which are today located at the National Archaeological Museum of Naples, and just to confirm the popularity of the subject, on a silver mirror from the Boscoreale Treasure, today displayed at the Louvre.