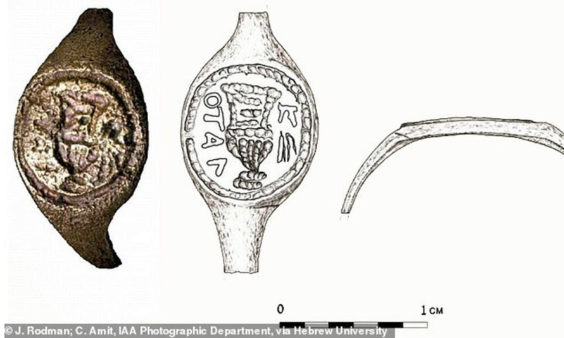 It bears an inscription in Greek

Has the ring of Pontius Pilate been found? It is possible, since, according to an article in the Israeli newspaper “Haaretz”, its inscription has been deciphered that is written in Greek and bears the name of the Roman prefect who sentenced Jesus Christ to death.

The ring had been discovered 50 years ago during excavations at the Herodion site near the West Bank of Bethlehem. According to the press release, it was found in the archaeological research carried out under Professor Gideon Foerster of the Hebrew University of Jerusalem just after the Six-Day War of 1968-1969, as part of the preparations for the site to open to visitors.

The bronze ring is one of the thousands of artefacts found at the time. The famous name was revealed recently, when after a thorough cleaning it was photographed with the use of a special camera in the laboratories of the Israel Antiquities Authority. The inscription on the ring which seems to have been a seal, includes the image of a wine vessel/krater around which Greek writing was recognized, translating as “Pilatus”.

Pontius Pilate was the 5th prefect of the Roman province of Judaea and probably the most important. He ruled from 26 to 36 AD although some say from 19 AD. According to the newspaper that quotes Professor Danny Schwartz, the name was rare in Israel of that time. “I know of nobody by this name from that period and the ring shows that it was a person with prestige and wealth,” he said to the Israeli newspaper.

The ring is plain, that is why the experts believe that it was used by the governor for his daily works or belonged to one of his officials, or to a member of his court who used it to sign with his name. According to “Haaretz”, there is another archaeological find in Israel bearing the name Pilate and which is also attributed to the famous Roman governor. In the 1960s moreover, Professor Foerster found a stone with this name carved on it.