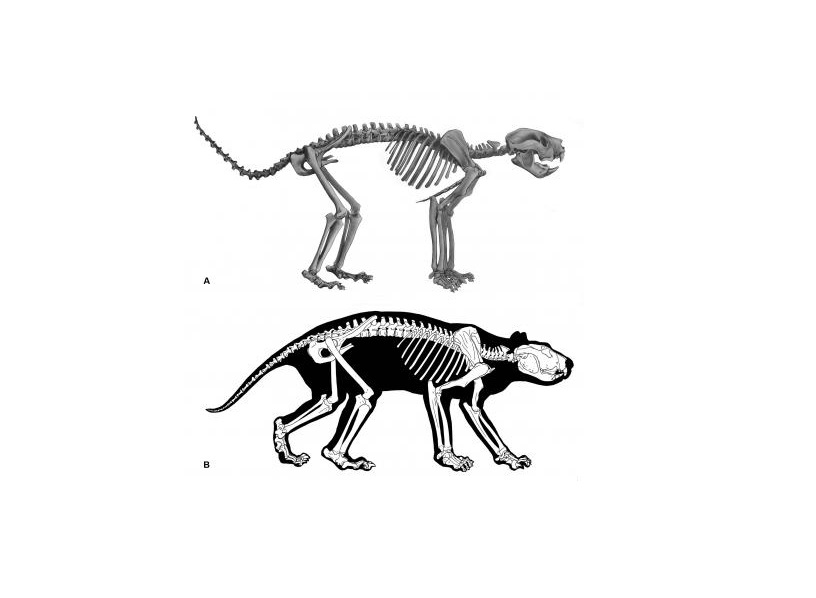 Thyalacoleo carnifex, the “marsupial lion” of Pleistocene Australia, was an adept hunter that got around with the help of a strong tail, according to a study released December 12, 2018 in the open-access journal PLOS ONE by Roderick T.

Wells of Flinders University and Aaron B. Camens of the South Australia Museum, Adelaide. These insights come after newly-discovered remains, including one nearly complete fossil specimen, allowed these researchers to reconstruct this animal’s entire skeleton for the first time.

A marsupial predator with an estimated weight of over 100kg, Thylacoleo was unlike any living animal, and paleontologists have long tried to interpret its lifestyle from incomplete remains. The new fossils, discovered in Komatsu Cave in Naracoorte and Flight Star Cave in the Nullarbor Plain, include the first known remains of the tail and collarbone of this animal. The authors used this new information to re-assess the biomechanics of Thylacoleo, and by comparing its anatomy to living marsupials, reach new conclusions about the biology and behavior of the “marsupial lion”.

The tail of Thylacoleo appears to have been stiff and heavily-muscled, probably allowing it to be used along with the hind limbs as a “tripod” to brace the body while freeing up the forelimbs for handling food or climbing, as many living marsupials do. The analysis suggests that Thylacoleo had a rigid lower back and powerful forelimbs anchored by strong collarbones, likely making it poorly suited for chasing prey, but well-adapted for ambush hunting and/or scavenging.

These features also add to a list of evidence that Thylacoleo was an adept climber, perhaps of trees or steep-walled caverns. Among living marsupials, the anatomy of Thylacoleo appears most similar to the Tasmanian devil, a small carnivore that exhibits many of these inferred behaviors.

The authors add: “The extinct marsupial lion, Thylacoleo carnifex has intrigued scientists since it was first described in 1859 from skull and jaw fragments collected at Lake Colongulac in Victoria Australia and sent to Sir Richard Owen at the British Museum.

Although Australia’s largest marsupial carnivore it retains many features indicative of its diprotodont herbivore ancestry and its niche has been a matter of considerable debate for more than 150yrs. Recent cave finds have for the first time enabled a description and reconstruction of the complete skeleton including the hitherto unrecognised tail and clavicles.

In this study, Wells and Camens compare the Thylacoleo skeleton with those of range of extant Australian arboreal and terrestrial marsupials in which behaviour and locomotion is well documented.

They conclude that the nearest structural and functional analogue to Thylacoleo is to be found in the unrelated and much smaller Tasmanian Devil, Sarcophilus harrisii, a scavenger /hunter. They draw attention to the prevalence of all age classes within individual cave deposits as suggestive of a high degree of sociality. Those ancestral features Thylacoleo shares with arboreal forms are equally well suited to climbing or grasping a prey. They conclude that Thylacoleo is a scavenger, ambush predator of large prey.”