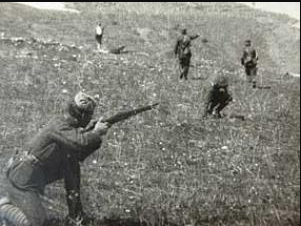 Greek Diplomacy, Film Reporting and the Balkan Wars of 1912-1913

In 1913 the Greek government commissioned multiple actuality films as a way to strengthen its position in the diplomatic negotiations for the settlement of the Balkan Wars. One of these films was With the Greeks in the Firing Line (62’), a copy of which was found in the US and restored in 2013.

Its discovery overturns the chronology of the long-form documentary war film, dating its origins to the Balkan Wars instead of WWI. Τhe restored With the Greeks along with another of the Greek-commissioned Balkan War actuality films will be screened on Feb. 5, 2019 at 7.00pm in Cotsen Hall on the grounds of the Gennadius Library, ASCSA. Vassiliki Tsitsopoulou (Modern Greek Program, University of Indiana) will introduce the films.

Dr. Tsitsopoulou will also provide running commentary during the screening, covering issues such as: What and who is pictured in these films and why? Who made them? Who owns them? Do the films constitute historical evidence and of what? As archival media objects, how should they be exhibited today? Where does With the Greeks in the Firing Line fit in the history of media war spectacle and propaganda? How is it that the prints used in the restoration were found in San Francisco CA? What is a film restoration anyway?

Vassiliki Tsitsopoulou (Ph.D. Cinema and Comparative Literature, University of Iowa) is an adjunct lecturer in Modern Greek at the University of Indiana, Bloomington. She has taught courses in modern Greek cinema and culture at the University of Notre Dame, Brown University, and the University of Illinois. Her current research focuses on early and pre-sound cinema in Greece and on the representation of the Ottoman Empire and (Ottoman) Greeks in international early and pre-sound cinema. Dr. Tsitsopoulou enjoys cross-archival research that combines film and non-film archival sources as a way to foster public engagement with history and culture. She has presented her research at the meetings of the International Society for the Study of Early Cinema (Domitor) and has conducted film restoration research for Tainiothiki tis Elladas (Greek Film Archive).