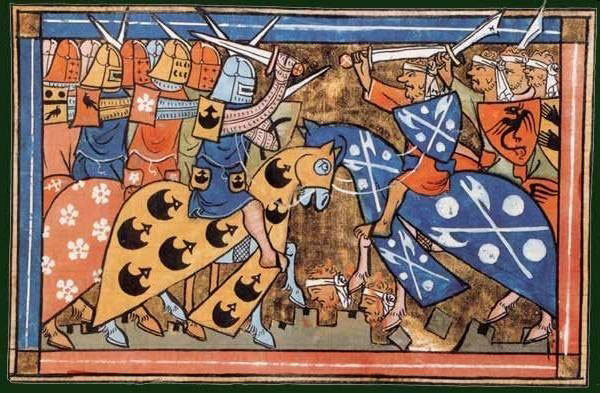 The first genetic study of ancient human remains believed to be Crusaders confirms that warriors travelled from western Europe to the near East, where they mixed and had families with local people, and died together in battle. Researchers from the Wellcome Sanger Institute and their collaborators analysed ancient DNA extracted from nine skeletons dating back to the 13th century, which were discovered in a burial pit in Sidon, Lebanon.

The results, published on April 18 in the American Journal of Human Genetics, confirm that while the Crusaders mixed with local people and recruited them to their cause, their genetic presence in the region was short-lived.

The Crusades were a series of religious wars fought between 1095 and 1291, in which Christian invaders tried to claim the near East. It’s known that nobility led the Crusades, but historical records lack details of the ordinary soldiers who travelled to, lived and died in the near East.

In recent years, archaeologists uncovered 25 skeletons dating back to the 13th century within a burial pit in Sidon, Lebanon. All of those found in the pit were male and had been violently killed during battle, as seen by the blunt force injuries to their skulls and other bones. Their bodies had been disposed of in the pit and burned.

Nearby, an isolated skull was found. The head may have been used as a projectile that was catapulted into the opposition’s camp to spread disease and slash morale, illustrating the brutality of the battles.

Clues found alongside the skeletons in the pit, such as European shoe buckles, a coin and carbon-14 dating analysis, led archaeologists to believe the human remains were Crusaders.

In a new study, researchers at the Wellcome Sanger Institute produced whole-genome sequences of the ancient skeletons’ DNA and confirm they were in fact Crusaders.

The team report that three individuals were Europeans of diverse origins, including Spain and Sardinia, four were near Easterners who had been recruited to the fight, and two individuals had mixed genetic ancestry, suggesting they were the descendants of mixed relationships between Crusaders and near Easterners.

Dr Chris Tyler-Smith, from the Wellcome Sanger Institute, said: “Historical documents tell us the names of the nobility who led the Crusades, but the identities of the soldiers remained a mystery. Genomics gives an unprecedented view of the past and shows the Crusaders originated from western Europe and recruited local people of the near East to join them in battle. The Crusaders and near Easterners lived, fought and died side by side.”

However, the researchers believe the Crusaders’ influence in the region was short-lived as European genetic traces are insignificant in people living in Lebanon today.

When the researchers sequenced the DNA of people living in Lebanon 2,000 years ago during the Roman period, long before the Crusades, they found that today’s Lebanese population is genetically similar to the Roman Lebanese, suggesting the Crusades had no lasting impact on Lebanese genetics.

Dr Marc Haber, from the Wellcome Sanger Institute, said: “The Crusaders travelled to the near East and had relationships with the local people, with their sons later joining to fight their cause. However, after the fighting had finished, the mixed generation married into the local population and the genetic traces of the Crusaders were quickly lost.”

In the study, the team worked with archaeologists at the Sidon Excavation site to transfer bones of the nine skeletons from Lebanon to a laboratory in Cambridge dedicated to ancient DNA. Here, small portions of the surviving 800 year-old DNA were extracted from the temporal bone in the skulls by DNA extraction experts. An ultra-sterile working environment was set up by the scientists to prevent contamination of the samples with their own DNA, which would render them useless.

The ancient DNA samples were particularly difficult to extract and sequence as the bodies had been burned and buried in a warm and humid climate, where DNA degrades quickly. Recent advances in DNA extraction and sequencing technology made studying the ancient and damaged DNA possible.

Dr Claude Doumet-Serhal, Director of the Sidon excavation site in Lebanon, said: “I was thrilled to discover the genetic identities of the people who lived in the near East during the Crusades. Only five years ago, studies like this would not have been possible. The uniting of archaeologists and geneticists creates an incredible opportunity to interpret significant events throughout history.”