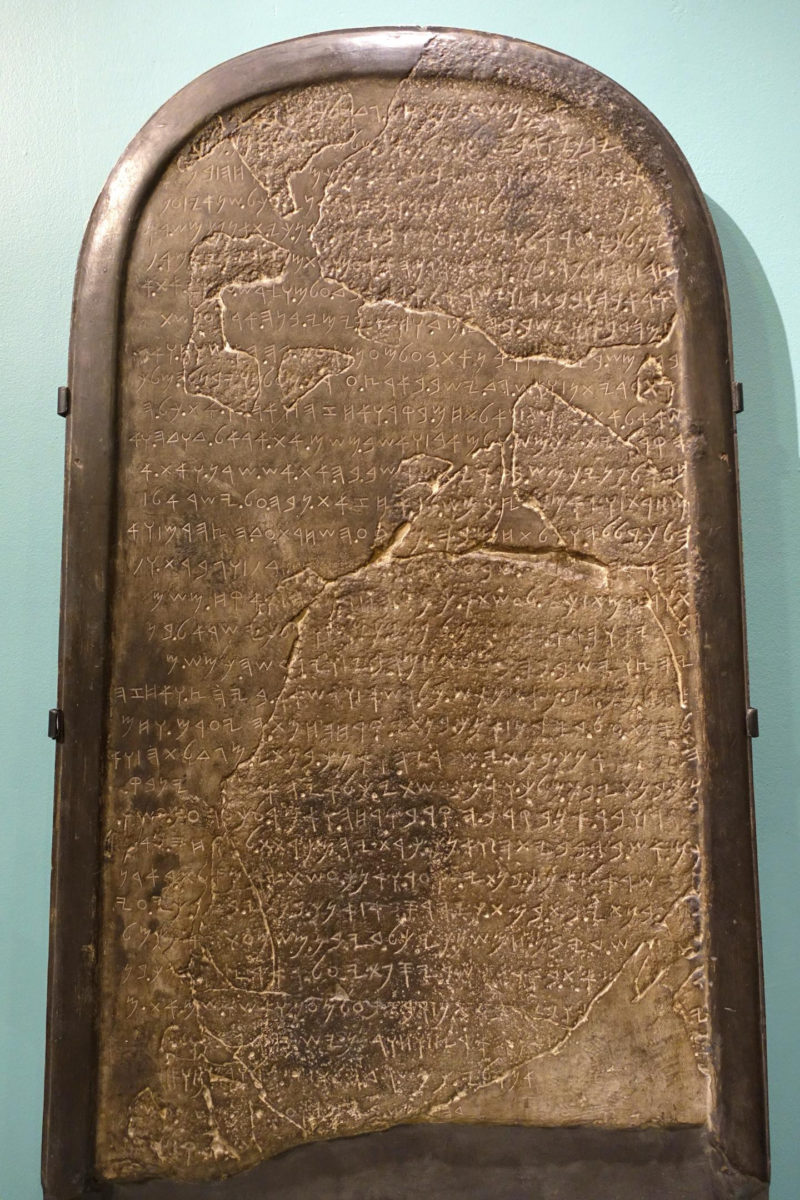 The legendary King Balak from the Book of Numbers may have been a real historical figure, according to a new reading of the Mesha Stele, the longest extra-biblical inscription in existence.

The Mesha Stele, an ancient inscribed stone dating to the 9th century BCE, tells the story of the territorial expansion and construction endeavors of King Mesha of Moab, who is also mentioned in the Second Book of Kings in the Old Testament. The stele was found in the 19th century among the ruins of the ancient town of Dibon in Moab, located in today’s Jordan, east of the Dead Sea. The stele is on display at the Louvre Museum.

According to the study, a word on Line 31 of the stele that has until now been interpreted as “House of David” in fact refers to King “Balak,” who is known as a Moab ruler only from the Book of Numbers.

A recent exhibit, Mésha et la Bible, held in October 2018 at the Collège de France in Paris in conjunction with the Louvre Museum, showcased the Meshe Stele “squeeze,” a reverse copy of the inscription on paper. This exhibition afforded researchers the unique opportunity to take high-resolution photographs of the squeeze.

Although the stele had been cracked in the 19th century, the parts that went missing were preserved in the squeeze, which was made before the stone broke into pieces.

The authors of the new research studied new high-resolution photographs of the squeeze and of the stele itself. These new images made it clear that there are three consonants in the name of the monarch mentioned in Line 31, and that the first is the Hebrew letter bet, which corresponds to the English letter “B.”

The most likely candidate for the monarch’s name is “Balak.” The seat of the king referred to in Line 31 was “Horonaim,” which is mentioned four times in the Bible in relation to the Moabite territory south of the Arnon River.

“We believe Balak was a historical figure like Balaam, who, before the discovery of the famous Deir Alla inscription in Jordan in 1967, was considered an ‘invented’ character,” explains Prof. Finkelstein. “The new photographs of the Mesha Stele and the squeeze indicate that the reading ‘House of David’ — accepted by many scholars for more than two decades — is no longer valid.”

In 1994 the French epigrapher André Lemaire suggested that letters missing in Line 31 of the stele would spell “House of David,” as in the Tel Dan Stele, which features the term in reference to the Kingdom of Judah. Accordingly, Lemaire proposed that in the mid-9th century Judah ruled in southern Moab, east of the Dead Sea.

“With due caution, we suggest that the line refers to the Moabite King Balak, who, according to the Balaam story in Numbers 22-24, was supposed to bring a divine curse on the people of Israel,” Prof. Na’aman says.

“The biblical story was written down later than the time of the Moabite king referred to in the Mesha Stele,” Prof. Römer adds. “But to proffer a sense of authenticity to his story, its author must have integrated into the plot certain elements borrowed from ancient reality, including the names Balaam and Balak.”