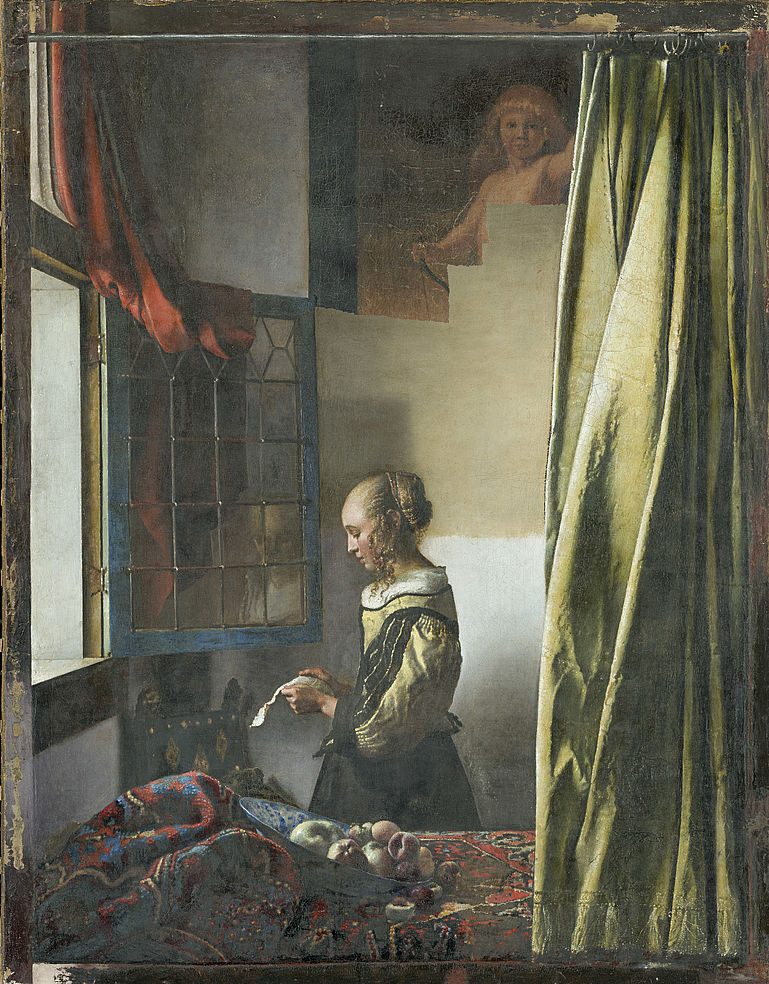 A “new” Vermeer in Dresden

For more than 250 years now, the famous painting by Johannes Vermeer featuring a profile depiction of a girl intently reading a letter in front of a light-coloured empty wall has held a firm place among the masterpieces in the Dresden Gemäldegalerie. This picture, which dates to around 1657/59, is regarded as one of the earliest interior paintings by Vermeer with a solitary figure. Previous x-ray examinations indicated that a picture of a naked Cupid in the painting had been overpainted. Today, new laboratory tests have conclusively determined that the overpainting was not by Vermeer’s hand. On this basis, the Gemäldegalerie Alte Meister decided in the course of the current restoration of the work to remove the overpaint. The painting can now be enjoyed looking just as it did when it left the artist’s studio.

A depiction of Cupid originally incorporated on the rear wall as a “painting within the painting” was later painted over again. As a result of the latest investigations and the current restoration of the painting, it has now been proven that this overpainting was not done by Vermeer himself but was executed by a different hand some years after the completion of the Girl Reading a Letter. It has not yet been possible to identify the originator of this overpainting that completely covered the background picture, including its broad black frame, nor to determine at what point in time it was performed.

Although only about half of the Cupid picture on the rear wall of the room has so far been exposed, the fundamental change to the overall impression of the painting is already evident. It is now clear that the Dresden Girl Reading a Letter is another one of the numerous interior scenes by Vermeer in which there is a “painting within the painting” located on the rear wall. In this case, the artist was probably quoting a painting in which a standing Cupid was depicted with an upright bow in his right hand and with his left arm raised. This motif is already known from three other interior paintings by Vermeer.

After being restored to its original condition, Vermeer’s Girl Reading a Letter at an Open Window will appear more overt and less muted than previously. The vivid, almost sculptural representation of Cupid painted in ochre and brown tones hanging directly above the delicate figure of the girl will be about the same size as the section of her body that is visible behind the table. The powerful presence of the Cupid figure, positioned in such a way as to face the viewer directly, will be seen as pregnant with meaning and constituting a “commentary” on the scene, thus contributing substantially towards the viewer’s interpretation of the painting. The representation of the god of love will probably be interpreted as a reference to the amorous context of this seemingly innocuous everyday scene. The highly conspicuous background picture will create a spatial counterweight to the introversion of the letter reader, thus leaving the content of the scene open. It is then up to the viewer to decide how to interpret the letter in the girl’s hand.

In any case, the anticipated result of the ongoing restoration of the Girl Reading a Letter will undoubtedly show that the elements of concealment and seclusion in this early work by Vermeer in fact play a less dominant role than has been implied over the past two and a half centuries owing to the alteration of the composition by a different hand.

The restoration – an interim report

When work began on restoring Johannes Vermeer’s Girl Reading a Letter at an Open Window in May 2017, it was possible to take advantage of numerous previous investigations. In 1965 Hermann Kühn had analysed paint samples taken from the painting. In 1979 the painting had been x-rayed and in 2009 it underwent infrared reflectography. In 2007 fabric structure analysis was performed on the picture support. In preparation for the exhibition “The Early Vermeer” in 2010, the painting underwent careful microscopic investigation, particularly with regard to the artist’s painting technique and the state of preservation. Since 2017, a further extensive programme of research has been an integral part of the current project.

Removal of the varnish

The first stage in the restoration process was the removal of multiple layers of varnish which had turned yellowish brown as a result of ageing. This coating had been applied in the 19th century and had been subsequently renewed several times. The removal of this varnish resulted in the subtle, cool colours of Vermeer’s original painting being rediscovered. It also became evident that the painting – apart from the edge areas – is in an excellent state of preservation, given that it is 360 years old.

During the removal of the varnish, it was found that the solubility properties of the paints in the central part of the background differed from those of the other areas of the painting. It was already known, from the x-ray images taken in 1979, that a “painting within the painting” existed on the rear wall of the room – a depiction of a naked Cupid that had been completely painted over. For a long time, this overpainting was attributed to Vermeer himself.