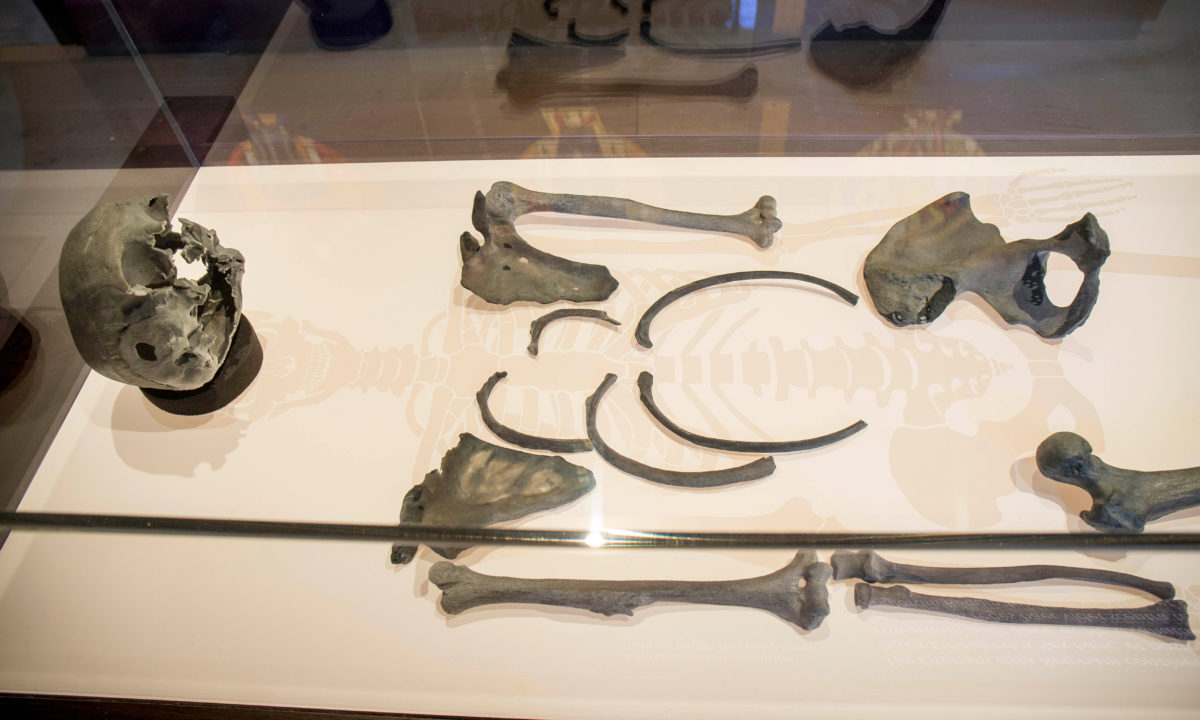 A team of archaeologists and anthropologists from the University of Bristol have been gradually unlocking the secrets hidden within Winchester Cathedral’s mortuary chests as part of an on-going research project supported by the Dean and Chapter of Winchester Cathedral.

It has long been believed that the six mortuary chests contain the mortal remains of pre-Conquest kings and bishops, but for many years this has merely been the subject of speculation. The bones had been co-mingled over the centuries and it was clear that the chests did not contain whole skeletons.

The conservation of the mortuary chests, which began in 2012, provided an opportunity for the scientific analysis of the contents for the first time.

Scientists from the University of Bristol’s Department of Anthropology and Archaeology have been working on the project for the past seven years, studying the contents and history of the chests to assess the likelihood of whether the human remains in the chests relate to the historical burial records. In 2015 a collaboration with the Radiocarbon Accelerator Unit at the University of Oxford revealed that the bones were from the late Anglo-Saxon and early Norman period, and these findings confirmed that the bones date from the same periods as the names on the chests, which include eight kings, two bishops and one queen, rather than being the result of later activity within the Cathedral.

The forensic project led by Professor Robson Brown involves recording the contents of the chests and determining the number of individuals represented, along with their sex, age at death and physical characteristics. Whilst still on-going, this project has already unearthed some fascinating and surprising results.

Working in the Lady Chapel at Winchester Cathedral, which became a temporary laboratory, the researchers reassembled over 1,300 human bones, with the aim of restoring the identity of the kings, one queen, and several bishops traditionally thought to be within the chests.

Each bone has been carefully measured and recorded, and at least 23 partial skeletons have been reconstructed, a remarkable finding in itself since it was originally believed that the mortuary chests contained the remains of no more than fifteen people.

The results of the radiocarbon dating were calibrated by estimating the ‘marine reservoir’ effect for each sample, since high status individuals ate large quantities of fish from the rivers and the sea which contain older radiocarbon.

The ability to identify the sex, age and physical characteristics of these individuals has resulted in some exciting discoveries, including the remains of a mature female dispersed within several chests.

It is not yet certain, but these bodily remains could be those of Queen Emma, daughter of Richard I, Duke of Normandy, the wife of two successive Kings of England, Ethelred and Cnut, and the mother of King Edward the Confessor and King Hardacnut. She was a powerful political figure in late Saxon England, and her family ties provided William the Conqueror with a measure of justification for his claim to the English throne.

Completely unexpected was the discovery of two juvenile skeletons, adolescent boys who had died between the ages of 10 to 15 years in the mid-11th to late 12th-century. Their presence in the chests was not recorded and their identity is still unknown, but they were almost certainly of royal blood.

The University of Bristol’s Professor Kate Robson Brown led the investigation. She said: “It has been a privilege to undertake the forensic analysis of this skeletal collection, and we are excited to be part of the project analysing and identifying the remains of the early monarchs and other high-status Anglo-Saxon individuals. The project is ongoing, and the exhibition in Winchester Cathedral opening on 21 May is unique opportunity to share the scientific process and our findings with the public.”

The continuing research is deepening our understanding of the early Anglo-Saxon kings and queens of England, and visitors can find out more about the project from 21 May when Winchester Cathedral launches its landmark National Lottery Funded exhibition Kings and Scribes: The Birth of a Nation. The Bristol team has co-produced the display of forensic science within the exhibition; bones of the female skeleton have been 3D printed and laid out as a key exhibit in the exhibition, and a facial reconstruction of one of the boys is also on display.

More exciting developments will be revealed over time as the investigation to identify the individuals in the chests continues. These discoveries could place Winchester Cathedral at the birth of our nation and establish it as the first formal royal mausoleum.