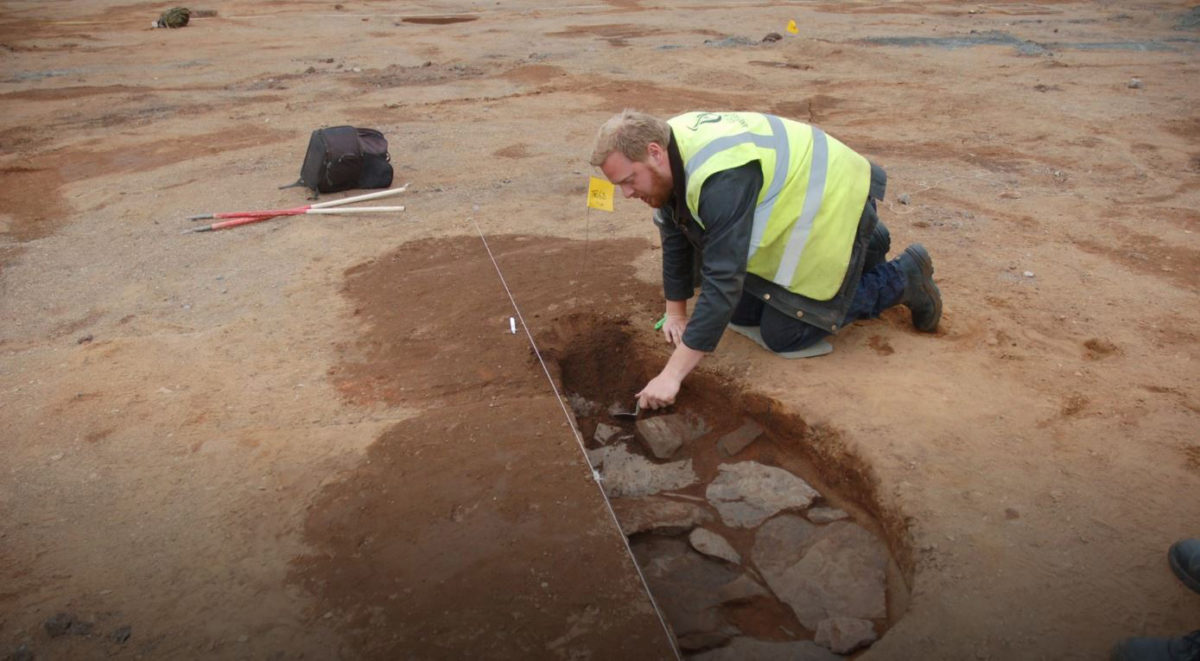 The discovery was made during archaeological excavations undertaken by GUARD Archaeology prior to the building of the new Ayr Academy in 2015. The GUARD Archaeologists discovered a hitherto unknown Roman marching camp that was constructed during the Roman conquest of Scotland.

At the time it was not obvious that a Roman camp had been found, because there were no Roman artefacts present, only fragments of much earlier Neolithic pottery and an Iron Age bangle from a seemingly random spread of pits and post-holes. However, during the subsequent post-excavation analyses, radiocarbon dates revealed a regular pattern of features that date to the Roman conquest of Scotland in the latter part of the first century AD.

‘The Roman features comprised 26 large, often double, fire-pits that were distributed evenly in two parallel rows 30m apart,’ said Iraia Arabaolaza, who directed the excavation and who will present the talk tomorrow. ‘The arrangement and uniformity of these features implies an organised layout and the evidence suggests that they were all used for baking bread.

The location of the oven was recognised by the scorching of the subsoil base, stone slabs and burnt clay fragments, some with wood imprints and with dome moulding. Ash pits were identified at the opposite end to the ovens within these figure-of-eight features, filled with burnt and charcoal-rich soil comprising the raked-out material from the clay-domed ovens.’

The radiocarbon dates from these fire-pits overlapped between the years AD 77-86 and AD 90, which accords with the conquest of Scotland by the Roman general Agricola from AD 79 until AD 88. Agricola’s son-in-law, Tacitus, who wrote an account of the yearly campaigns, reported that “in the fifth campaign, Agricola, crossing over, subdued, by frequent and successful engagements, several nations till then unknown; and stationed troops in that part of Britain which is opposite to Ireland.”

Until now, the only two known routes for the Roman invasion of southern Scotland were further to the east; the present-day M74 and A68 roads follow these same courses. But the new marching camp at Ayr reveals another route down the west coast towards the south-west tip of Scotland, from where Ireland is readily visible.

‘There was a ford across the river Ayr just below the Roman marching camp while ships may have been beached on the nearby shoreline’ said Iraia Arabaolaza. ‘The Ayr marching camp is 20 miles from the nearest Roman camp to the south at Girvan, which corresponds to a day’s march for a Roman soldier. There is a little more distance to other Roman camps to the north-east near Strathaven. Altogether this suggests that this site was chosen as a strategic location for the Roman conquest of Ayrshire.’

Roman marching camps have been described as the temporary bases of a tented army on campaign. Whilst most Roman camps are usually recognised by the regular linear ditches that enclose them, landscaping or ploughing at the Ayr Academy site appears to have destroyed any such remains. The camp at Ayr Academy, however, shares other similarities with Roman camps in Scotland, which have also revealed similar formations of fire-pits or camp-ovens. The distance of 30m between the two rows of fire-pits at Ayr Academy accords closely to the length of area allocated to the ten tents of a century in ancient Roman military manuals. The rectangular formation of fire-pits at Ayr Academy may represent the ground where up to eight centuries, amounting to 640 legionaries, were once encamped.

It is also possible that the archaeological remains only represent a portion of the camp, which may have extended into the flat land to the north, where the modern racecourse is situated.

The Romans, of course, were not the first people to occupy this site. While little trace of the local Iron Age people was recovered during the excavation, save a fragment of a shale bracelet which might date to this same period, the GUARD archaeologists uncovered numerous pits and post-holes that date to much earlier times.

Evidence for Bronze Age ritual activity from the late third and second millennium BC, a Neolithic settlement from the fourth millennium BC and a Mesolithic hunter/gatherer camp from the sixth millennium BC was also discovered, revealing this to be one of the earliest and most complex prehistoric sites in this area of the west coast of Scotland. To put this into perspective, the earliest occupation of the Ayr Academy site goes back to around 5200 BC, roughly 2½ times as old as the Roman Marching Camp is to us. As the excavation at Ayr Academy demonstrates, Scotland was not an untouched wild landscape that the Romans marched into in AD 79 but already an ancient land inhabited by communities whose culture and heritage stretched back millennia.