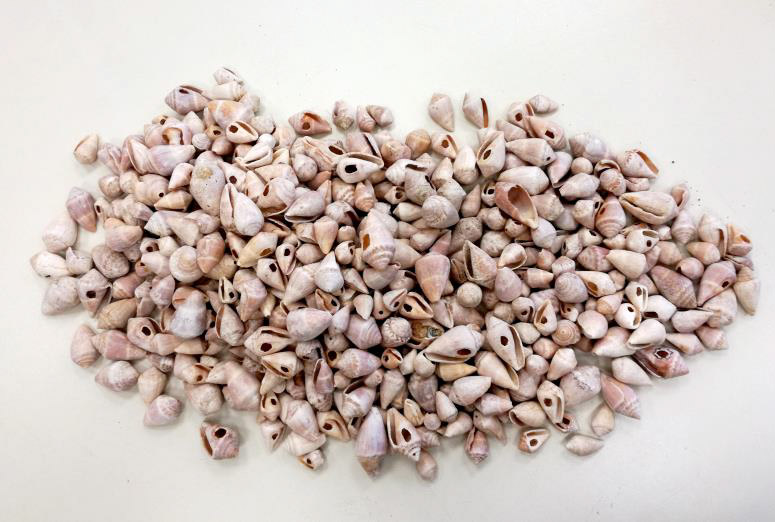 “In 1974 in room Θ3 of House Θ in the Southwest Quarter of the Mycenae citadel, an extraordinary find came to light: 545 conus mediterraneus ventricosus shells were found, packed together with 12 small objects in a
crevice of the natural bedrock, probably stored in a cloth or leather bag”, Dr Pliatsika says about the subject of the lecture. “Out of the total of 545, 353 cones were intentionally pierced and ground on one side, to form a flat surface, and 9 of them were filled with lead.”

”This special group includes the largest collection of cone shells known from the Late Bronze Age Aegean, but, despite its unique character, it has not been properly evaluated. After the final publication of the Southwest
Quarter excavation, it is now possible to attempt an interpretation of its use.

”In the course of this study, the find is examined in detail, in association with comparative evidence of large cone shell groups from the same cultural horizon. The facts suggest that the shells and the small lead
artefacts recovered from room Θ3 were counters for some kind of board game. In the light of this interpretation, relative context finds from the room Θ3 deposit are also examined.

”The study of the extraordinary find from Mycenae highlights the difficulty in identifying material remains of board games, which certainly existed in the Mycenaean age and were played by children and adults alike. The few cases where such remains are identified with near certainty, serve to prove
how fascinating this particular research field is, although neglected. Mostly, though, they underline the need to include the game – being a basic human activity- in the interpretations of the archaeological record from the Mycenaean period”, Dr Pliatsika concludes.

The 7th meeting of the Mycenaean Seminar will be on Thursday, June 6, at 18:00 at the Amphitheatre of the National Archaeological Museum (Tositsa 1). The lecture will be held in greek.