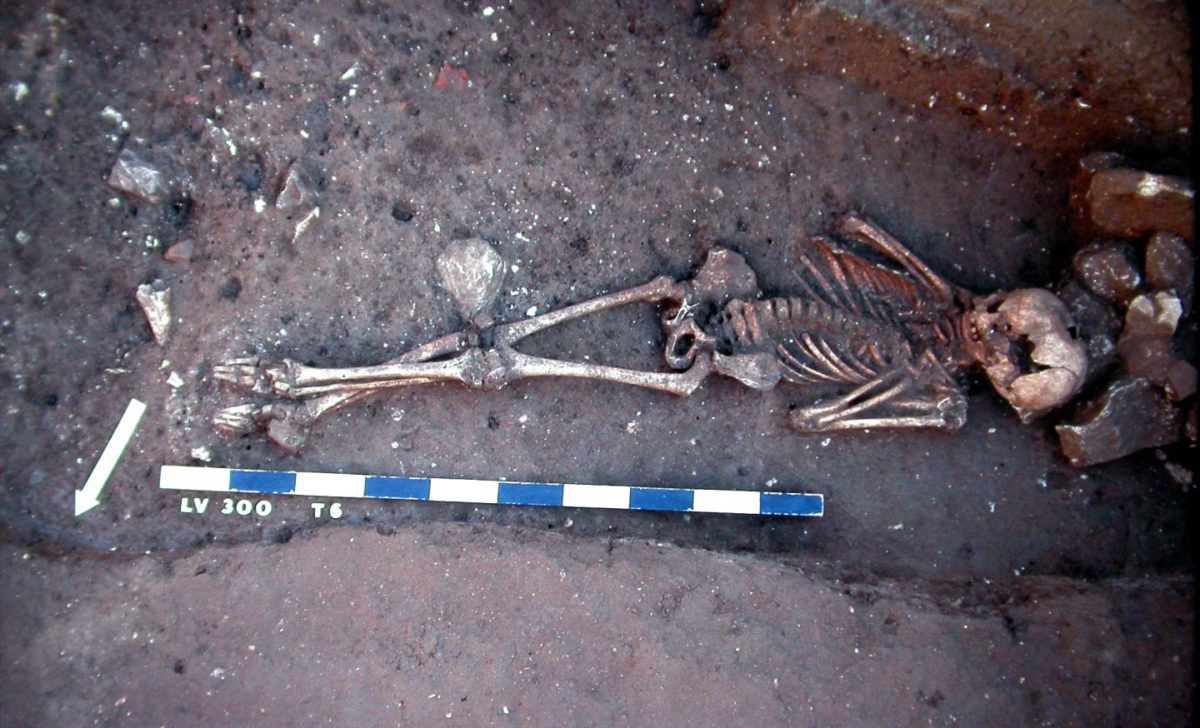 An international team of researchers has analyzed human remains from 21 archaeological sites to learn more about the impact and evolution of the plague-causing bacterium Yersinia pestis during the first plague pandemic (541-750 AD). In a study published in PNAS, the researchers reconstructed 8 plague genomes from Britain, Germany, France and Spain and uncovered a previously unknown level of diversity in Y. pestis strains. Additionally, they found the first direct genetic evidence of the Justinianic Plague in the British Isles.

The Justinianic Plague began in 541 in the Eastern Roman Empire, ruled at the time by the Emperor Justinian I, and recurrent outbreaks ravaged Europe and the Mediterranean basin for approximately 200 years. Contemporaneous records describe the extent of the pandemic, estimated to have wiped out up to 25% of the population of the Roman world at the time. Recent genetic studies revealed that the bacterium Yersinia pestis was the cause of the disease, but how it had spread and how the strains that appeared over the course of the pandemic were related to each other was previously unknown.

In the current study, an international team of researchers led by the Max Planck Institute for the Science of Human History analyzed human remains from 21 sites with multiple burials in Austria, Britain, Germany, France and Spain. They were able to reconstruct 8 new Y. pestisgenomes, allowing them to compare these strains to previously published ancient and modern genomes. Additionally, the team found the earliest genetic evidence of plague in Britain, from the Anglo-Saxon site of Edix Hill. By using a combination of archaeological dating and the position of this strain of Y. pestis in its evolutionary tree, the researchers concluded that the genome is likely related to an ambiguously described pestilence in the British Isles in 544 AD.

High diversity of Y. pestis strains during the First Pandemic

The researchers found that there was a previously unknown diversity of strains of Y. pestiscirculating in Europe between the 6th and 8th centuries AD. The 8 new genomes came from Britain, France, Germany and Spain. “The retrieval of genomes that span a wide geographic and temporal scope gives us the opportunity to assess Y. pestis‘ microdiversity present in Europe during the First Pandemic,” explains co-first author Marcel Keller, PhD student at the Max Planck Institute for the Science of Human History, now working at the University of Tartu. The newly discovered genomes revealed that there were multiple, closely related strains of Y. pestis circulating during the 200 years of the First Pandemic, some possibly at the same times and in the same regions.

Despite the greatly increased number of genomes now available, the researchers were not able to clarify the onset of the Justinianic Plague. “The lineage likely emerged in Central Asia several hundred years before the First Pandemic, but we interpret the current data as insufficient to resolve the origin of the Justinianic Plague as a human epidemic, before it was first reported in Egypt in 541 AD. However, the fact that all genomes belong to the same lineage is indicative of a persistence of plague in Europe or the Mediterranean basin over this time period, instead of multiple reintroductions.”

Another interesting finding of the study was that plague genomes appearing towards the end of the First Pandemic showed a big deletion in their genetic code that included two virulence factors. Plague genomes from the late stages of the Second Pandemic some 800-1000 years later show a similar deletion covering the same region of the genomes. “This is a possible example of convergent evolution, meaning that these Y. pestis strains independently evolved similar characteristics. Such changes may reflect an adaptation to a distinct ecological niche in Western Eurasia where the plague was circulating during both pandemics,” explains co-first author Maria Spyrou of the Max Planck Institute for the Science of Human History.

The current study offers new insights into the first historically documented plague pandemic, and provides additional clues alongside historical, archaeological, and palaeoepidemiological evidence, helping to answer outstanding questions. “This study shows the potential of palaeogenomic research for understanding historical and modern pandemics by comparing genomes across millennia,” explains senior author Johannes Krause of the Max Planck Institute for the Science of Human History. “With more extensive sampling of possible plague burials, we hope to contribute to the understanding of Y. pestis‘ microevolution and its impact on humans during the course of past and present pandemics.”