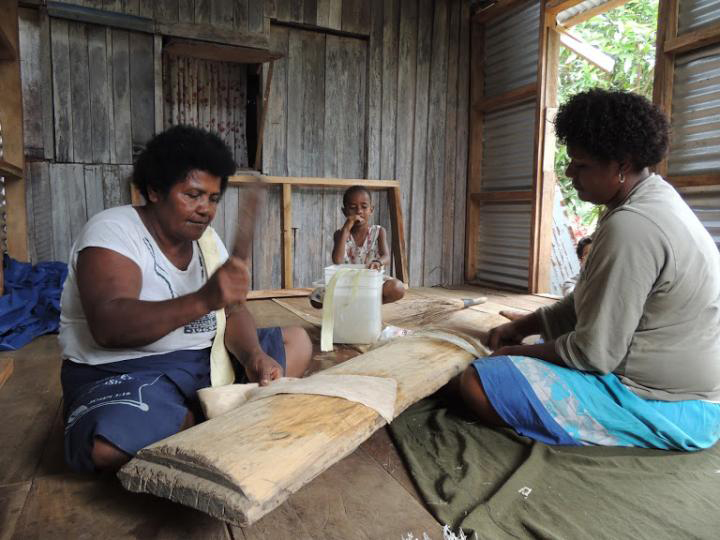 The migration and interaction routes of prehistoric humans throughout the islands of Oceania can be retraced using genetic differences between paper mulberry plants, a tree native to Asia cultivated for fibers to make paper and introduced into the Pacific in prehistoric times to make barkcloth. Daniela Seelenfreund of the University of Chile and Andrea Seelenfreund of the Academia de Humanismo Cristiano University, Chile report on prehistoric human movements based on the genetic analysis of this plant in a new paper published June 19 in the open-access journal PLOS ONE.

The colonization of the remote, long-uninhabited Pacific islands has fascinated early European explorers, current scientists and members of Pacific Island communities today. One way to study this migration, which occurred over the last 3,000 years, is to track the plants and animals that humans carried with them. One such plant is the paper mulberry. Native to Asia, it was transported by humans in their colonizing voyages across Oceania, and planted from New Guinea to Fiji, and to the remote islands to the east, such as Hawaii and Rapa Nui (Easter Island). In the current study, researchers analyzed 313 modern-day plant samples and 67 preserved specimens from herbariums with various genetic tools.

The analysis demonstrates the existence of a clear genetic structure in paper mulberry populations in Oceania, in spite of having been introduced only 3000 years ago into the region. The researchers also found that current plant populations have less genetic diversity than herbarium samples collected in the nineteenth and early twentieth century. The observed genetic structure reveals a general tendency of dispersion of the plant from west to east in agreement with archaeological, linguistic and other genetic data that indicates that the region was colonized and settled in this general direction. They also detected three centers of dispersion and interaction: one that includes the Tonga and Fiji archipelago, another between the islands of Samoa, Wallis and New Caledonia and finally a center of dispersion and interaction that includes all the islands and archipelagos of the east of the Polynesian triangle , that is, between Tahiti, Hawaii, Marquesas Islands, Austral Islands and Rapanui. The results obtained from this study allow inferring dispersion patterns that reflect the interactions between past human populations that inhabited the different island groups.

The genetic connections between modern and herbarium samples of paper mulberry detected in the study provide the most comprehensive picture to date of prehistoric human movements across Oceania. The genetic connections detected in contemporary and herbarium samples from paper mulberry reflect prehistoric human movements between multiple islands in Remote Oceania and, to date, provide a more comprehensive picture than other model species.

A. Seelenfreund adds: “This is the first study of a commensal species to show genetic structuring within Remote Oceania. Our data, based on the combined analysis of extant and herbarium paper mulberry samples from Oceania, is the result of a comprehensive sampling of 33 islands of Remote Oceania, and compared to samples from New Guinea, the Solomon Islands and Asia. Our data detect a complex structure of three central dispersal hubs linking West Remote Oceania with East Remote Oceania. despite its vegetative propagation and short timespan since its introduction into the region by prehistoric Austronesian speaking colonists.”