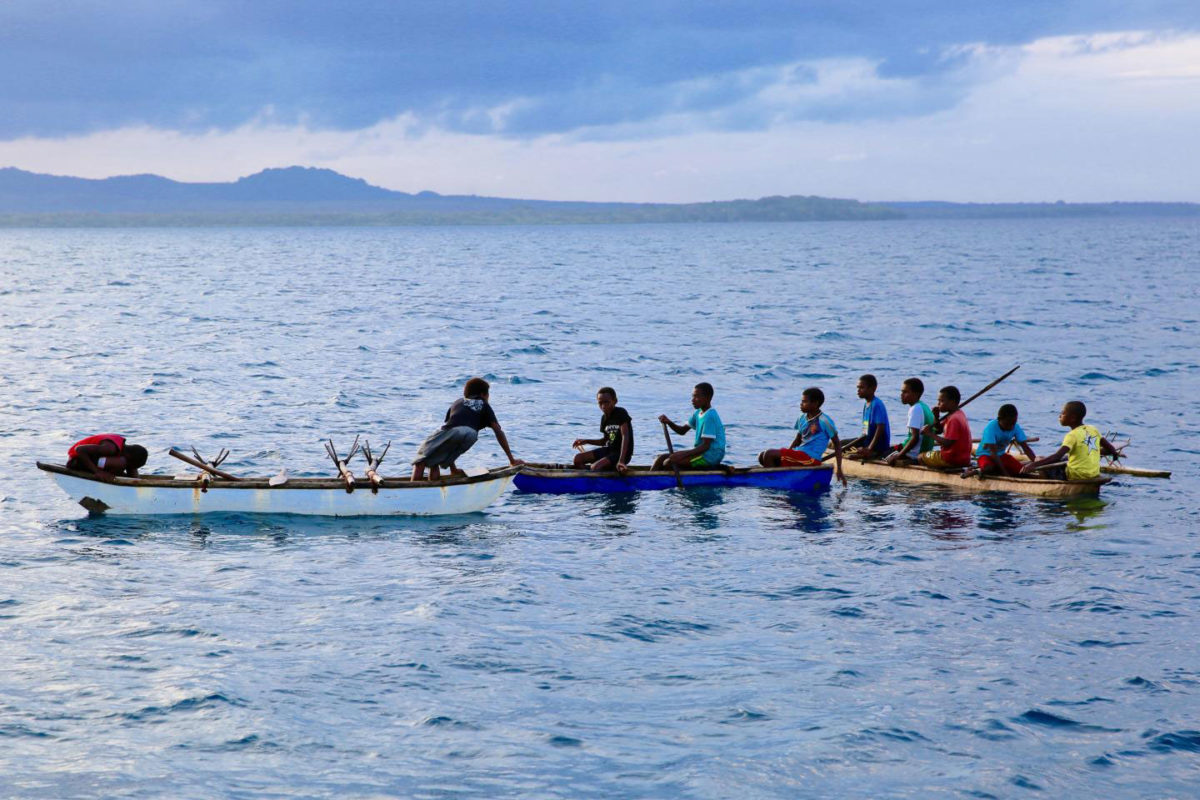 New genetic research reveals the complex demographic history of Vanuatu, explaining how Austronesian languages were retained throughout its history despite near-total replacement of early Austronesian-Lapita with Papuan ancestry.

The study, published in Nature Ecology & Evolution and led by a multidisciplinary research team at the Max Planck Institute for the Science of Human History (MPI-SHH) together with researchers in France, Australia, New Zealand, Germany and Vanuatu, reveals that migrations of people from the Bismarck Archipelago in Oceania to the previously settled islands of the Pacific began as early as 2,500 years ago, much earlier than previously thought. The Remote Oceanian island nation of Vanuatu is the gateway to the rest of the Pacific and understanding its demographic history is critical to uncovering that of the wider region. The earliest inhabitants of Vanuatu, arriving about 3,000 years ago, were the Lapita peoples who spoke a form of Austronesian language and who had largely East Asian genetic ancestry. But Vanuatu’s contemporary population has largely Near Oceanian heritage, showing that over time the genetic ancestry of the early inhabitants was mostly replaced by that of Bismarck Archipelago migrants, who began arriving very soon after initial settlement. Yet the original Austronesian language persisted and over 120 descendant languages continue to be spoken today, making Vanuatu the per capita most linguistically diverse place on Earth. Vanuatu therefore presents an unprecedented case, where a population’s genetic ancestry but not its languages were replaced. Through analyses of new ancient and modern genome-wide data, the researchers show that rather than occurring in one wave, the genetic replacement was long and complex, likely the result of a sustained long-distance contact between Near and Remote Oceania. This provides demographic support for a model from historical linguistics, in which the initial Austronesian language of Vanuatu survived by being continually adopted by incoming Papuan migrants.

The Austronesian Expansion, which began around 5,500 years ago likely in modern-day Taiwan, was the most geographically extensive dispersal of farming peoples in prehistory, ultimately carrying people as far west as Madagascar and all the way east to Rapa Nui. These seafaring Neolithic people initially expanded out across Island Southeast Asia, carrying farming technology and a major branch of the Austronesian language family, eventually reaching Near Oceania where they encountered the indigenous Papuan peoples of New Guinea and the Bismarck Archipelago. The initial settlement east beyond the Solomon Islands and out into Remote Oceania only began around 3,000 years ago, with Austronesian-speaking groups associated with the Lapita pottery culture rapidly expanding east out to Vanuatu, New Caledonia, Fiji and the islands of Western Polynesia. A previous ancient DNA study of Lapita burial sites has shown that these earliest inhabitants had East Asian ancestry with negligible evidence of Papuan genetic admixture. But the present-day genetic make-up of Remote Oceania suggests at least some degree of Papuan ancestry, meaning there must have been subsequent Papuan migration and admixture into the Pacific from Near Oceania.

In order to understand this previously undescribed migration, a multidisciplinary team of researchers brought together different lines of evidence from the fields of genetics, archaeology and linguistics. They generated genome-wide data from the bones and teeth of 19 ancient individuals from across Vanuatu, Tonga, French Polynesia and the Solomon Islands, a significant addition to the ancient DNA record in a region whose environmental conditions generally leads to poor ancient DNA preservation. As co-lead author Kathrin Nägele of the MPI-SHH says, “The identification of the petrous bone, which has recently been shown to provide fantastic aDNA preservation, has been a real game changer for such regions that were previously considered to be almost inaccessible.” The ancient DNA was complemented by new contemporary genome-wide data from 27 present-day inhabitants of Vanuatu, collected as part of a long-term linguistic and anthropological fieldwork project run by co-authors Professor Russell Gray and Dr. Heidi Colleran of the MPI-SHH.

The ancient DNA provided direct evidence that Papuan people began arriving in Vanuatu soon after initial settlement by Austronesians. “We found a genetically Papuan-related individual dating to around 2,500 years ago in Vanuatu, far earlier than had been previously estimated using only modern genetic data,” explains co-lead author Dr. Cosimo Posth, also of the MPI-SHH. The researchers were able to show that the ancestry of the initial Austronesian inhabitants of Vanuatu has been largely replaced by ancestry from Papuan peoples coming from the Bismarck Archipelago. But this genetic replacement was not straightforward, as Dr. Posth says, “Our analyses show that this replacement did not occur in a one-time mass migration event but rather happened incrementally over time, suggesting an enduring long-distance network between groups in Near and Remote Oceania.” The authors also directly described ancient individuals with sex-biased admixture, where Papuan males intermixed with Austronesian women, as long assumed based on analyses of the modern genetic make-up of the South Pacific.

Yet despite this genetic replacement, the people of present-day Vanuatu continue to speak languages descended from those spoken by the initial Austronesian inhabitants rather than any Papuan language of the incoming migrants. As Professor Gray, Director of the Department of Linguistic and Cultural Evolution at the MPI-SHH, says, “Population replacement with language continuity is extremely rare – if not unprecedented – in human history. The linguist Bob Blust has long argued for a model in which a separate Papuan expansion reaches Vanuatu soon after initial Austronesian settlement, with the initial, and likely undifferentiated, Austronesian language surviving as a lingua franca for diverse Papuan migrant groups.” Dr. Adam Powell, senior author of the study and also of the MPI-SHH, continues, “The demographic history suggested by our ancient DNA analyses provides really strong support for this historical linguistic model, with the early arrival and complex, incremental process of genetic replacement by people from the Bismarck Archipelago. This provides a compelling explanation for the continuity of Austronesian languages despite the almost complete replacement of the initial genetic ancestry of Vanuatu.”

The study in particular highlights the importance of interdisciplinary work and the value that multiple lines of evidence can have in deepening our understanding of human history. As Professor Johannes Krause, a senior author and Director of the Department of Archaeogenetics at the MPI-SHH, explains, “This multidisciplinary work has begun to uncover the complex, localized demographic processes that drove the initial colonization of the wider South Pacific and formed the enduring cultural and linguistic spheres that continue to shape the Pacific today.” Ongoing engagement with local communities in Vanuatu, as well as with the Vanuatu Cultural Center, has been critical to this success. As Dr. Colleran points out, “One strength of this study is the degree to which we are collaborating with communities in Vanuatu who have a real stake in these results and who generously volunteered their data to help answer these questions. We will be back in the field very soon to share the results with those communities and to hear their thoughts on the whole process.” The progress of this continuing fieldwork can be followed on the Nature Ecology & Evolution Community website.