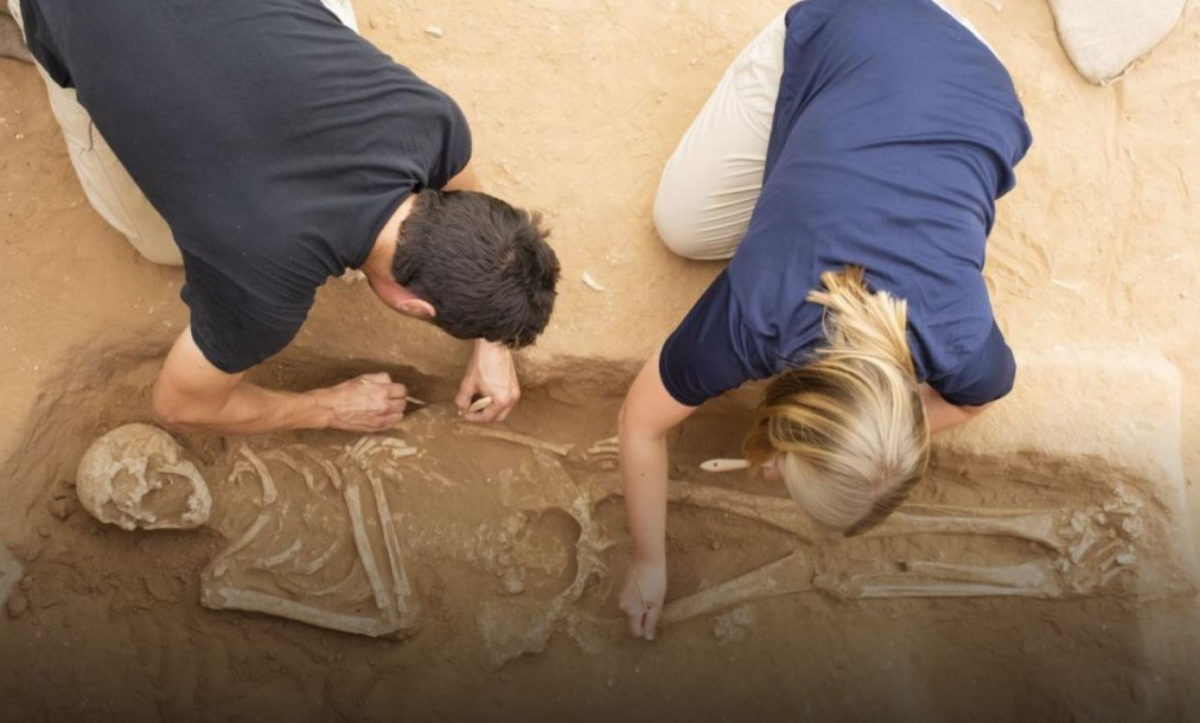 Ancient DNA sheds light on the origins of the Biblical Philistines

An international team, led by scientists from the Max Planck Institute for the Science of Human History and the Leon Levy Expedition, retrieved and analyzed, for the first time, genome-wide data from people who lived during the Bronze and Iron Age (~3,600-2,800 years ago) in the ancient port city of Ashkelon, one of the core Philistine cities during the Iron Age. The team found that a European derived ancestry was introduced in Ashkelon around the time of the Philistines’ estimated arrival, suggesting that ancestors of the Philistines migrated across the Mediterranean, reaching Ashkelon by the early Iron Age. This European related genetic component was subsequently diluted by the local Levantine gene pool over the succeeding centuries, suggesting intensive admixture between local and foreign populations. These genetic results, published in Science Advances, are a critical step toward understanding the long-disputed origins of the Philistines.

The Philistines are famous for their appearance in the Hebrew Bible as the arch-enemies of the Israelites. However, the ancient texts tell little about the Philistine origins other than a later memory that the Philistines came from “Caphtor” (a Bronze Age name for Crete; Amos 9:7). More than a century ago, Egyptologists proposed that a group called the Peleset in texts of the late twelfth century BCE were the same as the Biblical Philistines. The Egyptians claimed that the Peleset travelled from the “the islands,” attacking what is today Cyprus and the Turkish and Syrian coasts, finally attempting to invade Egypt. These hieroglyphic inscriptions were the first indication that the search for the origins of the Philistines should be focused in the late second millennium BCE. From 1985-2016, the Leon Levy Expedition to Ashkelon, a project of the Harvard Semitic Museum, took up the search for the origin of the Philistines at Ashkelon, one of the five “Philistine” cities according to the Hebrew Bible. Led by its founder, the late Lawrence E. Stager, and then by Daniel M. Master, an author of the study and director of the Leon Levy Expedition to Ashkelon, the team found substantial changes in ways of life during the 12th century BCE which they connected to the arrival of the Philistines. Many scholars, however, argued that these cultural changes were merely the result of trade or a local imitation of foreign styles and not the result of a substantial movement of people.

This new study represents the culmination of more than thirty years of archaeological work and of genetic research utilizing state of the art technologies, concluding that the advent of the Philistines in the southern Levant involved a movement of people from the west during the Bronze to Iron Age transition.

Genetic discontinuity between the Bronze and Iron Age people of Ashkelon

The researchers successfully recovered genomic data from the remains of 10 individuals who lived in Ashkelon during the Bronze and Iron Age. This data allowed the team to compare the DNA of the Bronze and Iron Age people of Ashkelon to determine how they were related. The researchers found that individuals across all time periods derived most of their ancestry from the local Levantine gene pool, but that individuals who lived in early Iron Age Ashkelon had a European derived ancestral component that was not present in their Bronze Age predecessors.

“This genetic distinction is due to European-related gene flow introduced in Ashkelon during either the end of the Bronze Age or the beginning of the Iron Age. This timing is in accord with estimates of the Philistines arrival to the coast of the Levant, based on archaeological and textual records,” explains Michal Feldman of the Max Planck Institute for the Science of Human History, leading author of the study. “While our modelling suggests a southern European gene pool as a plausible source, future sampling could identify more precisely the populations introducing the European-related component to Ashkelon.”

In analyzing later Iron Age individuals from Ashkelon, the researchers found that the European related component could no longer be traced. “Within no more than two centuries, this genetic footprint introduced during the early Iron Age is no longer detectable and seems to be diluted by a local Levantine related gene pool,” states Choongwon Jeong of the Max Planck Institute of the Science of Human History, one of the corresponding authors of the study.

“While, according to ancient texts, the people of Ashkelon in the first millennium BCE remained ‘Philistines’ to their neighbors, the distinctiveness of their genetic makeup was no longer clear, perhaps due to intermarriage with Levantine groups around them,” notes Master.

“This data begins to fill a temporal gap in the genetic map of the southern Levant,” explains Johannes Krause of the Max Planck Institute for the Science of Human History, senior author of the study. “At the same time, by the zoomed-in comparative analysis of the Ashkelon genetic time transect, we find that the unique cultural features in the early Iron Age are mirrored by a distinct genetic composition of the early Iron Age people.”