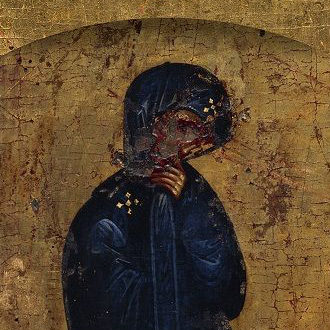 Opens today at the Byzantine and Christian Museum

by Archaeology Newsroom
Our Sacred Beauty. Byzantine icons from Thessaloniki was organized in the Holy Patriarchal Monastery of Vlatadon, on the occasion of the completion of the jubilee of the Patriarchal Foundation for Patristic Studies in 2018. The exhibition opens today in the Byzantine and Christian Museum. It will run through October 31, 2019.
The core of the exhibition includes icons from the sacristy of the Vlatadon Monastery, in which, some others have been added, preserved for centuries in churches of the city, as well as in the wide area, and abroad. Most of these icons are today on display in the Byzantine and Christian Museum. These icons are accompanied by icons originated from churches of Thessaloniki, belonging to the Byzantine and Christian Museums  collections. All the icons are excellent samples of the magnificent art produced in the workshops of Thessaloniki and Constantinople, highlighting in a silent but dynamic way the sacred beauty that was born in the city of Thessaloniki as well as its unbroken relation with the Byzantine capital of Constantinople.
The main part of byzantine icons from Thessaloniki depicts the Holy Mother, which was notably venerated in the city. The majority of her icons reproduce the type of Left-handed Hodegetria, following the patterns of Constantinople, whereas there are found other iconographical types as well, such as the Right-handed (Dexiokratousa) or Orans. Lastly, the names given to the Holy Mother, such as The Hope of the Hopeless, the Mediator, are of great interest, since they reflect the atmosphere of the city, just before its Ottoman conquest. Among the most important byzantine icons originated from Thessaloniki, there are some in which Christ Pantokrator is depicted.
The artistic production of byzantine Thessaloniki was strongly connected with the painting of portable icons in which there were depicted saints that were particularly worshipped in the city and in the wider area. At the same time, the close connection of Thessaloniki with Mount Athos had as a result, the production of  icons with the depiction of saints of Mount Athos, such as Saint Athanasios the Athonite.
The liturgical life of monasteries included a large number of ceremonies and processions, in the framework of which, the processional icons were carried around the churches. The church of Hagios Nikolaos Orphanos, a dependency of the Holy Patriarchal and Stavropegic Monastery of Vlatadon in Thessaloniki, preserved two very important, processional icons of high quality. In both of them, the Holy Mother is depicted in the first side, whereas in the other side the Apostles St Peter and Paul and the Three Hierarchs are represented.