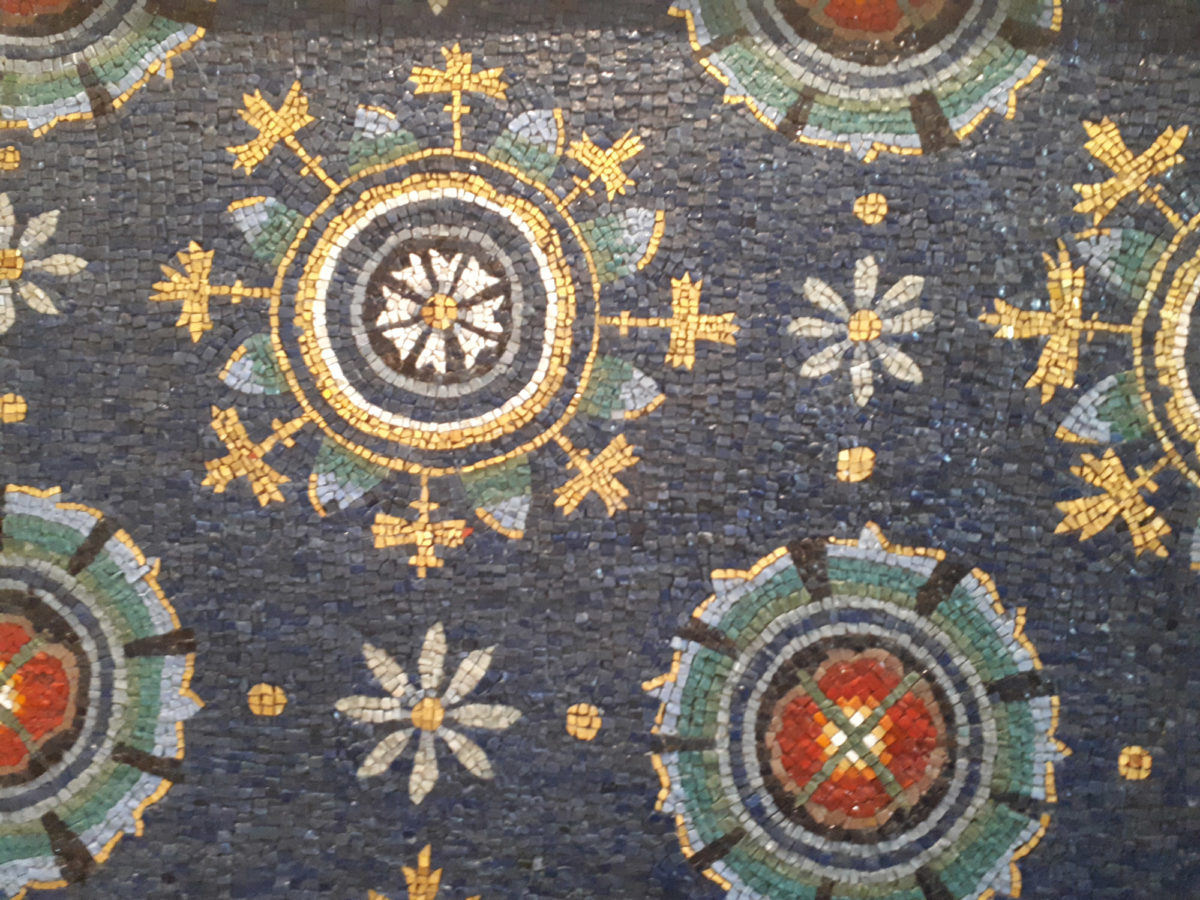 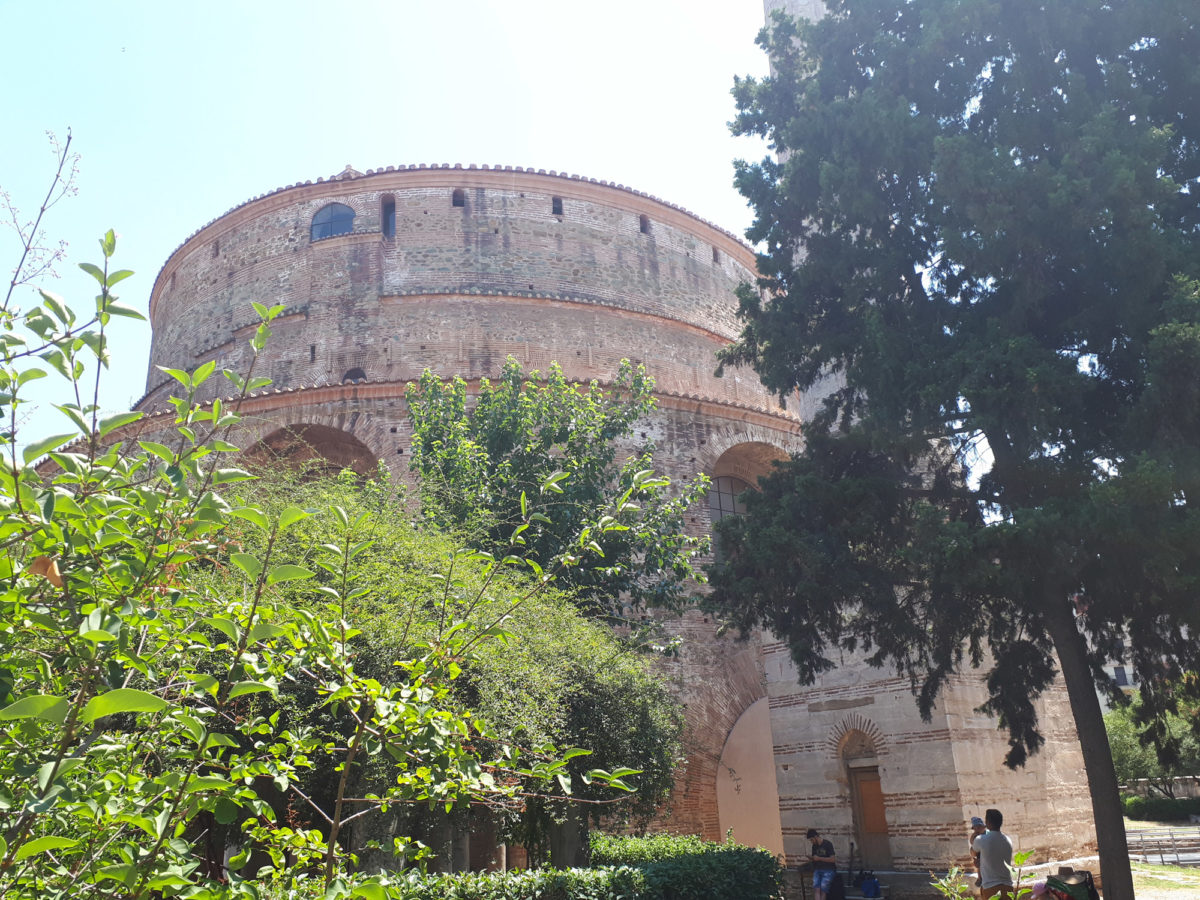 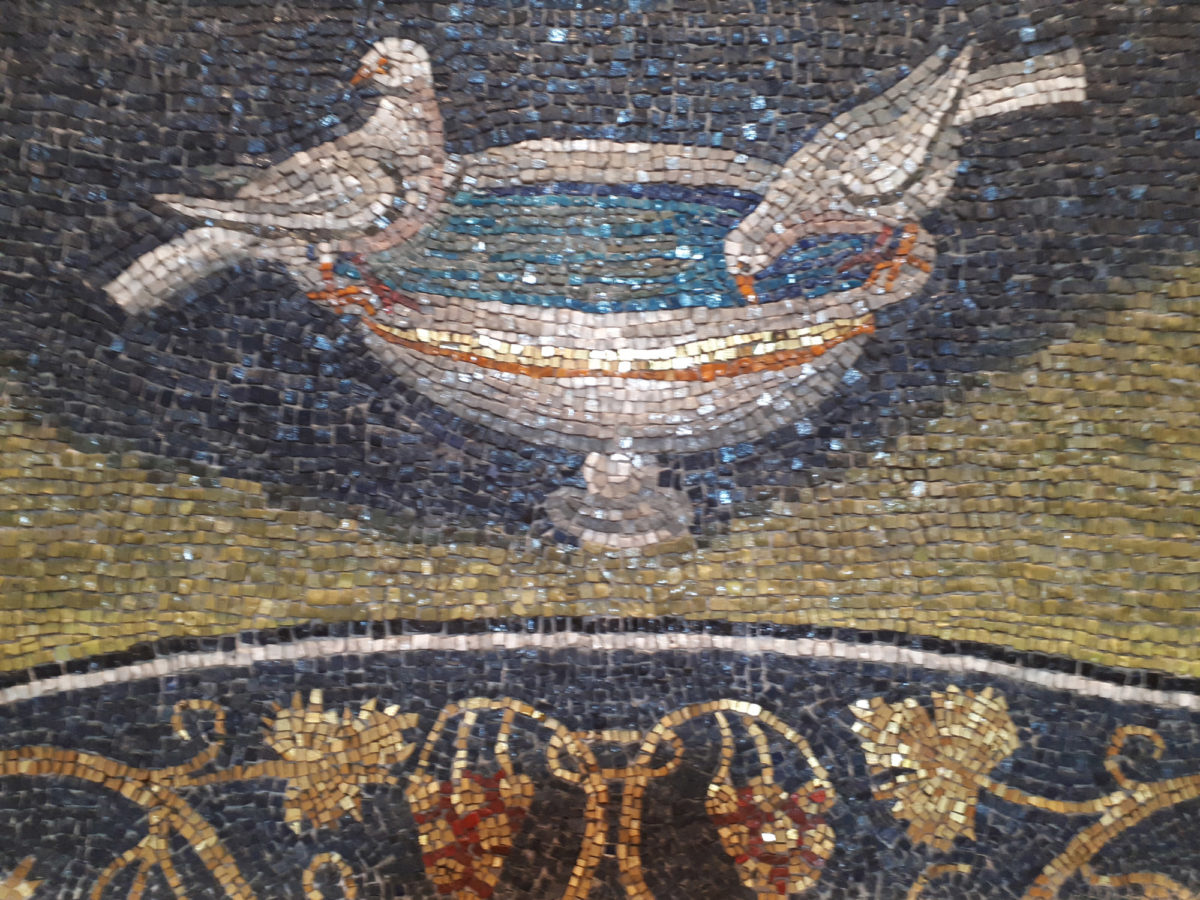 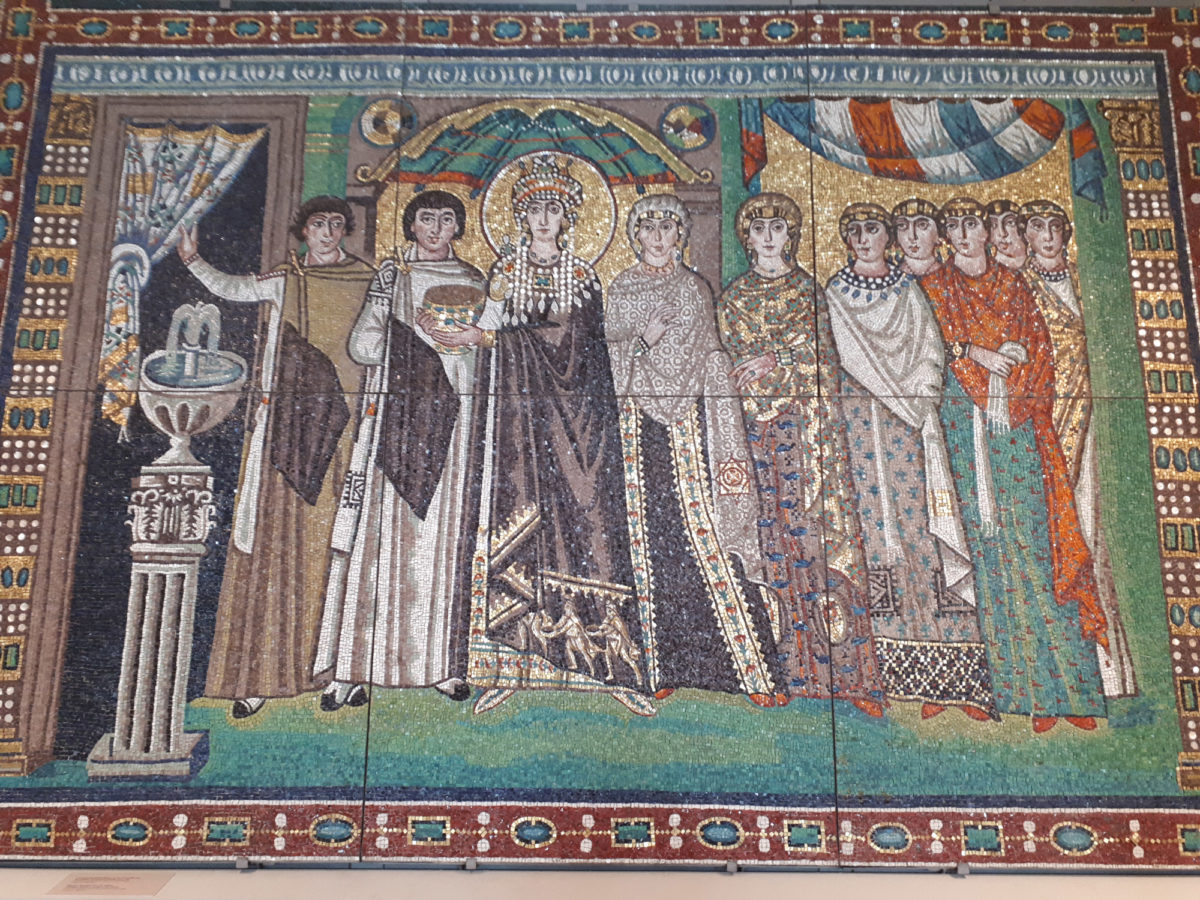 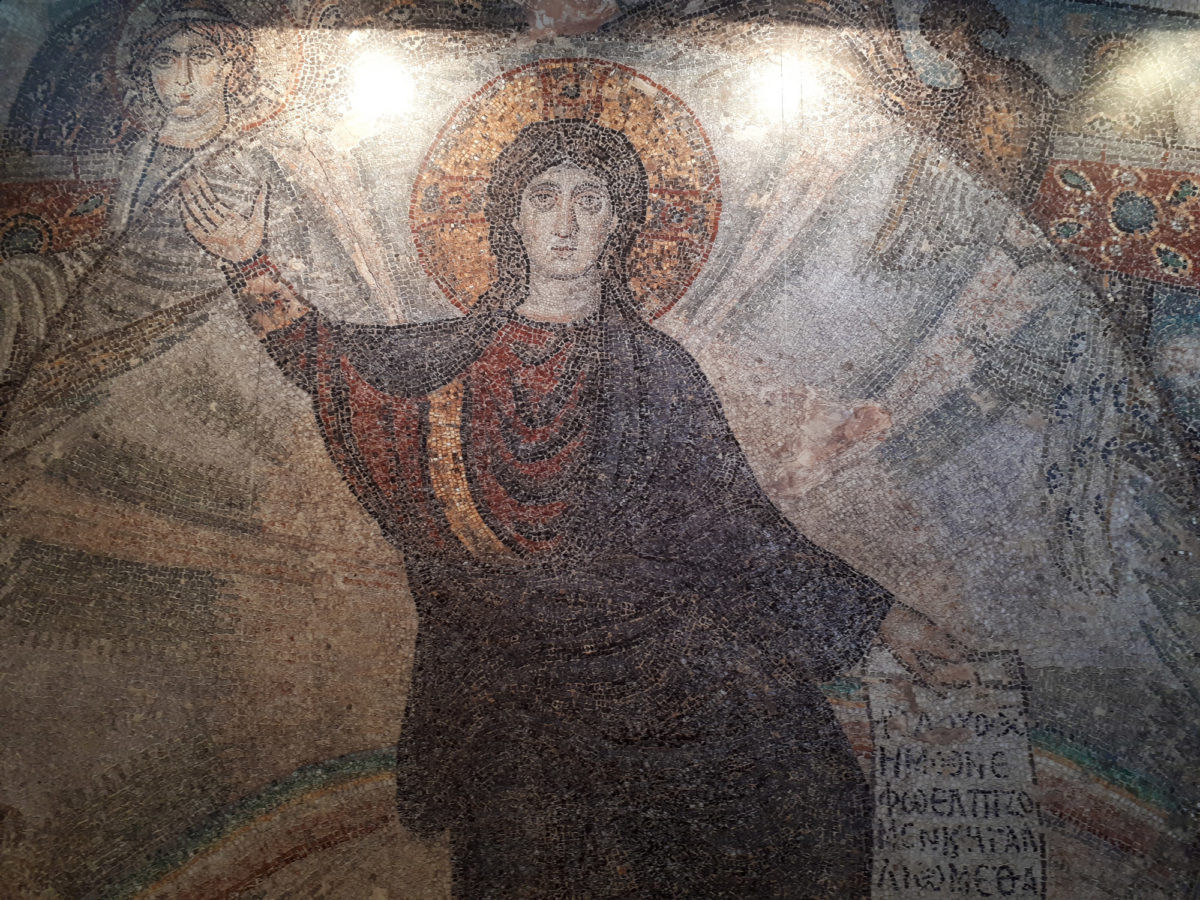 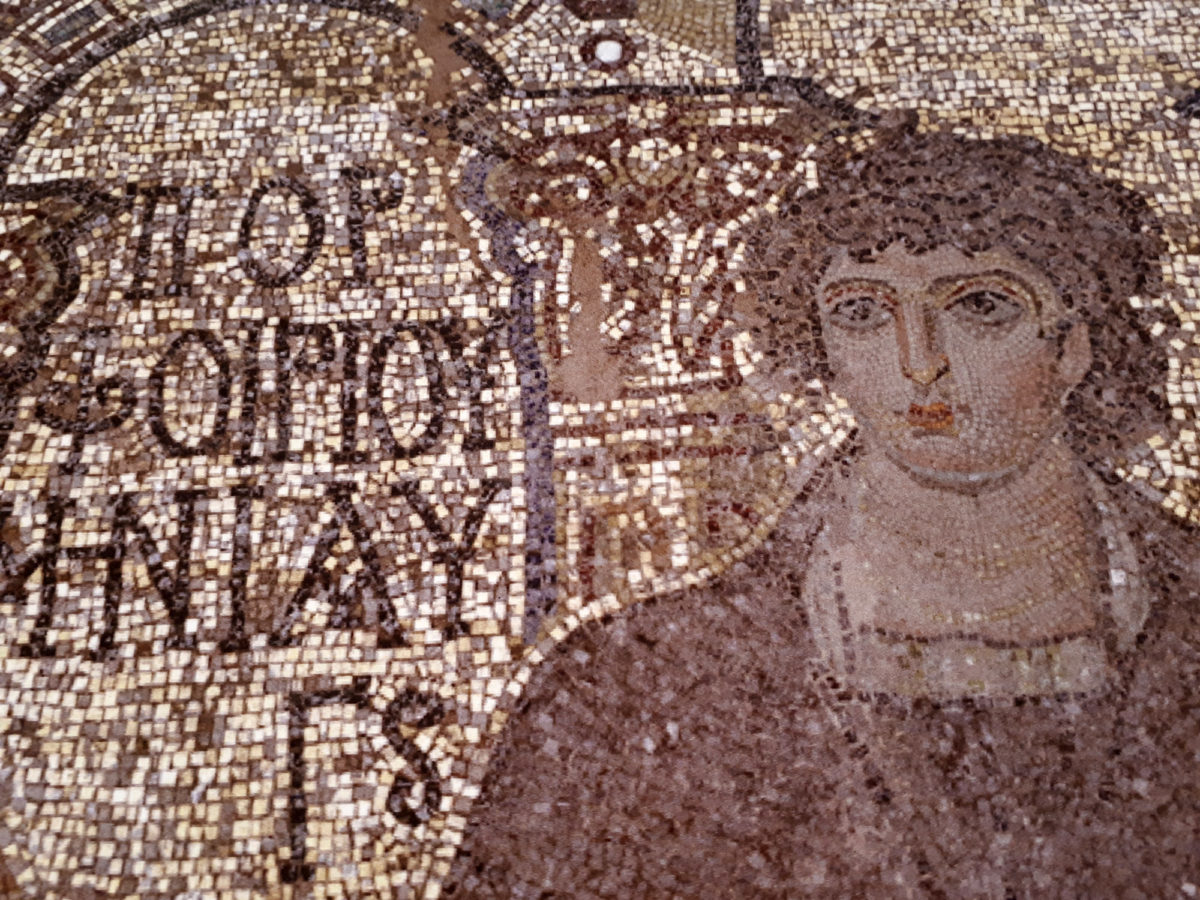 Mosaics of Thessaloniki and Ravenna ‟converse” at the Rotunda

In the exhibition "The glow of the mosaic"

Mosaics have recently been ‟conversing” in the circular, palimpsest like monument of the Rotunda in Thessaloniki, standing since it was first built in the 4th century; mosaics from Thessaloniki, one of the most important centres of their production in the Byzantine Empire and from Ravenna, a city also known for its impressive mosaics.

Reproductions of the procession of Empress Theodora and her retinue, as well as an imaginary depiction of Jerusalem from Ravenna’s San Vitale Monument, display their striking colours. Quite higher up, on the first zone of the Rotunda’s ceiling, two-storey buildings are depicted from the stages of Greco-Roman theaters, with standing figures of praying saints, ornate decorative motifs, peacocks, fabrics and censers; all rendered in vivid and bright golden colouring.

The decorative elements on the Rotunda arches with flowers, plants and geometric motifs as their main subject matter, seem to have a great affinity with the plants depicted in the mosaics of the Mausoleum of Galla Placidia. Moreover, the Rotunda itself, architecturally unique in Greece, is similar to the Orthodox and Arian baptisteries in Ravenna.

The above “conversations” take place in the exhibition “The glow of the mosaic, authentic and copies from Thessaloniki and Ravenna”, organized by the Department of Archaeological Museums, Exhibitions and Educational Programmes of the Ministry of Culture and Sports, in collaboration with the Ephorate of Antiquities of Thessaloniki and the Municipality of Ravenna, with the support of the Italian Ambassador to Athens.

“It was proposed to the Ministry that for historical reasons copies of the Ravenna mosaics created in Italy in the 1950s be transported to Greece as part of an exhibition on mosaics. Then the Department of Archaeological Museums, Exhibitions and Educational Programmes of the Ministry of Culture, rightly suggested that it was best to house them in the Rotunda, an ideal spot where the mosaics could ‘converse’ with those of Thessaloniki. We developed the project a little further and said ‘yes’ to ‘conversations’ with all the mosaics of that same era, namely those of Saint Demetrius, the Acheiropoietos and the Latomos Monastery. But as we cannot bring the actual monuments here, we display these mosaics through visual material,” said head of the Ephorate of Thessaloniki Antiquities George Skiadaresis, taking journalists round the exhibition that will run until the end of October.

“We also tried to create a parallel narrative on the two workshops of Ravenna and Thessaloniki. In this context, and for documentation purposes, high-resolution photos of the ceiling mosaics have been placed in the center of the Rotunda so that the visitor can see the figures up close and thus compare the two workshops,” he noted.

Specifically regarding the copies of the Ravenna mosaics, he pointed out that they are highly skilled. “Since the 1950s, on the initiative of Professor Giuseppe Bobini, artists from the Academy of Fine Arts in Ravenna produced copies of fragments of scenes from mosaics ,in the general spirit prevailing in the 19th century of reproducing frescoes or mosaics for historical reasons” he said. However, he pointed out that compared to Greece, a completely different approach prevails in Italy where the mosaics are completed.

“We show things more realistically” he noted and referring to the mosaics created in Thessaloniki, he emphasized the details of the figures, the gradation of the tesserae for them to become smaller when showing details of the faces and the transcendental content of the depictions.

“In my opinion the mosaics of Thessaloniki are outstanding.It is as if the artists of Thessaloniki are painting; as if they’re using paint brushes. When using small stones, it is extremely difficult to achieve such detail and such a gradation in size and hue of the tesserae. Besides, we are looking at a depiction of the sanctuary of a celestial church, because Byzantine art portrays individuals as celestial transcendental beings. A face in a Byzantine wall mosaic has the classic features of a person but rendered unrealistically,” George Skiadaresis pointed out.

As a typical example he referred to the saints depicted on the Rotunda ceiling giving their place to angels holding an intricate circular symbol of glory with Christ at its centre and a palm tree symbolizing immortality. Another telling example of a detail in the images of the Thessaloniki mosaics is a very rare representation surviving in the Monastery of Latomos or Osios David, as the monument is usually called. The rare theme of the Epiphany is shown, where Christ appears as a child in the middle of the circular symbol of glory out of which come figures symbolizing the four Evangelists.

Talking about the actual Rotunda, Mr Skiadaresis pointed out that it represents and retains all three cultures: Roman, Byzantine and Ottoman. “The Pantheon of Rome is the corresponding building to the Rotunda and similar to it” he said, pointing out that “It was placed at the tip of axis leading to the Galerian complex” to be used either as a sanctuary or to house the Galerius Mausoleum itself. This did not happen however, but according to a more recent argument it was built a few years later by Constantine the Great to become his own mausoleum. After Christianity prevailed, the building was converted into a church with the necessary adaptations. The chancel was thus constructed and towards the end of the 4th century it was decorated with ornate mosaics. Part of the mosaic decoration appears darker today because it was there that a painted representation of it was made at the end of the 19th century.