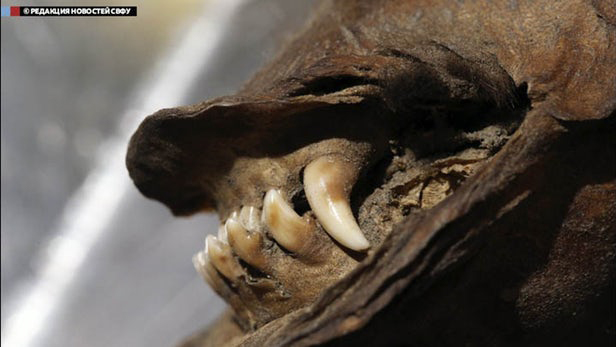 Gene transcripts from ancient wolf analyzed after 14,000 years in permafrost

RNA — the short-lived transcripts of genes — from the “Tumat puppy”, a wolf of the Pleistocene era has been isolated, and its sequence analyzed in a new study by Oliver Smith of the University of Copenhagen and colleagues publishing on July 30 in the open-access journal PLOS Biology. The results establish the possibility of examining a range of RNA transcripts from ancient organisms, a possibility previously thought to be extremely unlikely because of the short lifespan of RNA.

DNA, which encodes the “hard copy” of genes, is known to survive for thousands of years under favourable conditions. But RNA — the short-lived working copy of a gene, which is transcribed from DNA in the cell and forms the instructions for making proteins — is rapidly broken down in living tissue by a suite of recycling enzymes. That instability typically continues after death, and because of that, researchers have generally assumed that the likelihood of finding intact an ancient cell’s complement of RNA — its transcriptome — was vanishingly small. But there have been a few exceptions, mostly in plants, which led the authors to ask whether there might be ancient animal transcriptomes well-preserved enough to be sequenced.

They isolated and analyzed RNA from liver tissue of a 14,300-year-old canid, possibly a wolf or partially domesticated wolf-like creature, that had been preserved in Siberian permafrost until its discovery, as well as tissue from two 19th- and 20th-century wolves for comparison. Using a variety of transcriptomic techniques and quality control measures, the team showed that the RNA sequenced from the Pleistocene-era canid was truly representative of the animal’s RNA, with many liver-specific transcripts that matched more modern samples from both wolves and dogs.

The Siberian canid’s transcriptome is the oldest RNA sequenced by far, surpassing the next oldest transcriptome by at least 13,000 years. The authors note that unlike paleo-genomics, paleo-transcriptomics is unlikely to become routine, because even in the best conditions, RNA is not as well preserved as DNA.

Nonetheless, there are likely to be a large number of other naturally frozen specimens for which deciphering the transcriptome is possible, opening up for researchers not just the genes of ancient organisms, but the flux of cellular activity encoded by the transcriptome.

“Ancient DNA researchers have previously been reluctant to attempt to sequence ancient RNA because it is generally more unstable than DNA, and more prone to enzymatic degradation,” said Dr Smith. “However, following our recent successes in sequencing ancient RNA from plant material, we speculated that a well-preserved animal specimen, frozen in the permafrost, just might retain enough material to sequence. To our delight, we found that not only did we find RNA from various tissues, but in some case the signal was so strong that we could distinguish between tissues in a way that makes biological sense.

“Knowing that RNA acts as an intermediary between DNA and proteins, both of which are more stable, it might be tempting to ask, ‘so what?’. But we think the future of ancient RNA has great potential. For example, many of the most clinically relevant viruses around today have RNA genomes, and the RNA stage is often crucial to understanding the intricacies and complexities of gene regulation. This might have repercussions when discussing the environmental stresses and strains that drive evolution.”